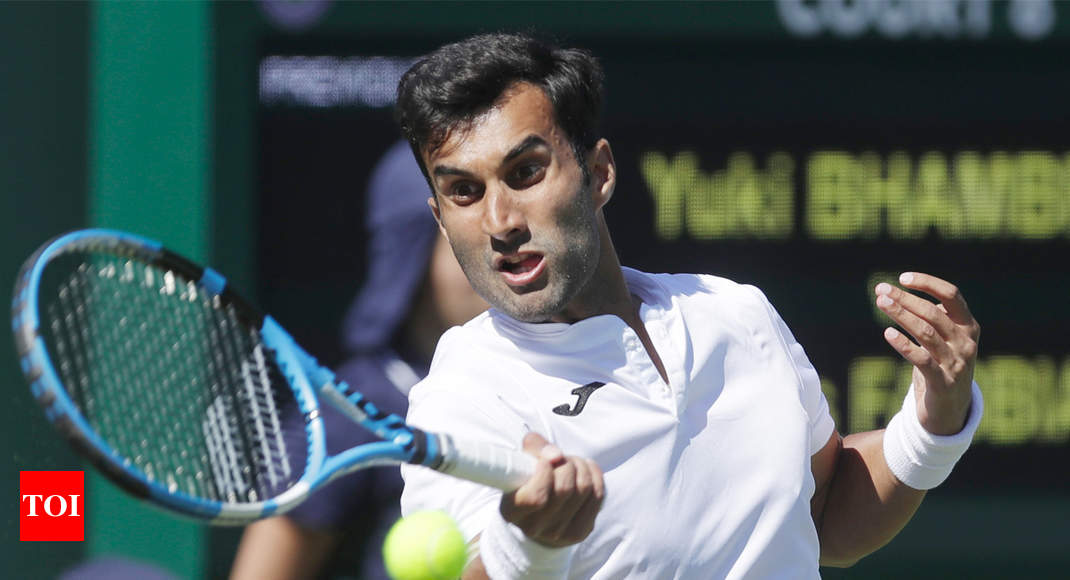 LONDON: India No. 1 Yuki Bhambri made his Wimbledon main draw debut in miss-matched gear, he paired Asics shorts with a round-neck tee that carried an unrecognizable logo.
The 25-year-old is one of the few top-100 players without a clothing sponsor. His play, carefully constructed to begin with, was also off the mark on the day, increasingly scattered as the evening stretched.

Italian qualifier Thomas Fabbiano made the Indian’s errors count for him.

Early in the match, the world No.85 used his forehand to attack, placing the ball judiciously and opening up the court. He showed no signs of the knee injury he had picked up in the lead-up to Wimbledon.

But, let down by his shot making, Bhambri’s challenge came apart at the seams and he went down 6-2, 3-6, 3-6, 2-6 in 2 hours and 39-minutes to his stocky opponent, who he has now lost to four times in a row. The Indian Davis Cupper had 61 unforced errors (25 of which was on the forehand side) as against his opponent’s count of just 20.

Cheered on by vocal Indian fans on an outside court, Bhambri in his fifth Grand Slam main draw, and looking for his first win in majors, tried to push the pace in the second set and fell behind 1-4. In the first set, the Indian was all over his opponent’s serve, breaking in the third, fifth and seventh games.

In the second set, the Italian throwing more balls back into play, unsettled the Indian, who lapsed into errors. Bhambri, then started holding back a tad, he did well to break back in the seventh game, but the momentum had clearly shifted. The 5 ft 8′ Italian repaid the compliment in the eighth game, breaking on his third opportunity. Fabbiano then levelled set scores.

The Indian, who was broken in the third game of the third set, had a trainer on court in the following changeover, trailing 2-3. Bhambri had pulled out of his first-round clash against heavyweight Canadian Milos Raonic in his last tournament on grass, courtesy a strained right knee, but had used the past week for rest and recovery.

He was perhaps troubled by his knee as the match wore on, often unable to get into position which perhaps was the reason for the number of errors coming off his racket strings.

In the fourth set, Bhambri trailed 0-5, but held after a long-drawn sixth game. The Indian, who came through the qualifiers at the Australian Open, lost to lucky loser Belgian Ruben Bemelmans in his French Open debut, broke with a forehand winner in the seventh game to give the scoreline some respectability.