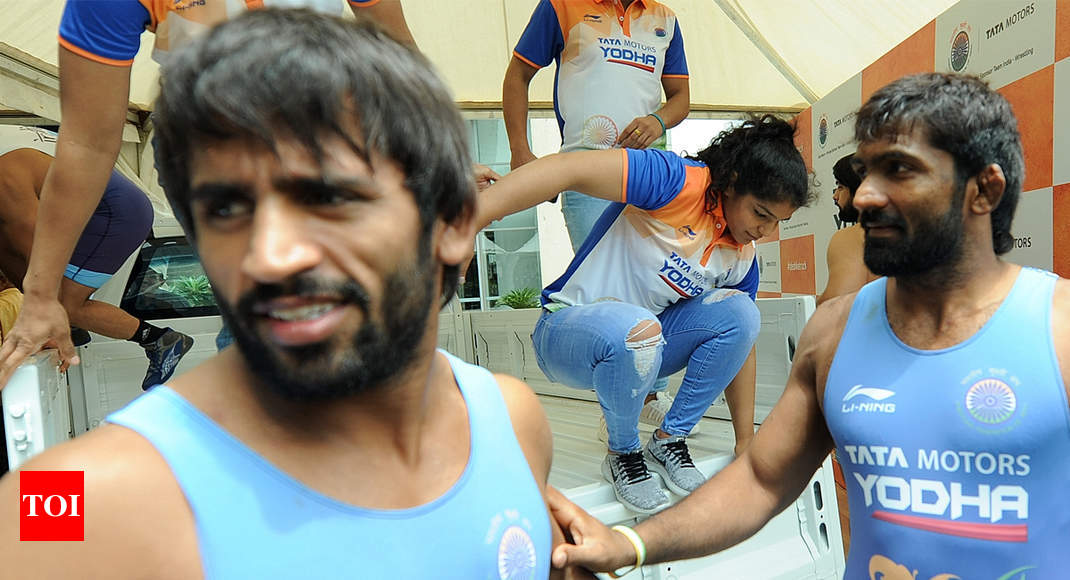 NEW DELHI: Bajrang Punia, the most outstanding Indian wrestler this season with three gold medals, says that he has learnt from his mentor Yogeshwar Dutt that conquering big names is the only way to earn a big name.

Punia is in red-hot form having won a gold medal at the  and followed it up with victories in Tbilisi Grand Prix in Georgia and Yasar Dogu International in Istanbul.

Punia will be India’s best bet for a gold medal at the Asian Games in Jakarta in the men’s freestyle competition.

“Yogeshwar is my role model. He always tells me that ‘you can do it, you are the best’. He will never say that if the opponent is an Olympic champion, you can’t win. He says ‘you have trained well, you are fit, so you can beat anyone. If we beat World Champions, only then the world will acknowledge us and we will make a name’. So, he says beat the bigger guys to make it big. He always keeps morale and motivation level high,” Bajrang said.

“Now that he has retired, he has ample time to work with me. He is sharing all his experience with me and it is helping me. He has competed in four Olympics and he played in same category in which I compete, so this is immensely beneficial for me,” added the 24-year old, who is training in Sonepat, fine-tuning his game ahead of the Jakarta Games.

Bajrang, who won a silver at the Incheon Games, said winning three tournaments this season has prepared him well for the Jakarta Games.

“These tournaments have really been good for me ahead of the Asian Games. It has added to my experience. I know which technique I need to use in what situation. I am really confident going into the Asian Games and will try to implement whatever I have learnt this year. I will give my best,” Bajrang, who will compete in 65kg category, said.

The 2013 World championship bronze medallist said he is well-prepared for Asian Games, having competed in a field which had best grapplers in the world.

“Wrestlers from best Asian countries, except Japan, were there in Georgia. Tajikistan, Uzbekistan, Iran, Korea were there. In Istanbul also, world’s best wrestlers from Russia, Azerbaijan and Turkey were there and every one comes to win the gold medal. It was not easy as it was a ranking tournament.”

He also made it clear that his real target is to excel at 2020 Tokyo Games.

Bajrang said the training stints abroad have played a huge role in him becoming a stronger and fearless wrestler.

“We get good sparring partners when we train abroad. When I was in Istanbul, there were wrestlers from Azerbaijan, Turkey, Belarus and Ukraine and everyday we got to practice with different partners and it does make a difference to your performance,” Bajrang, who also trains with Georgian coach Shako Benitidis, said.

Asked what difference he found in Indian and foreign coaches, Bajarang said, “There’s not much difference but you get personal attention when you are training with personal coaches. After Asian Games, I will again train abroad with Shako.”

Bajrang was there when Sushil Kumar lost his first bout in four years in Georgia, but he backed the celebrated Indian wrestler will bounce back.

“Win and defeat is part and parcel of the game. You can’t perform at high level all the time. I had seen that bout and there were some mistakes but I am sure Sushil bhai will come back stronger in Jakarta.”