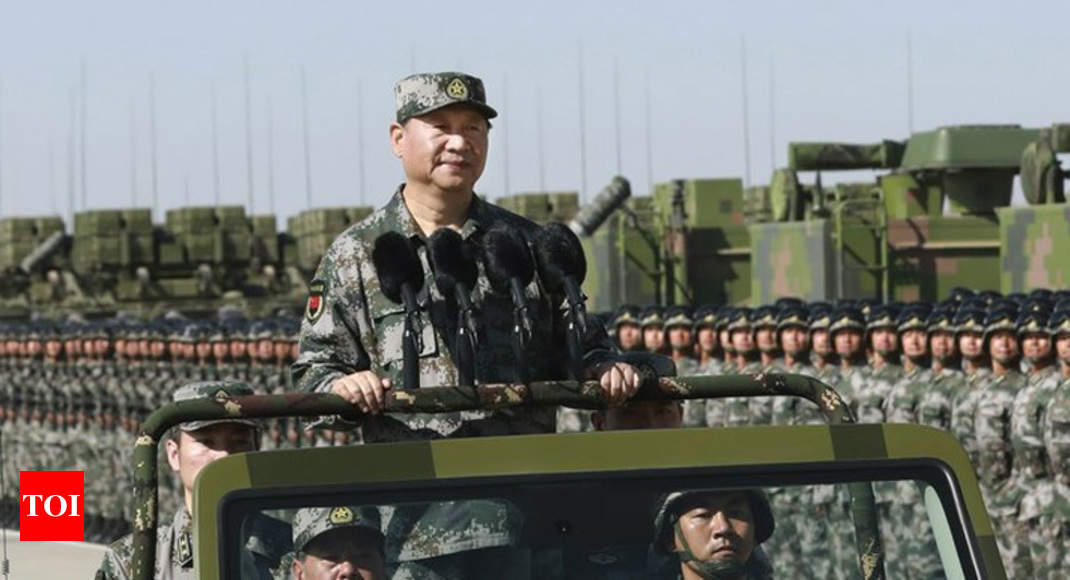 BEIJING: Into his second five-year term and set for a lifelong tenure in power, Chinese President Xi Jinping emphasised on the country’s two-million-strong military to obey the commands of the ruling Communist Party of China headed by him.
Since he took over power in 2012, Xi, who has emerged as the most powerful leader after Mao Zedong heading the party, military and the presidency, has been constantly highlighting that the People’s Liberation Army (PLA) should function under the absolute leadership of the Communist Party China (CPC).

Xi told the top military officials yesterday that their primary task is to uphold the absolute CPC leadership over the armed forces, state-run Global Times reported on Monday.

The political building of the party should be intensified to make sure that the whole military resolutely upholds the authority of the CPC and its centralised, unified leadership, and resolutely obey the command of the party, it said.

The whole military should comprehensively implement the Thought on Socialism with Chinese Characteristics for a New Era, a new theory enunciated by him and the spirit of the 19th once-in-a-five-year Party National Congress held this year.

The party’s thinking on strengthening the military for the new era must be fully implemented, Xi said.

He carried out the biggest shakeup of the military in the last five years through his anti-corruption drive, in which over 50 top generals of the PLA, including two vice chairmen of the Central Military Commission (CMC), which also enabled him to reinforce his leadership firmly over the military.

Xi heads the CMC and he is the only party leader and the civilian in its ranks.

Besides completely restructuring the PLA from top to bottom, Xi had also downsized its strength by shredding three lakh troops.

Six years on into power Xi, who has been re-elected earlier this year for his second tenure by the CPC national congress, has once again called for efforts to comprehensively strengthen the leadership of the party in China’s armed forces to ensure a solid political guarantee for building of a strong military, the official media here reported today.

The PLA is a rare military in the world which functioned, not under the government, but under the command of the CPC since the days of Mao.

Repeated calls by Xi to the military to follow the party has raised speculation that whether he sees any pockets of resistance to his and party leadership.

After the party congress, China’s parliament the National People’s Congress (NPC) has amended the Constitution, removing the two-term limit for the president which was followed by Xi’s predecessors. This enables him to continue in power for life if he chooses to.

He said, since 2012 when he took over the party, he has been working on building the military and keeping hold of it from a political perspective and referred to a conference on the army’s political work held in 2014.

Comprehensive and profound changes regarding the party leadership and party building in the military have taken place, giving a strong political underpinning for the historic achievements and changes in the cause of building a strong military, Xi said, the report said.

Stressing the prominent importance in cultivating cadres and talent, Xi called for efforts in training high-calibre cadres who are loyal to the party, have moral integrity, and demonstrate a keen sense of responsibility, and gathering talent in various areas who are committed to building a strong military and winning combat.

He also called for efforts to improve the party conduct and combat corruption in the armed forces.

“The anti-corruption fight must be carried forward with firmness, and there will be no deviation,” Xi said.