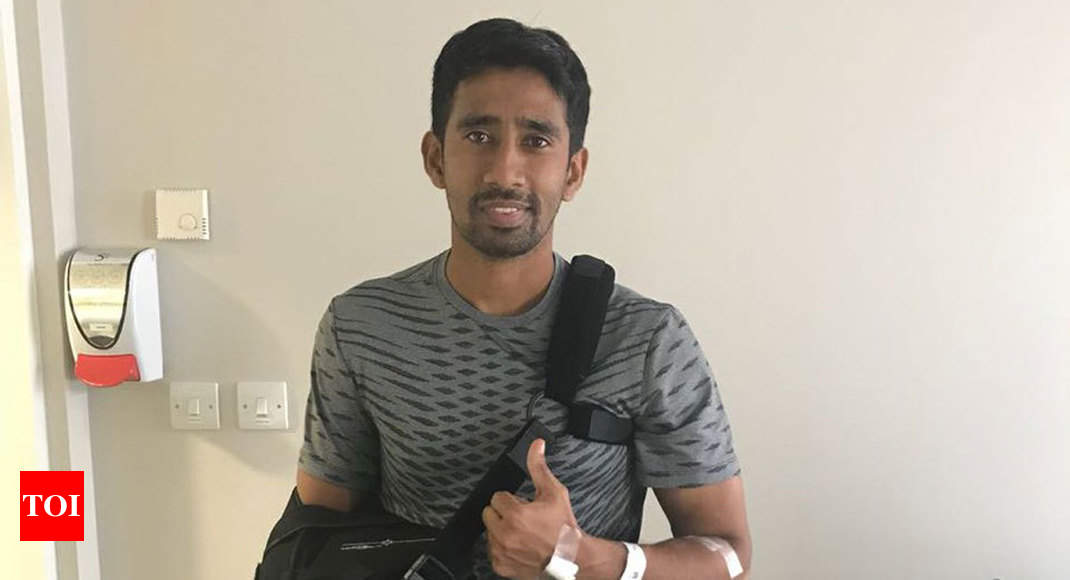 KOLKATA: Eight days after being operated on his right shoulder in Manchester, Wriddhiman Saha returned to the city on Thursday morning. His right arm strapped in a sling from the elbow to fingers, Saha walked out of the airport terminal pushing his trolley bag with his left hand.

“I have to keep it (right arm) this way and cannot change the position for the next three weeks. It will be difficult, but I have to follow doctor’s instruction,” the Indian wicketkeeper-batsman stated.

Surgeon Lennard Frank, who operated on Saha on August 1, reviewed his progress before allowing him to fly home. However, no time has been set for Saha’s possible return to cricket.

The Siliguri boy has to continue doing some basic exercises during the three-week period before visiting the National Cricket Academy (NCA) in Bengaluru where his progress will be assessed by the BCCI physio.

As of now, there is no need for Saha to revisit Dr Frank, and the BCCI physio will recommend the future course of his rehabilitation process.

“I will do as the doctors suggest. There is no point in trying to hurry things as every recovery takes time and I have to accept that,” Saha said, adding that he is not thinking whether he will be able to return to the Indian team for the Australian tour in November.

“The Australia tour is far off. Let’s see how my rehabilitation process goes. I have to accept reality and am not giving any time-frame for my return,” he remarked.

The 33-year-old met his India teammates during the first Test at Edgbaston after the surgery and all of them wished him a speedy recovery.