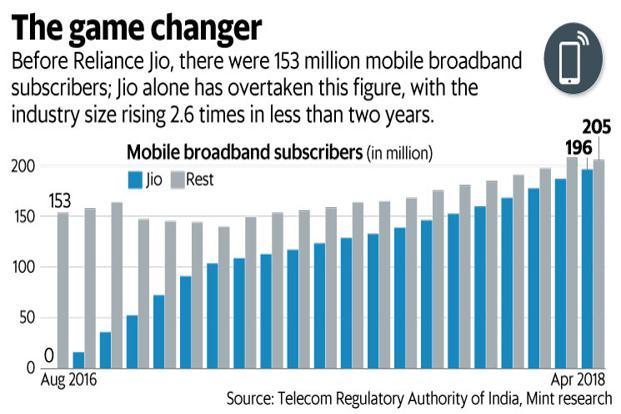 Before Reliance Jio, there were 153 million mobile broadband subscribers. Jio alone has overtaken this figure, with the telecom industry’s size rising 2.6 times in less than two years. Graphic: Mint

Reliance Industries Ltd’s (RIL’s) 41st annual general meeting (AGM) on Thursday was a disappointment as far as its investors were concerned. The company’s shares fell 2.6% at the end of the day’s trading session, far more than the 0.2% drop in the Nifty 50 index. In contrast, the RIL stock had risen 3.6% soon after last year’s AGM, when the company announced the launch of the Reliance Jio Phone.

Yet, RIL’s announcements this year appear to be more wide-ranging. For instance, the company’s chairman Mukesh Ambani said, “Reliance is making a strategic transition to become a technology platform company.” Apart from the mobile connectivity platform, which already has 215 million customers, the company is targeting 50 million home broadband users with JioGigaFiber. Currently, there are only 18 million home broadband connections in the country. RIL’s entry in this segment is expected to be far more disruptive than the feature phone segment it targeted last year with the Reliance Jio Phone.

Then, it is building an e-commerce platform, on the back of the large existing offline retail base. “We are also looking at nationwide platforms in agriculture, education and healthcare. I am confident that our growth in these consumer businesses, based on asset-light platforms of the future, will be non-linear and exponential,” Ambani said at the RIL AGM.

For some reason, investors seemed unmoved. Does this mean they can’t see the big picture? Not quite.

The truth is investors have been pricing in the opportunity from digital services for some time now. Analysts at Jefferies India Pvt. Ltd said in a note to clients that RIL’s current share price implies an enterprise valuation of $50 billion for its telecom business. Bharti Airtel Ltd, with a much larger mobile subscriber base, has an enterprise value of roughly $22 billion for its India wireless business, estimate analysts.

Evidently, investors already have high expectations from RIL’s digital endeavours. As pointed out earlier in the column earlier this year, investors dream of the day customers will talk, shop, bank, read, write, eat, watch digital content and book a holiday using one Reliance digital service or the other. They point to online services firm Tencent, which offers a multitude of services to its customers in China. But platform firms such as Tencent aren’t telecom companies. One of the reasons for their popularity is that they can be used across different networks. As such, it remains to be seen how successful the company can get with its digital services. What’s more, in areas such as e-commerce, companies such as Amazon and Flipkart (now owned by Walmart), have dug their heels deep, and may not cede share in the space easily.

According to an analyst at an institutional brokerage firm, the RIL AGM announcements regarding convergence of offline and online services may well entail more capex, which can drain cash flows more than what was anticipated earlier. This could have dragged the stock down as well, he says.

And finally, investors seemed underwhelmed by the fact that there were no concrete details about the home broadband launch. Last year, for instance, the pricing of the Reliance Jio Phone was announced at the RIL AGM, leading to an expectation that the same would be done for home broadband this time around. But this wasn’t to be.

RIL did say that it is targeting 50 million homes for its new service, which is fairly ambitious, considering that the current industry size is only 18 million. Of course, when Reliance Jio started mobile services, there were only 153 million mobile broadband subscribers, but Reliance Jio alone now has 215 million connections.

In this backdrop, Reliance Jio may well resort to another price war to gain scale in this new segment. Again, this may lead to higher spends than was earlier anticipated, which may have added to some investors’ concerns.