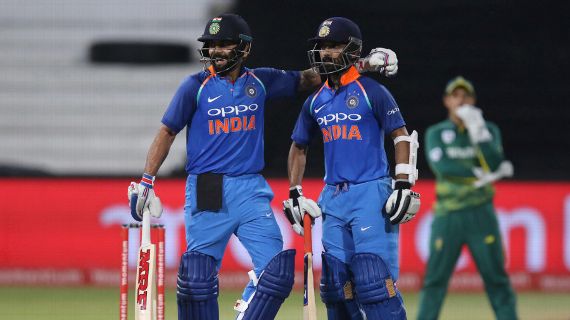 India have been playing delightful limited-overs cricket for a while now. Their top three are as good as any in the world, they have two of the best death bowlers, and now have two joyful wrist spinners too. Before they were stuck in on a damp pitch by Sri Lanka last December in Dharamsala, India had lost just eight of their last 34 ODIs, and nine of their last 21 T20Is. All but five of those defeats were the doing of either a completely flat track that rendered their bowlers ineffective, or a failure of the lower-middle order.

India have addressed that flat-pitch problem to an extent by introducing wrist spinners, but there is, on real flat tracks, a concern that India’s batsmen score too few over 300. On tracks where bowling resembles range-hitting practice, India can take time to realise 375 is the par score. It’s not like they lose every game on flat pitches, but it becomes an even bet in those conditions.

So to be competitive against India at the moment, you need absolutely flat batting conditions, where you can out-hit them. The variation from the norm in modern ODI cricket is not likely to be the seaming track but the one that is slightly slower. Over the last two years, India’s batsmen have adjusted to these slow tracks better than anyone else.

When the ball is coming on, there are few batsmen as good at hitting through the line as David Miller or Quinton de Kock. You look at big hitting and innovative shots, especially the ability to hit from ball one, and there is a fear that India are being left behind by some kind of revolution. However, when it is time to adjust your sights according to the pitch, recalibrate the risks, and get totals you can bowl at, India tend to do it better than others. India’s limited-overs cricket is less formulaic. They like to rely on instinct, and not on premeditation, when they bat.

Individuality blooms in India’s line-up. There is a chaser who aims to finish matches with two overs to go, a finisher who relishes the one-on-one environment of the last over, an opener who scores double-centuries after slow starts, and Hardik Pandya who can hit big from the first ball.

That India are least rigid becomes more apparent when they bowl. The series in South Africa began with the hosts on a 17-match winning streak at home. In those 17 matches, every time they faced 50 overs or were bowled out, they scored 300. They hardly ever came close to tackling slower surfaces or the spin of the quality of India. As South Africa’s batting coach said, you either don’t get much spin in South Africa, or it is mostly the flat, quick, containing type of spinner. He was amazed at how slow Yuzvendra Chahal and Kuldeep Yadav bowl.

It was all going swimmingly for South Africa until Chahal and Kuldeep started to flight the ball real slow and get some turn and drop. Suddenly you had batsmen without a game plan. And in the next ODI, their plan was to attack, which didn’t work. It was obvious they were trying to force themselves to do something without enough time for preparation, as opposed to batting with instinct.

The same happened with the big hitters of Australia when they visited India. Out of five ODIs, Australia won one, the only one in which 300 was scored. In the middle overs, when manoeuvrability is really tested, India’s wickets cost 13 runs more on an average, and they scored at 5.74 an over as compared to Australia’s 5.53. While the strike rate only converts to eight extra runs in those overs, losing fewer wickets left them in a better position to capitalise in the last ten. They scored faster than Australia by taking fewer risks: India faced 114 more balls than Australia did in the middle overs (Australia’s innings in one rain-affected game was truncated), but they faced the same number of dots, with India much more active on the ones and the twos.

The more fluid batting line-up of New Zealand, with Kane Williamson and Tom Latham in the middle overs, adjusted much better against India’s spin in the middle overs than other big-hitting units. That might be the best way to compete against India outside homogenised batting conditions. Be fluid with plans, and have batsmen who are good enough to score at five an over against spin without taking risks. For those looking for flat conditions in Cape Town, where the next ODI will be played, in the domestic one-day cup semi-final there on January 31, a total of 230 was defended successfully, mainly through spin.