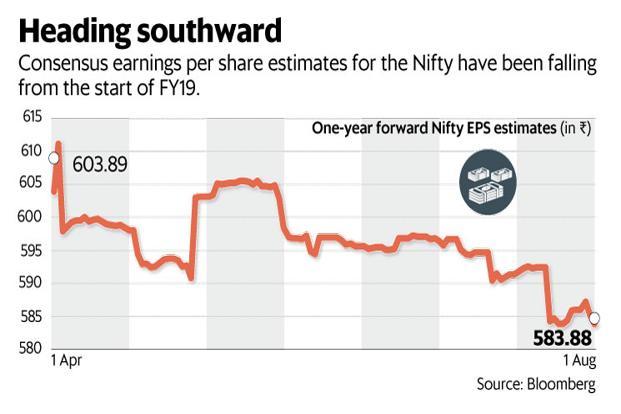 Consensus earnings estimates for the Nifty have fallen since the start of the current fiscal year. Cast your eyes on the chart alongside. In fact at ₹583.88, it is the lowest in FY19. The fall has been a bit more than 3%, not much, but nevertheless, it does go against the narrative of a steadily improving earnings scenario.

Even more interestingly, what happened to the Nifty while its earnings estimates were being revised down? Why, it went up, by about 10%, even after taking into account Thursday’s fall.

There are many reasons for the downward revisions in earnings estimates. Perhaps the most serious one is that the outlook for the monsoon is getting cloudier, which isn’t good news for the Indian equity market.

Latest figures compiled by the India Meteorological Department (IMD) showed that June and July recorded 5% and 6% lower-than- normal rainfall, respectively. While the Met department hasn’t changed its primary forecast of a normal monsoon yet, private weather forecaster Skymet has cut its south-west monsoon forecast for 2018 from “normal” to “below normal”.

Many listed companies, such as agrochemicals and fertilizer producers, derive their revenues from rural areas. Companies in the FMCG (fast-moving consumer goods) and automobile sectors are indirect beneficiaries of improving rural demand.

And one of the factors recently driving investors’ sentiment has been a normal monsoon, translating into a rural consumption-fuelled revival in corporate earnings. Clearly, a sub-normal monsoon does not bode well for India Inc.’s financial performance.

The earnings season so far has been a mixed bag, but management commentaries indicate that rural consumption will continue to outpace urban consumption, say analysts. While companies remain upbeat on the rural demand outlook, passing on input cost pressure remains a challenge, they add. In such a scenario, lower-than-expected rainfall could play spoilsport, resulting in reduction in earnings per share (EPS) estimates for the rest of the fiscal year.

In the event of IMD lowering its monsoon projections too, the key benchmark indices may fall in a knee-jerk reaction. The decline could get steeper if EPS estimates are further revised lower as concerns over a poor monsoon grow, dashing hopes of a swift earnings recovery.