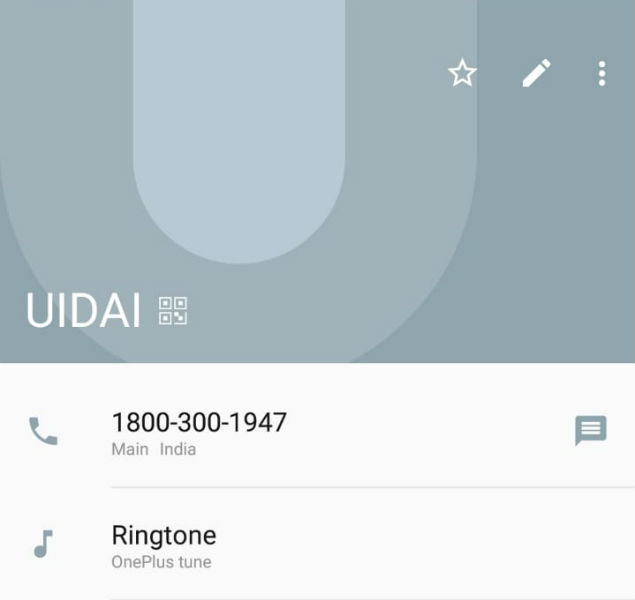 NEW DELHI: The ‘whodunit’ of the mysterious UIDAI helpline number being saved on Android devices by default finally got some closure late Friday night, with Android’s parent, Google, stating it was at their end that the then helpline number — 1800-300-1947 — was coded into devices back in 2014 and has remained there since.

A Google spokesperson said, “Our internal review has revealed that in 2014, the then UIDAI helpline number and the 112 distress helpline number were inadvertently coded into the SetUp wizard of the Android release given to OEMs (Original Equipment Manufacturers) for use in India and has remained there since. Since the numbers get listed on a user’s contact list these get transferred accordingly to the contacts on any new device.

We are sorry for any concern that this might have caused, and would like to assure everyone that this is not a situation of an unauthorised access of their Android devices. Users can manually delete the number from their devices.

We will work towards fixing this in an upcoming release of SetUp wizard which will be made available to OEMs over the next few weeks.”

The internet giant’s statement comes a day after a vigilante hacker — who goes by the pseudonym of Elliot Alderson on Twitter — created a stir on the micro-blogging site on Thursday, after he pointed out that many people have the helpline number saved against the name UIDAI by default in the contact list of their phones.

Earlier on Friday, Unique Identification Authority of India (UIDAI), the body that issues Aadhaar numbers, clarified that it had never asked phone manufacturers or service providers like Airtel, Vodafone and others to add their toll-free helpline in the default list of public service helplines.

Following the UIDAI clarification, telecom lobby group, Cellular Operators Association of India (COAI) too put out a statement saying no service provider had included the number in the phonebooks. “The inclusion of a certain unknown number in the phonebooks of various mobile handsets is not from any telecom service provider,” the lobby group that includes the likes of Bharti Airtel and Vodafone said.

UIDAI went on to clarify that the number is an old one which is not in use and that 1947 is the new helpline. However, some Twitter users were quick to point out that new phones reportedly now have 1947 saved as default.

We could not independently verify these claims.

Some iPhones also have the number saved on them, but that is due to the user at some point in time having migrated their contact list from an Android to iOs, Apple’s operating system.

Minutes ahead of Google’s statement on Friday night, Alderson had put out a tweet speculating about Google’s involvement in the number being pre-loaded.

Post Google’s admission, a little after midnight, the vigilante hacker even claimed to have found the code that the company apparently used to add the UIDAI helpline number as a default in devices’ contact lists.