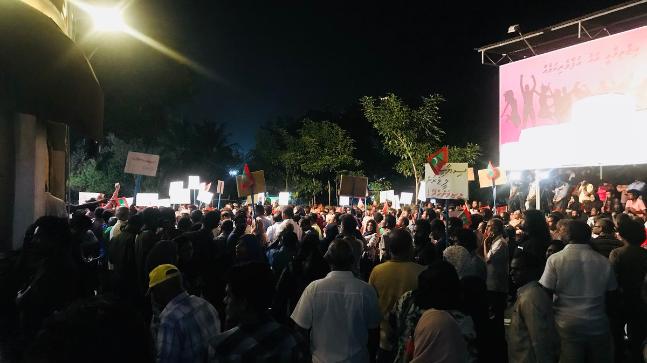 In the last few days, the political crisis in Maldives has worsened with president Abdulla Yameen declaring a state of emergency in the country for 15 days.

The political crisis was triggered after the Supreme Court of Maldives ordered the government to release former president Mohamed Nasheed and eight other opposition leaders, a ruling that President Abdulla Yameen refused to obey.

Anticipating a court order to impeach or arrest President Yameen, the Maldivian army has been asked to resist any such attempt.

India has asked the “Government of Maldives to respect and abide by the order of the apex court” and said it “wishes to see a stable, peaceful and prosperous Maldives”.

Last night, the Ministry of External Affairs advised citizens to “defer all non-essential travels” to Male, the capital of Maldives, and other atolls in the tiny island nation. India said that the “prevailing political developments in Maldives and the resultant law and order situation is a matter of concern”.

As India closely monitors the situation in Maldives, nearly 30 years ago, it was the Indian government which solved the political crisis in the island nation and successfully foiled a coup to overthrow the then Maldives president Maumoon Abdul Gayoom.

WHAT HAPPENED IN NOVEMBER 1988 AND HOW INDIA RESOLVED THE CRISIS IN MALDIVES:

Armed militants of the People’s Liberation Organisation of Tamil Ealam (PLOTE) entered Male, and seized control over major government buildings and television and radio stations.
The armed militants, however, could not capture then Maldives president Maumoon Abdul Gayoom, who kept switching hide-outs and dialled then Prime Minister Rajiv Gandhi for military intervention.
Rajiv Gandhi immediately sent 1,600 troops by air to Male and the successful operation is now known as Operation Cactus which started on the night og November 3, 1988.
The Indian Army paratroopers arrived in Hulhule island within nine hours of the SOS sent by Maldives president.
Within the next few hours, the Indian Army paratroopers rescued Maldives president and secured control of Male, and foiled the coup.
India’s Operation Cactus was lauded by the international community with then US president Ronald Reagan and British Prime Minister Margaret Thatcher praising India’s swift response to the situation.