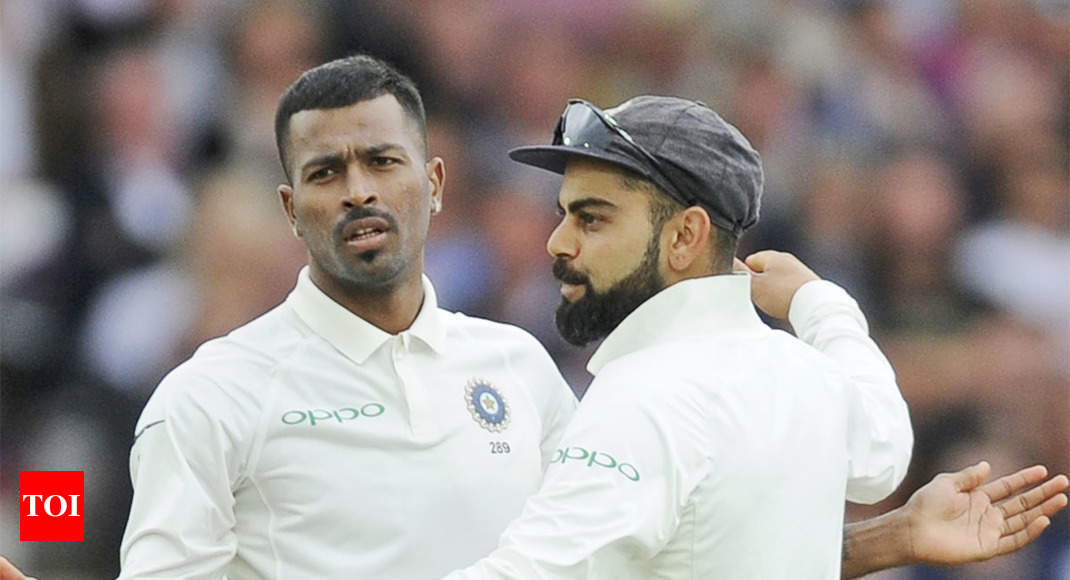 MUMBAI: There are tattoos, diamond ear studs, the swagger, absolute disdain for critics that make Virat Kohli and Hardik Pandya strikingly similar personalities and add to this a loving bond with their respective childhood coaches.

It was Teachers’ Day some years back when Rajkumar Sharma found his doorbell ringing and it was a smiling Vikas Kohli standing at his door.

He requested coach Sharma to come down with him and on the road was a gleaming red Honda City, the keys of which was handed over to the coach.

Vikas then handed over the phone to Sharma and it was his younger brother and Sharma’s favourite student on the line. “Happy Teachers’ Day sir” Kohli wished and Sharma, a father figure to the Indian captain was overwhelmed.

Cut to 2016, it was 21-year-old Hardik had just come back from his maiden tour of Australia, having played three T20 Internationals.

He went to his academy and just took his coach Jitendra Singh, affectionately called Jeetu Bhai to a car showroom to gift him a brand new car.

“Hardik had come to meet me after the Australia tour for which he was selected for the first time in India squad. He straight away took me to a car showroom, where he and Krunal (elder brother) gifted me a car,” Jitendra recollected.

If father’s death and Delhi cricket’s system made his India captain a tough cookie, Hardik and his brother Krunal (recently called for T20s in England) did go through a lot of hardships during their junior days.

The legend has it that there would be days when Hardik and Krunal, would train two sessions a day in intense heat and only a famous brand’s instant noodles for meals.

“They should pay me now that I have made them famous,” Hardik said in jest during a recent web show on youtube.

A naughty Hardik was introduced to cricket on insistence of former India wicket keeper Kiran More, who was then training his elder brother Krunal at his academy.

A restless Hardik would accompany his brother and More decided to channelise his energies into something constructive.

“I am originally from Surat. But since the cricket facility was better in Baroda, I decided to shift with my family as we were then thinking about Krunal’s cricket. Krunal started the training under Kiran More and seven-year-old Hardik used to accompany him at the academy. Kiran Sir (More) asked him to come to his Academy and didn’t even charge my boys any coaching fee,” father Himanshu told PTI today.

But there are two stories about how seeds of a fast bowler was sown. Jeetu bhai and Pandya senior have their own stories.

“He was a leg spinner till the age of 18. However Baroda’s coach at that time was Sanath sir (former Karnataka seamer Sanath Kumar). He once told Hardik to bowl at the nets and he clocked around 130 kmph. Sanath sir told him to bowl another delivery and he was even quicker. Sir then told him to pursue fast bowling,” claimed Himanshu.

“However Jitendra also worked a lot with my son. He would monitor his bowling for hours at the nets.”

However his coach Jeetu bhai recalled a junior level match where he filled in for an absent cricketer.

“Once during an U-19 match, I had only one fast bowler in the side as others were playing for Baroda Ranji and U-23 tournaments. Hardik was a leg-spinner. I asked Hardik to bowl with an aim to get him take the shine off new ball.

“And Hardik took five wickets in an innings. He was more effective than the genuine fast bowler, who was bowling from the other end. Sanath Kumar sir also saw Hardik during the same time and supported his endeavour to bowl quick.”

“In the same season, Hardik was given an opportunity to play for Baroda in T20s, where he performed well and from then he never looked back,” Jitendra said proudly.