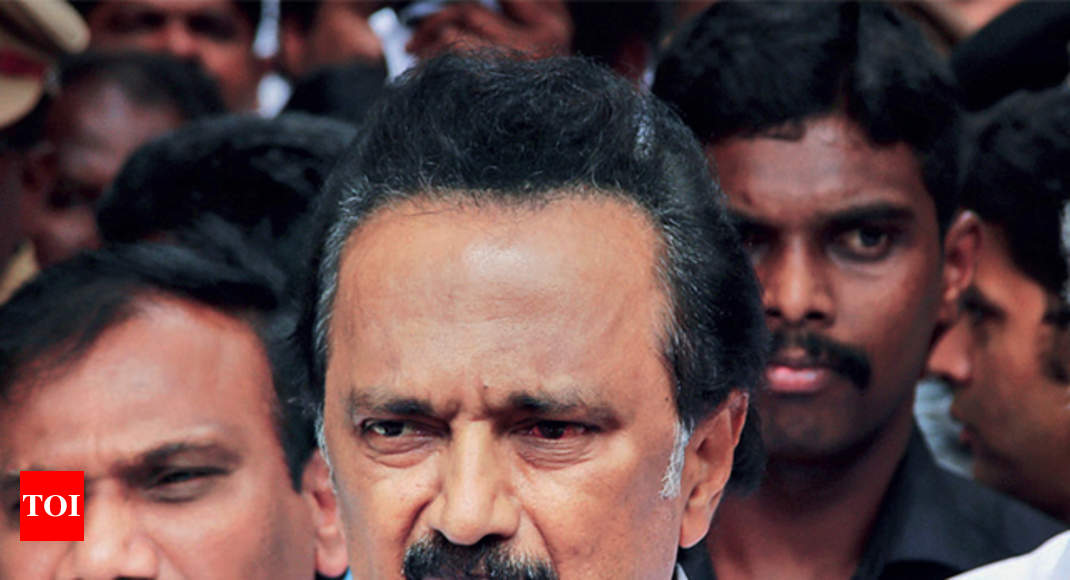 The top leaders of Indian politics rushing to Chennai to pay tributes to M Karunanidhi not only highlighted the towering stature of the departed DMK chief, but also signaled the eagerness of the political class to earn the goodwill of his party and its new chief MK Stalin, expected to emerge as a major player after the next Lok Sabha elections, especially in the context of AIADMK remaining in a state of drift and without a leader of stature.
Tamil Nadu sends the fifth largest contingent of MPs (39) to the Lok Sabha and political circles expect DMK to mop up a significant number of these seats in 2019 and be a decisive factor in the event of a hung Lok Sabha. This has ensured a bevy of political suitors for the Stalin-led DMK.

Though grief-stricken, the DMK leadership did not hesitate to wage a political and legal battle with the AIADMK regime by demanding that Marina Beach be made Karunanidhi’s final resting place. A seasoned Congress brass was prompt to get party chief Rahul Gandhi to tweet in support of the DMK demand. It was meant to appeal to DMK’s ‘emotions’ and demonstrated Congress eagerness to revive its electoral alliance with DMK ahead of 2019 polls. Sonia Gandhi’s description of Karunanidhi as a ‘father figure’ showed the extent to which the Congress high command was ready to go to take care of the DMK sentiment.

In contrast, the BJP leadership was silent on the Marina Beach row. Observers see this as a reflection of the ingrained inability of the BJP — seen in Tamil Nadu as ‘Hindi-speakers party’ — to naturally relate to emotion, which is the engine of Dravidian politics. BJP’s flexibility is also currently limited as the Modi regime aids the crisis-torn AIADMK regime to limp on. DMK’s accusation that the BJP-RSS was behind the AIADMK regime’s opposition to allowing Karunanidhi to be buried at Marina advertised the political divide.

This suits the Congress which is trying to line up an alliance with DMK and Left parties in Tamil Nadu for the LS polls. With Rajinikanth’s political project seen as having the blessings of BJP, the Congress expects Kamal Haasan to be part of its alliance.

However, DMK has the track record, just as AIADMK, to do business with both Congress and BJP, depending on who would assume power at the Centre. Prime Minister Narendra Modi’s high-profile presence among mourners has to be seen in this light.

Rahul Gandhi’s reach out to Stalin was intended to give a generational extension to the Congress-DMK ties that began in the late 1960s and was revived despite the dismissal of two Karunanidhi regimes. However, the ease with which DMK joined a BJP-backed National Front, Congress-backed United Front, the NDA and UPA shows the ideological and political flexibility of DMK to sail withthe wind.