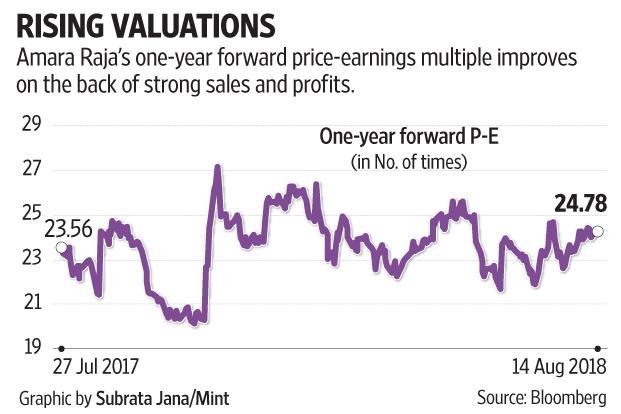 Another major risk to Amara Raja’s earnings is its higher share in the troubled telecom segment, compared to peers.

Amara Raja Batteries Ltd’s June quarter profits were weighed down by two factors—high raw material prices and the weakness in the telecom sector. But lower-than-expected profits did not dampen investor sentiment and the stock has continued to rise.

Perhaps investors are hopeful that softening lead prices will ease the strain seen on profit margins during the June quarter. Lead comprises nearly two-thirds of the cost incurred in making batteries.

Price of lead fell 8% in July when compared to the previous month. And it has further receded in August. Note that June quarter Ebitda (earnings before interest, tax, depreciation and amortization) margin of 12.4% was not only a tad lower than the year-ago period, it also lagged the 14.5% forecast of Bloomberg.

Price of lead, and also that of plastics and sulphuric acid ruled high in the June quarter, dimming profitability. The rupee depreciation added to woes.

Even the strong 19% growth in revenue failed to provide sufficient leverage to offset cost pressures. The 14% Ebitda growth too was significantly lower than what the analysts had penciled in.

But with lead prices coming off, the double-digit growth in revenue brings hope for margin improvement in the near term.

Another reason why investors may be hopeful is that except for the telecom segment, the company’s sales are doing well across segments—automotive, home inverters and industrial including e-rickshaws.

According to Emkay Global Financial Services Ltd, “Our channel checks suggest that Amara Raja would continue to gain market share in two-wheelers and UPS (uninterrupted power supply).” Also, with GST (goods and services tax) implementation under way, it would garner markets from the unorganized sector as well.

This apart, the company’s rich 24 times one-year forward price-to-earnings multiple is driven by consistent increase in market share too. Building from scratch about two decades ago, Amara Raja has a little over a third of the share in four-wheelers and around 15-20% in the two-wheeler segment.

But market leader Exide Industries Ltd is way ahead, with about half the automotive pie for batteries. The drop in its market share several years ago was only due to capacity constraints. Meanwhile, it has already tied up for lithium-ion batteries that would be the way forward as electric vehicles become the norm. Also, according to analysts, the valuation of Exide’s battery business sans its insurance arm is still a little below that of Amara Raja.

Another major risk to Amara Raja’s earnings is its higher share in the troubled telecom segment, compared to peers.

Besides, so far, Amara Raja’s high profit margin was the sweet spot in its performance. This too, is slowly coming off