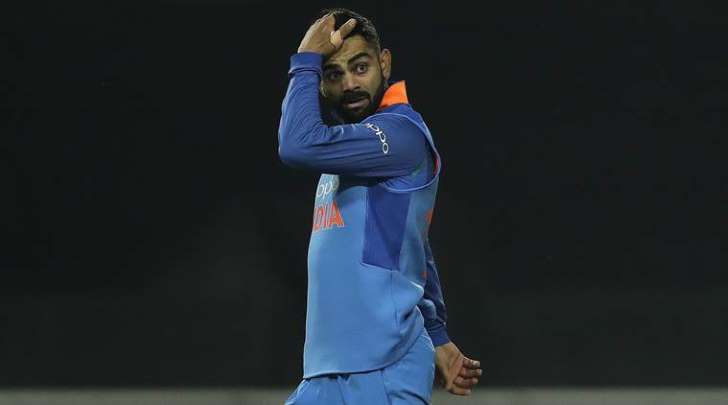 South Africa kept the six-match ODI series against India alive by winning the fourth ODI by 5 wickets (DLS) in Johannesburg on Saturday. In a rain-affected match, South Africa were chasing a revised target of 202 runs from 28 overs which they chased down with 15 balls remaining. Terming the as a “T20”, India captain Virat Kohli said that they did not deserve to win the game as South Africa pulled it through. He was also unhappy with the fact that India could not continue their good batting after the lightning break in the first innings.

“South Africa pulled through, they deserved to win and we did not. The pitch got faster in the evening and the guys didn’t settle in the second half,” Kohli said after the match.

India were cruising at one point when they were 172 for 1 but then lost Kohli and centurion Shikhar Dhawan on either side of the lightning break and then South Africa bowlers came back to restrict India to 289 for 7 in 50 overs. South Africa were in trouble after losing AB de Villiers with team’s score reading 102 but David Miller, Heinrich Klaasen and Adile Phehlukwayo played cameos to take South Africa home.

Kohli said that in the second innings, they had a difference of 35 runs and balls and it was a big one. It was a like T20 game which worked in South Africa’s favour as their batsmen got the freedom to play go after the Indian bowlers.

“The second innings, we got a difference of 35 between runs and balls. It became a T20 game. The game got shorter (after the break) and it worked in their favour, having to go after the bowlers,” Kohli said.

Miller was bowled by Yuzvendra Chahal but replays showed that the leg-spinner had overstepped. The no-ball saved Miller and he later went on to win the game for this team. Kohli was not harsh on his bowlers for the no-balls and also added that the spinners got turn.

“No-balls are fine lines. The boys try to do the best as well. The ball was a bit wet, not too wet, our spinners got a bit of turn, they improvised and it came off,” he said at the post-match presentation.

This was Aiden Markram’s first win as captain of South Africa, which also maintained their perfect record in the Pink ODIs. He also credited the break in the innings which helped stop India’s momentum. He revealed that the message to the batsmen was to not be afraid and express themselves.

“Super relieved to have got over the line today. To be able to pressure on the Indians is a good feeling. A blessing in disguise to have that break to break their momentum. It worked out well, happy to restrict them to 290. The message was to put fear aside and go out and express ourselves. We’re going to keep fighting, still not at our absolute best, but one step at a time,” he said.