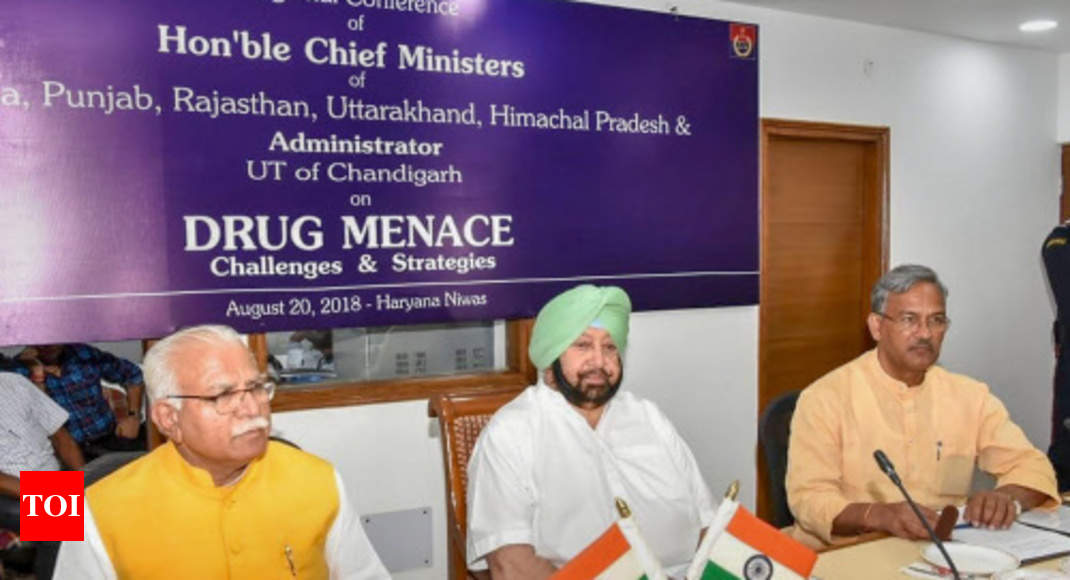 CHANDIGARH: With the drug menace extending its tentacles beyond Punjab in northern India, the four states of Haryana, Punjab, Himachal Pradesh and Uttarakhand along with the Union territory of Chandigarh announced a first-of-its-kind initiative on Monday to wage a joint battle against drugs. Among several measures, the drive will see a common secretariat being set up in Panchkula while the group will formulate a joint strategy to tackle the issue.

“Drugs have no boundaries, hence the need for a joint strategy,” said Singh in a joint presser after the meeting. The drug menace was a big issue in the run-up to the assembly polls and despite the Amarinder Singh government’s claims to have launched a crackdown on drug smugglers by setting up a Special Task Force (STF), the recent spurt in deaths due to suspected overdose hint that the menace has not been dealt with effectively. The fact that Punjab lies on the international drug route compounds its problems.

The Punjab CM, nevertheless, was alluding to the widening spread of the epidemic, with a rise in such cases in Haryana and Himachal forcing the two states to follow Punjab in setting up their own STFs.

At the presser, Khattar said the common secretariat would help states share drug-related data and information, one of the most important components in tackling the menace. The group also resolved to appoint nodal officers to coordinate data related to inflow of drugs and other relevant information. Uttar Pradesh and Jammu & Kashmir are also slated to be roped into the drive at a later stage.

The group will also launch a major awareness campaign in schools, while engaging youth in sports and other activities at village-level. Skill development of youth would also be undertaken on a major scale to prevent the spread of drugs. “We hope to ‘deliver as one’ with the full might of the law in a crusade-like manner to break and demolish the supply chains,” the states and UT said in a joint statement.