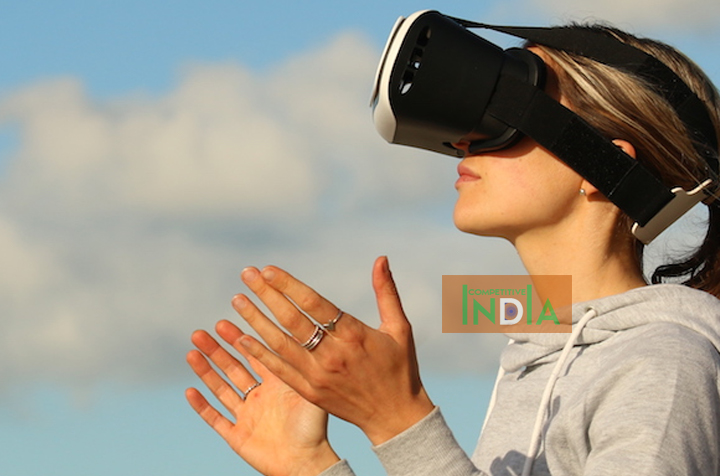 There was so much compelling news in the world of VR and AR this July I couldn’t possibly cover it all with the usual depth and relish to which readers have become accustomed. This is one of those cases where by the time I returned from vacation most of the July recap below wasn’t really news anymore but this news, taken as a group, is a testament to the continued entrepreneurial energy being lavished on immersive tech and illustrates how things come over the transom to me in no particular order. 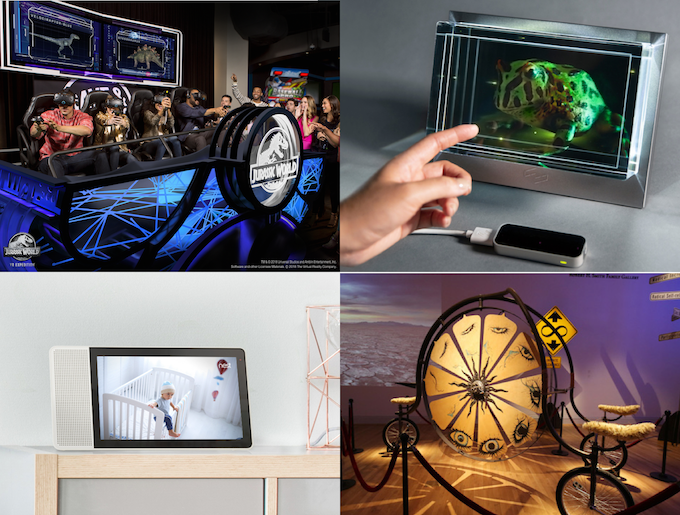 Dave & Busters launched Jurassic World VR motion platform experience at all 111 Dave & Buster’s domestic locations. I spent an hour in Dave & Buster’s in Times Square last Wednesday and went through the simulation twice. It’s terrific. Best 5 minutes of VR $5 will ever buy you. D&B is not terribly crowded, as you would expect, at 9 pm on a weeknight, but there was a crowd of thirty people waiting to board the bonafide theme park quality ride in the midst of the massive arcade. People loved it. Grandmothers and six-year-olds. Loved. It. Screaming their heads off and very, very present in Jurassic World. And they didn’t shoot anything but pictures.

Kudos to Dave & Buster’s for cooking the whole deal up with Universal Studios, The Virtual Reality Company, which did the content, and motion platform integration, and to VRStudios which provided the VRcade Attraction Management Platform.

I spent some time wandering around D&B and to play games after experiencing Jurrasic World, courtesy of a very generous D&B manager. None of these amusements compared to the experience just had. The VRCompany informs me they have already had 0ver 600 thousand patrons. Doing some quick math, that’s a gross of three million dollars and counting. No wonder people are excited about Location Based VR.

Meet Looking Glass – AR on Your Desktop Without Glasses

I had a chance to meet with Looking Glass Factory co-founder and CEO Shawn Frayne who gave me a demo of Looking Glass’ Holographic desktop Display for volumetric content. The device, targeting 3D content creators, is available for pre-order in limited quantities on Kickstarter until August 24th. I usually don’t write about Kickstarter campaigns, having been burned more than once, but in this case, I tried the product and recommend it without hesitation. It’s compatible with 3D creation programs like Maya, Unity, and Blender. 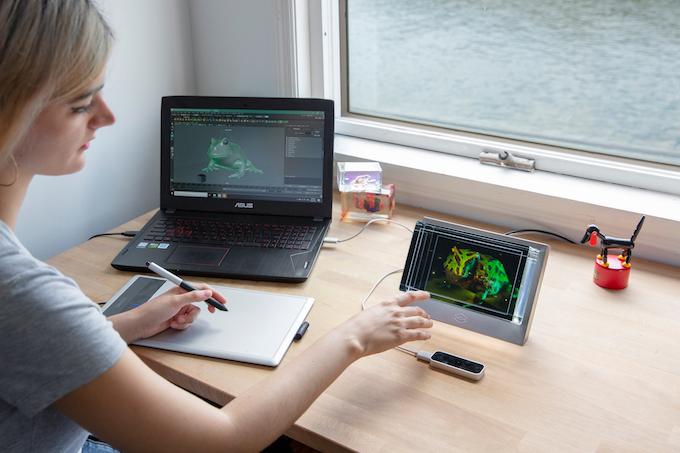 Look ma! No glasses! It’s a real Hologram on my desk. Looking Glass

The AR display allows users to preview 3D objects, characters, and models and show them to clients, coworkers, or audiences without a headset. Most importantly, with its 50-degree field of view, a number of people can view the 3D simultaneously. Frayne told me the image is created with the light field and volumetric display technology which creates 45 views of the object. Coupled with a Leap Motion Controller, the 3D objects displayed can be manipulated with the users’ hands.

Looking Glass passed its Kickstarter goal of $50,000 in a couple of hours. $509,969 has been pledged so far. Models will start shipping in September and continue as inventory is replenished from China through December. After the pre-order window is over, the Standard (8.9 inches) model is $600 and the Large (15.9 inch) goes for $3,000. 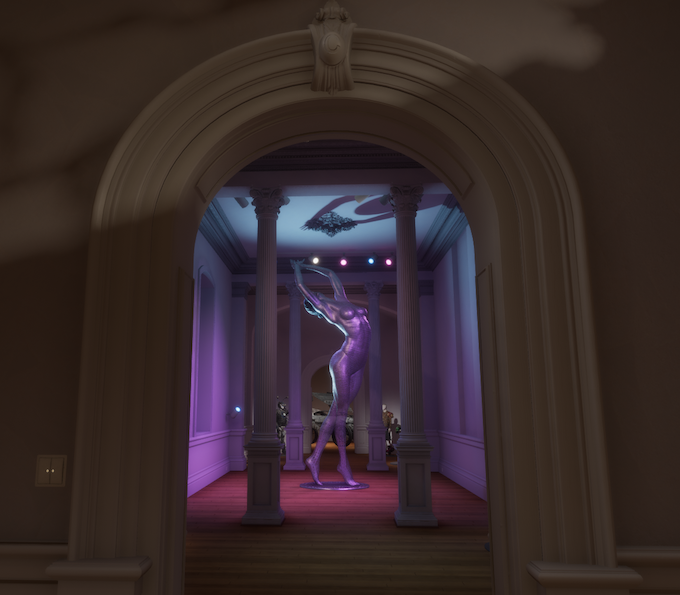 Intel, The Smithsonian and Sansar have teamed up to bring the art of Burning Man into VR.Intel

Jason Gholston and Smithsonian American Art Museum (SAAM) Curator Nora Atkinson met me in a virtual replica in Sansar of SAAM’s Renwick Gallery in Washington, DC, to share their current exhibit, “No Spectators: The Art of Burning Man”.  Unlike the exhibit in IRL this show will never close. Intel provided a valuable assist by processing the photogrammetric capture of the pieces in the exhibit, while massive virtual world Sansar provided the VR platform for the virtual gallery. I would note you can enter Sansar on your laptop. You do not need a VR rig to see this, although that is the best experience.

Burning Man is an annual event in the western United States at Black Rock City – a temporary city erected in the Black Rock Desert of northwest Nevada, approximately 100 miles north-northeast of Reno. I’ve always wanted to go. The exclusive annual event is a veritable nerd Woodstock, where art and technology meet in the desert for exhibitions, events, and community. One of the striking qualities of the exhibition is the scale of the art there. People cavort in colorful costumes around the large-scale art and working conceptual contraptions. In addition, many art pieces are mobile and/or interactive and some even travel around to many of the hundreds of campsites formed by the convergence of thousands of RVs and campers. Tickets to Burning Man are sold by lottery on their website. Many are re-sold on StubHub, Craigslist, and eBay for hundreds of dollars over face value. If you’re inclined to pay a premium, you can still go later this month: Burning Man takes place on the 26th of August through the 4th of September. 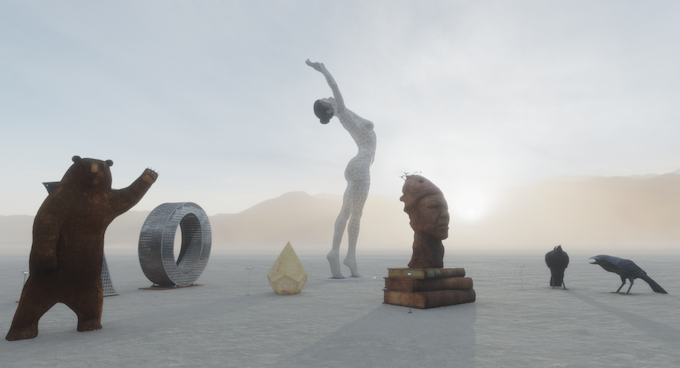 In VR, the art doesn’t have to be trapped in the gallery but can reside instead in its native habitat in the Nevada desert. Intel

With support from Intel and Sansar (which is part of Linden Lab, which created and operates Second Life), SAAM was able to virtually recreate pieces from the exhibition in striking detail, at the realistic scale, heretofore unachievable without being present at Burning Man.

Photogrammetry was used to capture the museum pieces, which include a sixty-foot tall metal statue of a woman, and a fully operational antique bus converted into a cinema. Photogrammetry is a process of capturing spaces and things with thousands of still photos taken from numerous angles. The images are crunched by a program that stitches the photos together into a detailed 3D space or object, which can be edited and enhanced.

Behind-the-scenes videos from the making of this experience, developed by Intel’s in-house creative team, Agency Inside, are available on YouTube: