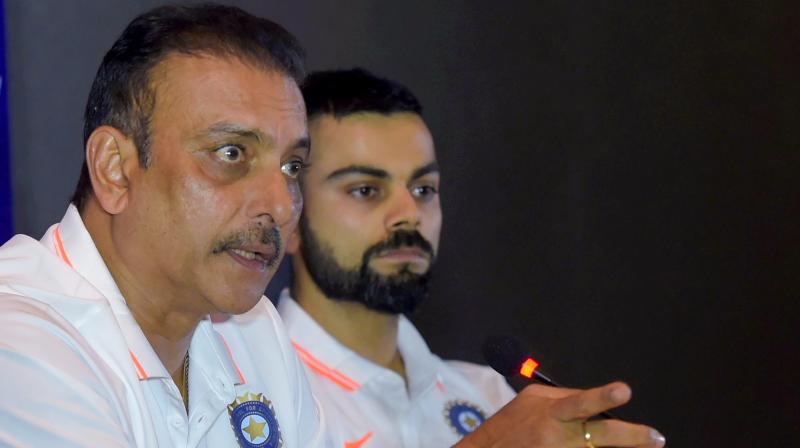 Birmingham: Success in the last four years has driven Virat Kohli to a different level “mentally” and the Indian skipper would like to show the British public in the upcoming Test series why he is eulogized as the best player in the world, says head coach Ravi Shastri.

Coming into the upcoming series, all eyes are on Kohli, who has evolved as one of the finest batsmen in the world in the last four years.

“Look at his (Kohli’s) record. I don’t have to spell out what he has done in the last four years. When you perform in that fashion, you are mentally at a different level as well. You are waiting for whatever test comes your way,” Shastri told Espncricinfo.

Shastri said he believes in playing an aggressive brand of cricket, which is a prerequisite to come out on top in a tough tour, like England.

“Fearless cricket. Trust your instincts. Play your natural game. Results will happen. We will have some fun. We are aggressive. We play to win. Even this series we are playing to win,” he said.

“We are not here to draw games or fill in the numbers. We play every game to win and take the game forward. And if in trying to win we lose a game, tough luck. As long as we win more than we lose, we are happy.”

Having achieved the considerable amount of success in limited overs cricket, Shastri now wants India to become consistent in the red ball format.

He said India has the potential to become one of the best travelers.

“We have done exceptionally well in white-ball cricket. We showed some very good signs in South Africa as far as the red ball is concerned. We want to carry that forward. The challenge for us is to be consistent in the red-ball format overseas,” Shastri said.

“We believe we have the potential to be one of the best traveling teams. At the moment, there is no side in the world that travels properly.You can see what is happening to South Africa in Sri Lanka. We know our scorelines in England before this tour: 4-0 (20110, 3-1 (20140. We want to do much better than that.”

The coach backed out-of-form Cheteshwar Pujara to come good in the series, saying he has an “important role” to play in the side.

“It is not a concern for me at all. He (Pujara) has a role to play. He knows his role because No. 3 is an important role,” Shastri said.

“He’s an extremely experienced player. I feel he is one inning away (from a big score). He needs to spend time at the crease. If he gets one 60-70 under his belt, he will be a different player altogether. My job is to make sure he is thinking in that fashion.

“Pujara is an anchor. He has been one of the pillars of this batting line-up for a long time. You know what he does – he loves batting (smiles). We just want him to do it,” he added.

Outlining KL Rahul’s role in the side, Shastri hinted that India might come with a surprise in the Test series.

“He (Rahul) has been picked as the third opener. But our batting order will always be flexible. The third opener can play anywhere in the top four. We are a very, very flexible outfit. Be prepared for that. We will surprise you guys at times,” he said.

India might be under strength in the bowling department in England because of injuries to Bhuvneshwar Kumar and Jasprit Bumrah but Shastri feels they have the firepower in their arsenal to take 20 wickets in a Test.

“We have a bowling attack that can take 20 wickets. You have to try other people out. If Bumrah and Bhuvneshwar had been fully fit in the one-day series, it would have been a different ball game altogether. We would have both of them fully fit for the entire Test series. It would have given me selection headaches.

“There is still enough experience and variety in our bowling attack – whether it is pace, spin, or Hardik (Pandya) filling in as a fast-medium bowler.”