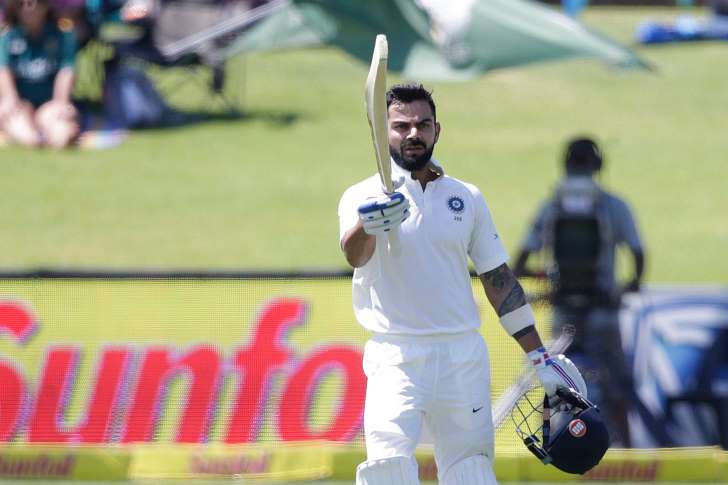 Virat Kohli became the second Indian cricketer after Sachin Tendulkar to hit a Test century as captain in South Africa when he reached the three-figure mark on Day 3 (Monday, January 15) of the ongoing second Test against the Proteas in Centurion.

Tendulkar had scored 169 in Cape Town in 1997 while leading the side in a three-match series, which the visitors lost 2-0. It was also the second of the five centuries the batting legend hit in South Africa during his career.

Meanwhile, Kohli also displaced MS Dhoni from the second spot on the Indian list of top-scorers as captain in South Africa. The Ranchi hero, who stepped down from the longest format of the game in 2014, had hit 90 in Centurion in 2010.

The world no. 3 Test batsman also matched AB de Villiers and David Warner on the list of most centuries in Tests with his 21st ton. He now has 53 international hundreds, 47 lesser than his childhood idol Tendulkar.

Kohli, unlike last year in which he was hitting centuries at will at home, had to work hard for his century on a relatively slow Centurion track. Coming into bat when India were in a spot of bother at 28/2 on Sunday, the Delhi batsman initially counter-attacked before slowing down towards the end of the day.

Despite losing partners at regular intervals, Kohli kept going strong. He stitched a 79-run stand with opener Murali Vijay, who gave the only significant support on the second day before the latter got out to Keshav Maharaj.

Unlike Cape Town, which offered plenty of pace and lateral movement, Kohli was relatively untroubled by the wide ball, which had been used to lure him into getting caught at slips in the past.

The Indian captain drove through the covers and down the ground with ease and kept the scorers busy to unsettle the bowlers’ rhythm.

After losing the first Test in Cape Town last week, India conceded 335 runs in the first innings of the ongoing Test.

Kohli lost Hardik Pandya early on Day 3 after the latter as run-out by Vernon Philander. He has stitched a 50-run stand with all-rounder R Ashwin for the seventh wicket.