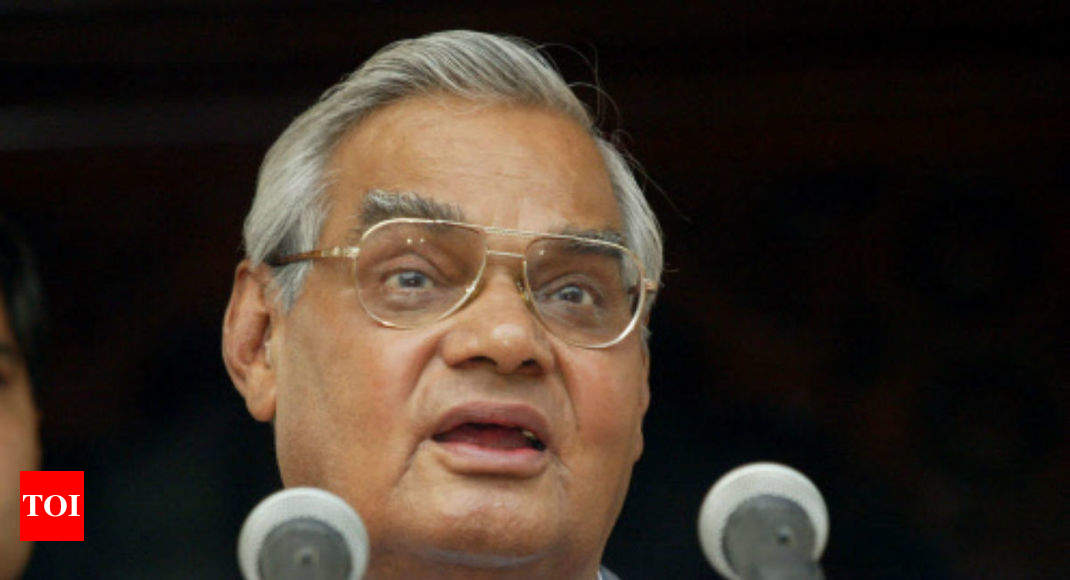 Of India’s 14 PMs, Pt Jawaharlal Nehru belonged to a special universe. Among the rest, Vajpayee is incomparable on two counts: First, for being an ajaatashatru (one with no enemies); second, for his spell-binding oratory. Many leaders who are captivating public speakers have a temptation to use their oratorical skill to gain popularity. Vajpayee, unquestionably the greatest orator in Hindi, was different. His speeches were thoughtful. During debates or at rallies, the audiences were both entertained and provoked to think. Here is my choice of five of his speeches:

Those in the Sangh Parivar who have made vilification of Nehru their pastime would do well to listen to Vajpayee’s heartfelt tribute to him in Parliament a few days after his death on May 27, 1964. “Mother India is in mourning as her beloved Prince has gone to sleep… A dream has remained halffulfilled, a song has become silent, and a flame has vanished into the unknown. The dream was a world free of fear and hunger; the song a great epic resonant with the spirit of the Gita, and as fragrant as a rose; the flame a candle which burnt all night long, showing us the way… The chief actor of the world stage has departed after performing his last act.” Finally, endorsing an ideal dear to Nehru’s heart, he said: If India continued to strive to “establish lasting peace, we shall succeed in paying proper homage to him.”

MAY ’96 | TURNING DEFEAT TO TRIUMPH

For decades after he joined Parliament in 1957, Vajpayee was praised as “the best PM India has never had”. That changed in May 1996, when he became India’s 10th PM, unluckily, only for 13 days. Though BJP was the single largest party in Lok Sabha, it failed to secure enough allies. The speech Vajpayee delivered at the conclusion of the debate on the confidence motion telecast live for the first time on TV became one of the greatest in Parliament’s history. Turning defeat into triumph, he predicted that though he was quitting, he would return to form the government after winning the people’s mandate. The prediction came true in 1998, and again in 1999.

It was characteristic of Vajpayee that there was no trace of triumphalism in the first speech he delivered in Parliament in March 1998, when he returned as the head of the first NDA government. Rather, he used the occasion to drive home the important lesson about the need for all parties to work together to strengthen India’s democracy, promote good governance and ensure people’s welfare. Inaugurating a new era of politics based on “coalition dharma” and consensus between ruling as well as opposition parties, he said: “All of us have to work together to face and overcome the problems and challenges before the nation. This cannot be done by a single party or a single alliance.”

History will remember Vajpayee for his bold decision to make India a nuclear weapons state. His speech in Parliament, after the nuclear tests near Pokhran on May 9 and 11, 1998, was marked by both firmness and restraint. Replying to criticism from Congress, he said he, as the leader of Jana Sangh, had supported Pokhran I conducted by Indira Gandhi in 1974. He explained that Pokhran II was necessitated as India had to be “fully self-reliant in matters of national security”.

He reminded his critics: “Vah purusharth ke prakateekaran ke liye nahin tha (We did not do it to boast our valour).” Rather, “our policy is that our country should have a minimum and credible deterrent so that no external power will ever dare threaten us”. He reiterated the pillars of India’s nuclear doctrine: No first-use, and never use against countries without nuclear weapons.

Vajpayee’s greatest achievement as PM was not Pokhran II; it was his persistent efforts to normalise ties with Pakistan. His bus yatra from Amritsar to Lahore was as audacious as it was imaginative. In Lahore, he made an appeal for Indians and Pakistanis to leave the past behind and embrace a future of friendship and cooperation. He ended reciting his own poem ‘Jang na hone denge…’ (We shall not let another war break out between India and Pakistan). There was thunderous applause. Tears rolled down the cheeks of an elderly Pakistani beside me. Vajpayee had conquered hearts and minds of people across the border, too.