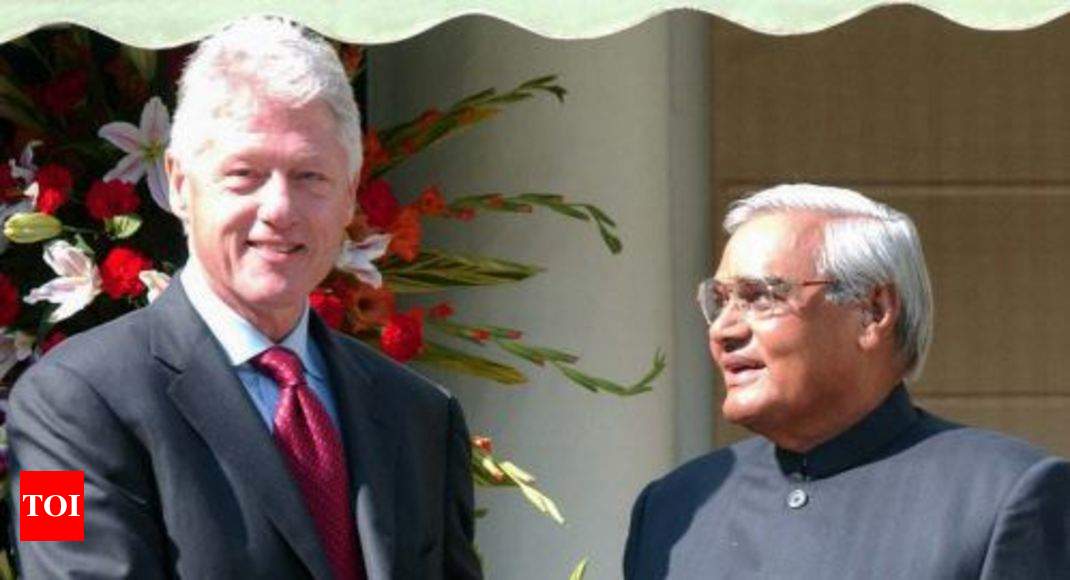 NEW DELHI: Grasping the need to engage with the US and junk cold war premises, Atal Bihari Vajpayee pursued deeper ties with Washington, helped by Pakistan’s adventurism in Kargil and a solid win in the 1999 elections, despite the initial bad blood over the Pokhran-II nuclear tests.

In doing so, the former PM who received a state funeral on Friday, looked to both negotiate from a position of strength by declaring India a de facto nuclear power even at the risk of sanctions, and simultaneously looking beyond fears of loss of economic “sovereignty” and political non-alignment.

Some of the arguments came from Sangh outfits that viewed liberalisation with suspicion and believed America had designs on India. But looking to recast relations with the US and seeing the two countries as “natural allies” was not out of sync with shifts in BJP’s economic thinking that began to embrace globalisation in the mid-90s.

Vajpayee’s views were strongly endorsed and even influenced by his close associate Brajesh Mishra who was also his powerful principal secretary through out Vajpayee’s prime ministership. As it happened, the Pokhran tests led to a more pragmatic understanding of India’s nuclear deterrent and a recognition of the need to engage with a stable regional power moving away from its socialist past.

The recognition of India’s security needs was deepened by Pakistan dictator Gen Pervez Musharraf’s ill-considered military gambit in Kargil. Vajpayee’s restraint in not expanding the conflict beyond the Line of Control and the hard won victories on the ground convinced then US president Bill Clinton to get Pakistan to withdraw.

Clinton gently underlined the US role in his address to the Indian Parliament when he said while India was to settle its disputes bilaterally, America could occasionally, as during the Kargil war, intervene to persuade Pakistan to pull back. But importantly, he emphasised that the LoC had to be respected.

Vajpayee dealing with Pakistan also increasingly zeroed in on its preparedness to deal with terrorism aimed at India. Possibly the fiasco at the 2001 Agra Summit where talks ended in acrimony as Musharraf right away sought to settle Kashmir brought out the limitations of any “peace” initiative. The terrorists-for-hostage swap at Kandahar earlier also drove home some realities.

In the end, Vajpayee insisted on a direct commitment from Pakistan on containing terrorism in his last interaction with Musharraf in January, 2004. His successor Manmohan Singh felt economic interests could foster ties, with limited results. PM Narendra Modi has reverted to a focus on terrorism after initial failed overtures in a furtherance of what Vajpayee finally came around to believe.