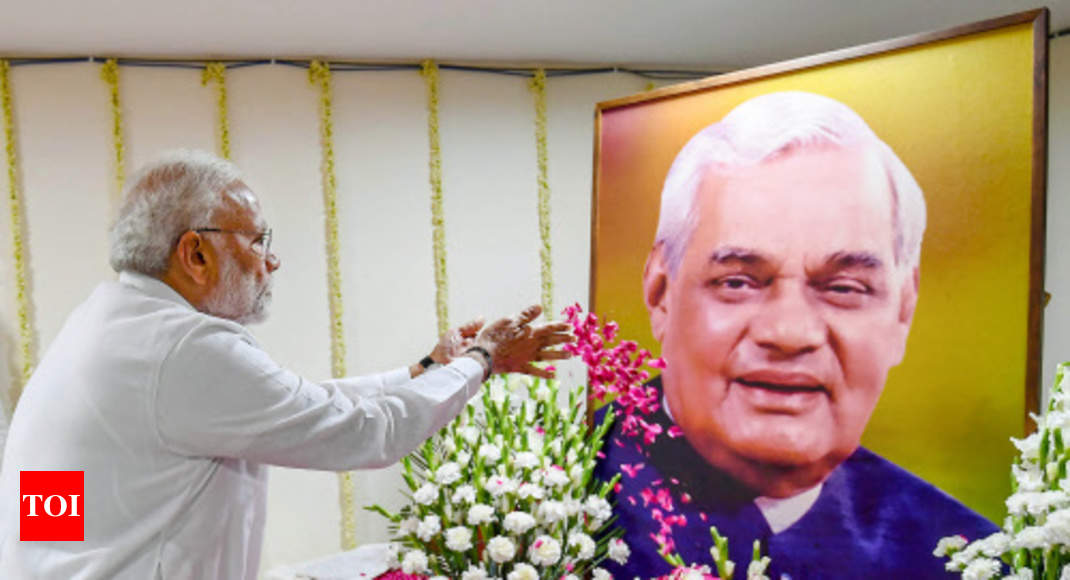 NEW DELHI: Speaking at a prayer meeting for Atal Bihari Vajpayee on Monday, Prime Minister Narendra Modi described the BJP stalwart as a person who neither buckled under pressure nor lost hope despite the odds.

Modi said it was Vajpayee who steadfastly promoted an alternative viewpoint when an ideology had enjoyed monopoly, and it was he who changed the narrative when some countries were cornering India on the Kashmir issue. “Due to Vajpayeeji, terrorism became an important issue on the world stage,” he said.

No party was willing to support Vajpayee when he formed the government for 13 days, Modi said, referring to the short-lived NDA government in 1996. “The government fell. He did not lose hope and remained committed to serving the people,” he told the gathering, adding that Vajpayee showed the way when it came to coalition politics.

Referring to the May 1998 nuclear tests, Modi said Vajpayee’s efforts ensured that India became a nuclear power. He attributed the tests to the brilliance of India’s scientists. Two days later, India tested again and showed what a strong political leadership could do, he said. “He never buckled under pressure. He was ‘Atal’ (steadfast) after all,” he said, adding that the former PM never compromised on his ideology.

RSS chief Mohan Bhagwat emphasised that Vajpayee remained a swayamsevak through his life, a significant remark against the backdrop of the effort in certain quarters to blur the former PM’s RSS roots. “Atal Bihari Vajpayee was an ideal example of sensitivity in the ethics followed by a swayamsevak. He was one leader who managed to respect all despite being in politics. It is not easy to oppose one’s own countrymen, which has to be done in politics but Atalji worked under adverse conditions but never hurt anyone,” he said.

Vajpayee’s partner in politics for 65 years L K Advani said he was very saddened to be speaking when his friend was not around. “Vajpayeeji, who was mentioned all over in my book (his autobiography), was not present for the launch,” he said of the event nine years ago. Advani said he considered himself “fortunate that I have seen him closely for 65 years… have watched films together, have read books together, and have even experienced how good a cook he was”.