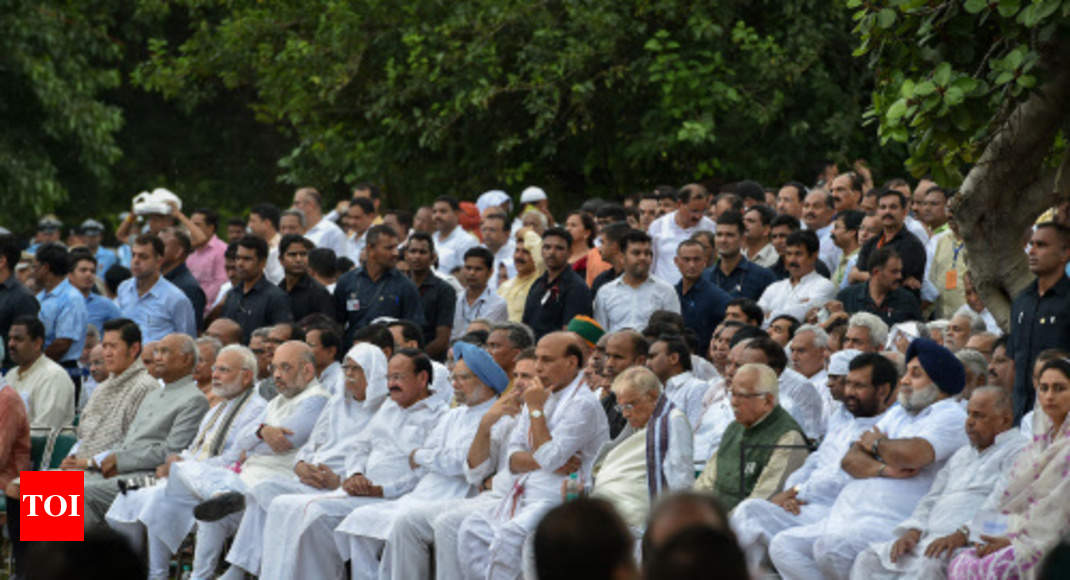 NEW DELHI: Atal Bihari Vajpayee fashioned a viable alternative to the Congress that became larger in time and prevented Indian politics from being dominated by one family with several smaller parties, senior minister Arun Jaitley said in a blog.

Countering the view that Vajpayee reflected a similar set of values as Nehruvian Congress, Jaitley said his political style was liberal and he could communicate even with opponents but he created an ideological alternative that took Congress head on over the past five decades and finally prevailed.

“He was a patient runner. But for him, L K Advani and their other colleagues, Indian democracy would have looked very different — dominated by one family with a lot of scattered smaller parties. That did not happen. Atalji and his colleagues made the difference. The era of which he laid the foundation will prosper even more,” Jaitley said.

It was under Vajpayee and Advani that an isolated BJP, formed after the break-up of the Janata Party in 1980, grew to become the centrestage of Indian politics. “India has now witnessed the demolition of single party domination and BJP has expanded its geographical and social base,” he said.

The minister recalled that Vajpayee was part of a young team led by Deen Dayal Upadhyaya that worked to build BJP’s predecessor Bharatiya Jana Sangh. “Disillusionment with Congress started after the 1962 China debacle… It bore results in 1967 when BJS emerged with a large contingent of MPs and a sizeable presence in Uttar Pradesh, Bihar, Madhya Pradesh, Rajasthan and Punjab,” he said.

After Upadhyaya’s death, the mantle of leadership fell on Vajpayee who became the nationally accepted face of Jana Sangh. He could coordinate with other political parties without compromising on the Sangh’s core beliefs.

Speaking of his experience of being a member of the Vajpayee cabinet, Jaitley said the leader was never harsh with ministers or officials. He allowed discussion and eventually reconciled conflicting viewpoints.