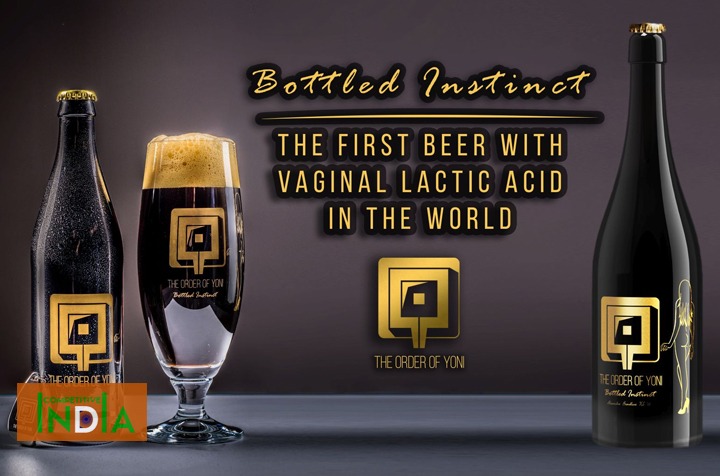 A Polish beer made from the ‘vaginal lactic acid of hot underwear models’ has gone on sale.

The odd tipple has been launched by a Warsaw brewery named ‘The Order of Yoni’. ‘Yoni’ is the Sanskrit word for vagina.

Customers can now buy the beer and taste the ‘essence’ of the models at various pubs after it premiered on July 28 in the Polish city of Katowice.

The brewery’s website tells potential customers: ‘Imagine the woman of your dreams, your object of desire. Her charm, her sensuality, her passion. Now you can try how she tastes, feel her smell, hear her voice.

‘Now imagine her giving you a passionate message and gently whispering anything you’d like to hear.

‘Now free your fantasies and imagine all of that can be encompassed in a bottle of beer.’

However, one of the first customers who tasted the beer, Grzegorz Majewski, was not impressed, complaining that at 25 zloty (£5), the beer costs the same as a normal bottle of wine.

He said: ‘People will try it out of curiosity, but I don’t think it will be a regular addition to the table for beer lovers.’

A promotional video shows a large brown bottle with a sticker being peeled back. It shows a model in underwear with her name, Pauline, written nearby.

The label says: ‘You are drinking the essence of Pauline’.

The founder of the company, Wojtek Mann, described the process by which a gynecologist took smears from their two ‘hot’ models, Paulina and Monika, and had the lactic acid bacteria isolated in a lab.

The website describes the process ambiguously, explaining: ‘The secret of the beer lies in her vagina. Using hi-tech microbiological techniques, we isolate, examine and prepare lactic acid bacteria from the vagina of a unique woman.’

Amidst concerns about the hygiene implications of the beer, the Order of Yoni reassured consumers that the ladies had been totally checked before having the smears and that the scientific process they use to isolate the bacteria removes all potentially unsavory elements.

However, the determined entrepreneur managed to raise the funds through a single investor and finally made his vagina beer dream a reality.

He said: ‘We managed to find an investor who believed in this project and supported us financially.’