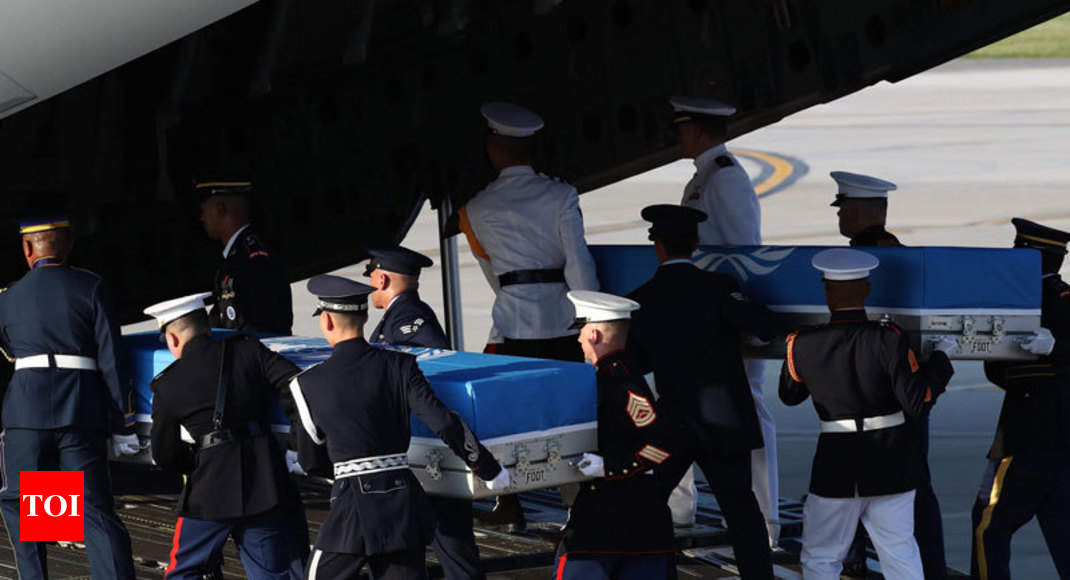 PYEONGTAEK (SOUTH KOREA): Decades after the end of the Korean War in 1953, the remains of dozens of presumed US war dead began their journey home following a repatriation ceremony in South Korea on Wednesday.

North Korea handed over the remains in 55 boxes last week and allowed a US military transport plane to move them to the US Osan Air Base near Seoul in South Korea. While it was an apparent goodwill gesture by North Korea toward the United States, the return comes amid growing skepticism about whether the North will follow through on its pledge of nuclear disarmament.

Hundreds of US and South Korean troops gathered at a hanger at the Osan base for the repatriation ceremony, which included a silent tribute, a rifle salute and the playing of the US and South Korean national anthems and dirges in front of the UN flag-covered metal cases containing the remains.

“For the warrior, this is a cherished duty, a commitment made to one another before going into battle, and passed on from one generation of warriors to the next,” Vincent Brooks, chief of the US military in South Korea, said in a speech. “This is a solemn reminder that our work is not complete until all have been accounted for, no matter how long it takes to do so.”

The remains were then moved in gray vans to an airfield where US and South Korean soldiers loaded them one by one into two transport planes. Four US fighter jets flew low in a tribute.

Later Wednesday, the transport planes left for Hawaii, where the remains will undergo an in-depth forensic analysis, in some cases using mitochondrial DNA profiles, at a Defense Department laboratory to establish identifications. US Defense Secretary Jim Mattis said last week that the return of the 55 boxes was a positive step but not a guarantee that the bones are American.

A US defense official said Tuesday that it probably will take months if not years to fully determine individual identities from the remains. The official, who discussed previously undisclosed aspects of the remains issue on condition of anonymity, also said North Korea provided a single military dog tag along with the remains. The official did not know details about the single dog tag, including the name on it or whether it was even that of an American military member.

Vice President Mike Pence, the son of a Korean War veteran, is to fly to Hawaii for what the military calls an “honorable carry ceremony” marking the arrival of the remains on American soil.

The repatriation is a breakthrough in a long-stalled US effort to obtain war remains from North Korea. About 7,700 US soldiers are listed as missing from the 1950-53 Korean War, and 5,300 of the remains are believed to still be in North Korea.

“The remains received from North Korea are being handled with the utmost care and respect by professional historians, forensic scientists, uniformed personnel and government officials,” the US-led UN Command said in a statement. It said it “never leaves troops behind, living or deceased, and will continue the mission of repatriation until every service member returns home.”

The bones’ return was part of an agreement reached during a June summit between U.S. President Donald Trump and North Korean leader Kim Jong Un. Trump thanked Kim for the return.

During the summit, Kim also agreed to “work toward complete denuclearization of the Korean Peninsula” in return for Trump’s promise of security guarantees. Trump later suspended annual military drills with South Korea which North Korea had long called an invasion rehearsal.

But Trump now faces criticism at home and elsewhere that North Korea hasn’t taken any serious steps toward disarmament and may be trying to buy time to weaken international sanctions against it.

North Korea halted nuclear and missile tests, shut down its nuclear testing site and began dismantling facilities at its rocket launch site. But many experts say those are neither irrevocable nor serious steps that could show the country is sincere about denuclearization.

The Washington Post reported Monday that US intelligence agencies have obtained evidence indicating that North Korea is continuing to build long-range missiles. It cited anonymous officials “familiar with the intelligence” as saying that work on at least one and possibly two intercontinental ballistic missiles was underway.

North Korea may want to use the remains’ return to keep diplomacy with the United States alive and win a reciprocal US concession. Experts say the North likely wants a declaration of the end of the Korean War as part of US security assurances.

An armistice that ended the Korean War has yet to be replaced with a peace treaty, leaving the peninsula in a technical state of war. North Korea has steadfastly argued its nuclear weapons are meant to neutralize alleged US plans to attack it. The signing of a peace treaty could allow the North to demand the pullout of the 28,500 American troops stationed in South Korea. The US military presence in South Korea is the backbone of its security commitment to South Korea, which doesn’t’ have nuclear weapons.

Efforts to recover remains in North Korea have been fraught with political and other obstacles since the war’s end. Between 1990 and 1994, North Korea unilaterally handed over 208 caskets to the US, which turned out to contain remains of far more than 208 individuals, although forensics specialists thus far have established 181 identities. In addition, a series of US-North Korean recovery efforts, termed “joint field activities,” between 1996 and 2005 yielded 229 caskets of remains, of which 153 have been identified, according to the Pentagon.

The recovery efforts stalled for more than a decade because of a standoff over North Korea’s nuclear ambitions and a previous US claim that security arrangements for its personnel working in the North were insufficient. The Trump administration, as part of the Singapore agreement, is pursuing discussions with North Korea on resuming those “field activities.”