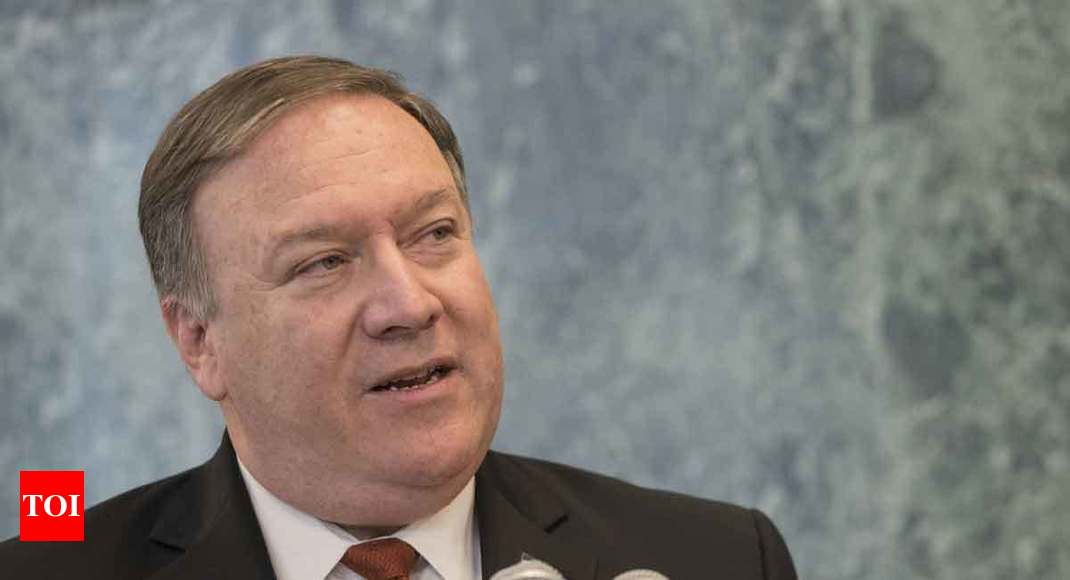 UNITED NATIONS: The United States on Friday welcomed the UN Security Council’s united support for the fully verified denuclearization of North Korea and pressed China and Russia to strictly enforce UN sanctions to get Pyongyang to give up its nuclear weapons.

US Secretary of State Mike Pompeo accused North Korea of violating an array of tough sanctions imposed by the council. He warned that “when sanctions are not enforced, the prospects for the successful denuclearization of North Korea are diminished.”

Nonetheless, Pompeo told reporters after meeting behind closed doors with the 15 council members that President Donald Trump “remains upbeat about the prospects for denuclearization” following his historic summit in Singapore with North Korean leader Kim Jong Un. “So do I, as progress is happening,” he added without elaborating.

The Trump administration hopes that one day North Korea will be at the United Nations “not as a pariah but as a friend,” Pompeo said. But “it will take full enforcement of sanctions for us to get there” as well as Kim following through “on his personal commitments” to Trump.

At the summit, Trump and Kim agreed to work toward denuclearization of the Korean Peninsula, without describing when and how it would occur.

Follow-up talks this month between Pompeo and North Korean senior officials in Pyongyang had a rocky start, with North Korea accusing the United States of making “unilateral and gangster-like” demands.

Pompeo stressed Friday that the 15 Security Council nations “are united on the need for final, fully verified denuclearization of North Korea.”

Pyongyang for decades has been pushing a concept of “denuclearization” that bears no resemblance to the American definition, vowing to pursue nuclear development unless Washington removes its 28,500 troops from South Korea and the nuclear umbrella defending South Korea and Japan.

China, which is North Korea’s closest ally and responsible for more than 90 percent of the isolated country’s trade, backs North Korea’s call for a “phased and synchronous” approach to denuclearization.

Last month, Beijing suggested the Security Council consider suspending or lifting sanctions on North Korea if it is in compliance with UN resolutions and making progress in negotiations. Russia said Friday it also backs this approach.

Russia’s deputy UN ambassador, Dmitry Polyansky, said that Pompeo confirmed the US “will seek the full denuclearization” of North Korea.

“It is necessary that the denuclearization go step by step with parallel actions by the international community,” Polyansky said. “We are talking about easing sanctions pressure through the UN Security Council, as well as the removal of unilateral US sanctions.”

Some exemptions have already taken place.

This week, South Korea received exemptions from the Security Council committee monitoring North Korea sanctions for communications lines between the North and South and for some goods for the North including furniture, transport vehicles and a bus.

The US has pushed for rapid moves toward ridding North Korea of its nuclear weapons and says sanctions will remain until Pyongyang follows through on Kim’s pledge. But Trump has recently been playing down expectations of quick results, saying this week there was “no time limit” on getting North Korea to denuclearize.

“We continue to reiterate we can’t do one thing until we see North Korea respond to their promise to denuclearize,” Haley said. “We have to see some sort of action. And so until that action happens, the Security Council is going to hold tight.”

As for the broader international community, she said, “we ask you to hold tight as we go forward.”

Pompeo said “the scope and scale” of denuclearization “is agreed to” and “the North Koreans understand what that means,” though he didn’t elaborate and sidestepped a question on what the first step should be.

“We need to see chairman Kim do what he promised the world he would do,” Pompeo said.

Chinese Ambassador Ma Zhaoxu said that “China is committed to denuclearization” and “to peace and stability on the Peninsula.” He added that China will “fully implement” UN sanctions resolutions, adding that “everyone” else should as well.

But, Pompeo said, North Korea is “illegally smuggling” in refined petroleum products beyond the quota of 500,000 barrels per year allowed under UN sanctions, mainly by ship-to-ship transfers.

US documents sent to the committee and obtained by The Associated Press cite 89 instances between Jan. 1 and May 30 in which North Korean tankers likely delivered refined products “illicitly procured” via such transfers.

The US says Russia and China both informed the sanctions committee that they were supplying refined products to North Korea.

Pompeo said North Korea is also evading sanctions by smuggling coal by sea and across borders, through cyber thefts and other criminal activities, and by keeping workers in some countries that he didn’t name.

These actions are all “generating significant revenues for the regime and they must be stopped,” he said.

Haley criticized “some friends who want to go around the rules,” and especially Russia and China for blocking the sanctions committee from demanding that all countries halt shipments of petroleum products to North Korea immediately.

Moscow and Beijing said they need additional time to investigate the US allegations and put a six-month “hold” on the US request.

“Are they telling us that they want to continue supplying this oil?” Haley asked. “They claim they need more information. We don’t need any more information. The sanctions committee has what it needs. We all know it’s going forward.”

Dutch Ambassador Karel Van Oosterom said the Security Council made clear to Pompeo that it wants to see “concrete actions and deeds” from North Korea to denuclearize.

Van Oosterom, who chairs the North Korea sanctions committee, told reporters: “I think for all of us it’s clear that the progress is in the talks so far, that the engagement is there and the discussions are taking place.”

South Korean Foreign Minister Kang Kyung-wha said North Korea made “a clear commitment on complete denuclearization repeatedly and, of course, very forcefully at the Singapore summit with President Trump, and we will hold them up to that commitment.”