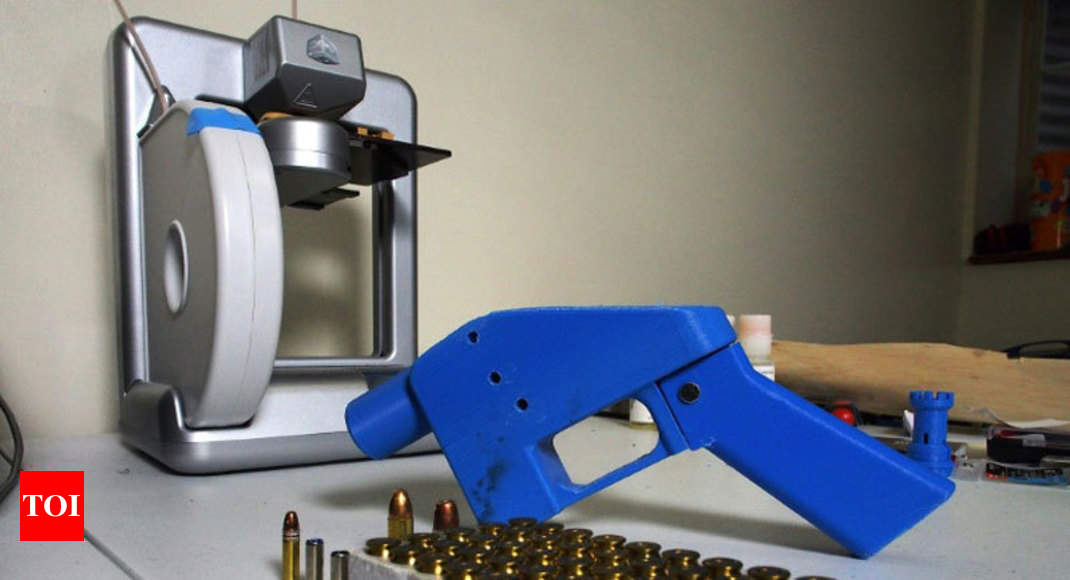 CHICAGO: A US judge has temporarily blocked the online publication of blueprints for 3D-printed firearms, in a last-ditch effort to stop a settlement President Donald Trump ‘s administration had reached with the company releasing the digital documents.

Eight states and the district of Columbia, which houses the capital Washington, had filed a lawsuit against the federal government, calling its settlement with Texas-based Defense Distributed “arbitrary and capricious.” The Trump administration had settled a five-year legal fight by permitting the company to publish its website Defcad – which founder Cody Wilson envisioned as a WikiLeaks for homemade firearms called “ghost guns.” Those weapons can be manufactured using 3D printers or personal steel mills, and lack traceable serial numbers. At least one of the guns can also be made from plastic, which is virtually invisible to metal detectors.

US district Judge Robert Lasnik in Seattle, Washington granted the plaintiffs’ motion for a temporary restraining order blocking the release of the digital plans, and scheduled a hearing for August 10.

In a written statement, New York Attorney General Barbara Underwood, one of plaintiffs, called the ruling “a major victory for common sense and public safety.” “As we argued in the suit we filed yesterday, it is – simply – crazy to give criminals the tools to build untraceable, undetectable 3D printed guns at the touch of a button.

Yet that’s exactly what the Trump administration decided to allow.” As uproar mounted yesterday, the White House expressed skepticism over the legality of Wilson’s efforts, even though the administration had green-lighted the project.

Trump weighed in on Twitter, revealing that he had spoken to America’s main pro-gun lobby, the National Rifle Association, about the topic.

“I am looking into 3-D Plastic Guns being sold to the public,” the president said.

“Already spoke to NRA, doesn’t seem to make much sense!” White House spokesman Hogan Gidley expanded on the president’s comments last night, telling reporters: “It is currently illegal to own or make a wholly plastic gun of any kind — including those made on a 3D printer.

Wilson remained defiant and vowed to fight in court. He told Wired magazine that he is facing legal action from “at least 21 state attorneys general” who have cited a risk to public safety.

“I intend to litigate,” he told the magazine. “Americans have the unquestionable right to share this information.” The self-proclaimed “crypto-anarchist” also made the digital blueprints available online earlier than the today launch date he had previously announced.

AFP was able to download two files from the website yesterday, though it had some technical glitches and was difficult to access. The site had 10 firearms and weapons components with downloadable digital files.

Wilson, a law school dropout who has taken up the cause of allowing unfettered information online without government interference, contends that the US Constitution’s Second Amendment, which guarantees the right to bear arms, should extend to a person’s right to make their own guns.

His legal team has argued that any move to prevent the distribution of the blueprints would run counter to the “foundational principles of free speech.” But federal courts have disagreed. Before the settlement with the Trump administration, Wilson had lost in both district and appellate court. The US Supreme Court had declined to take up his case.

Politicians, gun control advocates and law enforcement had expressed concerns that Defcad’s files would allow anyone – from a teen to a convicted felon – to make dangerous weapons.

But while Wilson has somehow become the public face of homemade weapons technology, the phenomenon of “ghost guns” is bigger than his website alone.

Earlier in July, Los Angeles police showcased an arsenal of such weapons seized from gang members during a six-month undercover operation.

The firearms, including AR-15-style semiautomatic rifles, were fashioned from kits purchased online, according to police. Wilson’s website also features blueprints for the AR-15.

Over the last five years, Wilson’s Defense Distributed has grown to 15 employees inside a non-descript warehouse in the Texas state capital Austin.

They have created a plastic 3D-printable handgun called the “Liberator,” a machine called the “Ghost Gunner” with which homemade metal gun parts can be constructed, and amassed other digital gun files.

Jonathan Lowy of the Brady Center to Prevent Gun Violence told AFP that if Wilson’s website is ultimately allowed to publish, the consequences could be even greater outside of the US.

“It’s certainly a huge international problem, particularly given that many other countries have much stronger gun laws than in America,” Lowy said.

“So, in those countries, there are many people who shouldn’t have guns and could not get them unless they can get their hands on a 3D-printed gun.”