MUMBAI: There are over Rs 3 lakh crore worth of undeclared non-performing assets in the books of  as of March 2018. These are by borrowers who have defaulted to one lender but theloa ns are not classified as NPAs possibly because the other banks are not aware of defaulter’s financial position.

An analysis by TransUnion Cibil, which has thrown up this data, also revealed that the undeclared NPAs are in public sector banks (PSBs) that are not facing restrictions under prompt corrective action (PCA), and in private banks. TU Cibil has shared the data with the RBI and expects that banks will declare another round of bad loan provisions in the quarter ending September 2018. RBI norms require lenders to start NPA proceedings under the cross-default clause even if the delinquency is in respect of another loan. 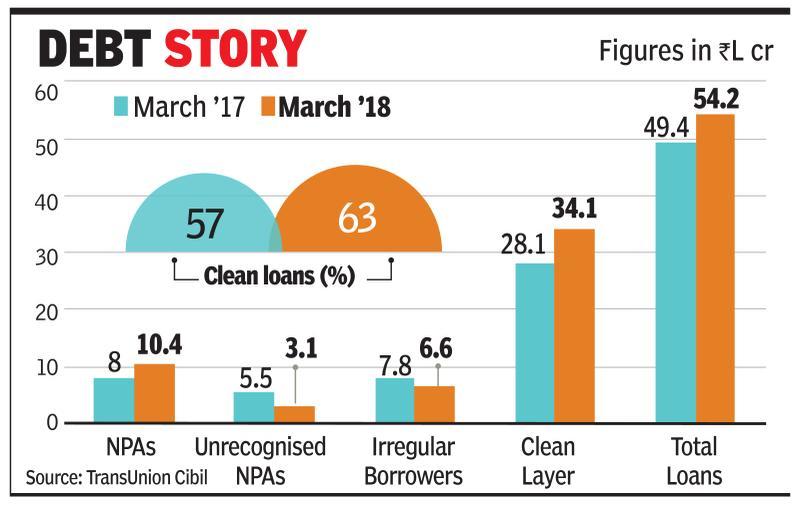 Unlike other research reports, which are based on samples, TU Cibil gets information on every transaction, and its findings are facts rather than opinion. “We are in a position to come up with this information as we have the data which enables us to provide a ‘one bank’ view,” said Satish Pillai, MD & CEO, TU Cibil. The good news is that the share of good loans is going up.

The ‘Iceberg Study’, which aims to identify stressed loans that are not yet visible to investors, shows that Rs 10.4 lakh crore of loans have been recognised as NPAs on a commercial credit of Rs 54.2 lakh crore as on March 2018. This is an increase of Rs 2.4 lakh crore over the previous year and has been triggered by the RBI’s February 2018 circular requiring banks to classify all delinquent loans as NPA. However, there is another layer of bad loans of Rs 3.1 lakh crore, comprising borrowers who have at least one credit facility, which has been recognised as an NPA.

“We have observed that the level of undeclared NPAs is lowest in banks that have been placed under PCA. These loans (yet to be declared as NPA) are largely with other public sector banks and private banks,” said Pillai. Eleven PSBs, with extremely high levels of NPAs, have been placed under the PCA, with restrictions on lending. Pillai adds that this a powerful case to remove lending restrictions on PSBs and encourage them to lend, particularly to the small-scale sector since most of the stress is concentrated in large corporates.

According to Pillai, there is another layer of loans that has delayed payments amounting to Rs 6.6 lakh crore that are not NPAs. “Banks need to be watchful of these loans and identify reasons for the delay. Historically, around 15 per cent of irregular loans slip into NPAs,” said Pillai.