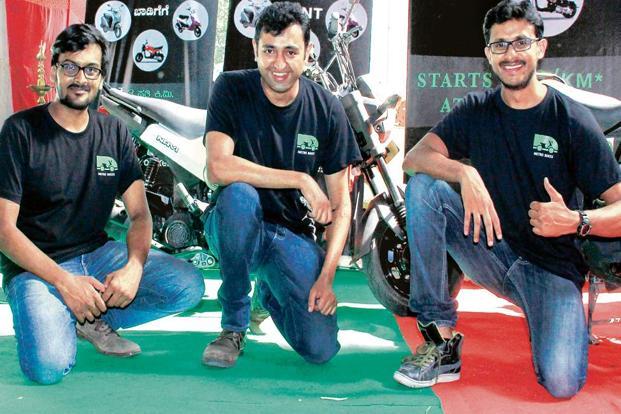 New Delhi: Metro Bikes, a rental start-up for scooters and motorcycles, has raised $12.2 million in a Series A funding round led by Sequoia Capital India and Accel Partners, which will help the start-up develop technologies and expand into newer markets, said a senior executive.

Metro Bikes, which is run by Wicked Ride Adventure Services Pvt. Ltd, also rebranded itself as Bounce “to avoid the confusion of being only present in metro cities,” Vivekananda Hallekere, co-founder and chief executive at Bounce told Mint on Wednesday.

He said TaxiForSure founder Raghnunandan G., an unnamed global fund and a Bengaluru-based high networth individual also participated in the latest round.

The deal is among the largest Series A funding round for a local start-up and an indication of growing investor interest in the estimated $4.5 billion two-wheeler rental market in India.

Post the deal, Shailesh Lakhani, managing director at Sequoia Capital India, and Anand Daniel, partner at Accel, will join the start-up’s board.

“There has been a lot of attention on four-wheel shared mobility across the world,” said Lakhani. “While it makes sense in other markets, a service like Bounce has immense potential in India, where limitations of space and cost has always made two-wheelers more popular.”

The company plans to utilise the capital to develop its soon-to-be patented-keyless technology to operate vehicles without a key, focus on markets in Hyderabad and Bengaluru and expand to major metro cities by 2020, said Hallekere.

“We are gearing up for putting more investment on the ground. We are also coming out with better versions of the keyless mechanism,” he said. “Also, we will look out for building our hardware solutions and getting more leasing partners on the supply side.”

Bounce lets riders choose a scooter or a motorcycle from a particular hub and drop it any other location with the help of the keyless mechanism that generates a unique pin, offering a dockless sharing service.

Bounce partners with dealers for the two-wheelers, with 80% of its assets on lease, said Hallekere. It charges on average ₹6 per kilometre from a rider.

Bounce has a fleet of about 100 two-wheelers, which it plans to grow to more than 2000, said Hallekere. It has partnered with government companies such as Bengaluru Rail Corp. and Hyderabad Metro Rail Ltd along with food and grocery delivery companies, he added.

Beyond scooters and motorcycles, Bounce has also ventured into bicycles, electric pedalled bicycles and kick scooters. It competes with bike rental start-ups including Stoneheadbikes, Rentabike, and Vogo among others.

Founded in 2015 by Hallekere, Anil Giriraju and Varun Aghi, Bounce also plans to eventually convert its entire fleet into electric vehicles and is in talks with partners in China and Taiwan to source such products.

“Last mile connectivity for public transportation remains unsolved across India, and we believe that there exists a large market opportunity,” said Accel’s Daniel.