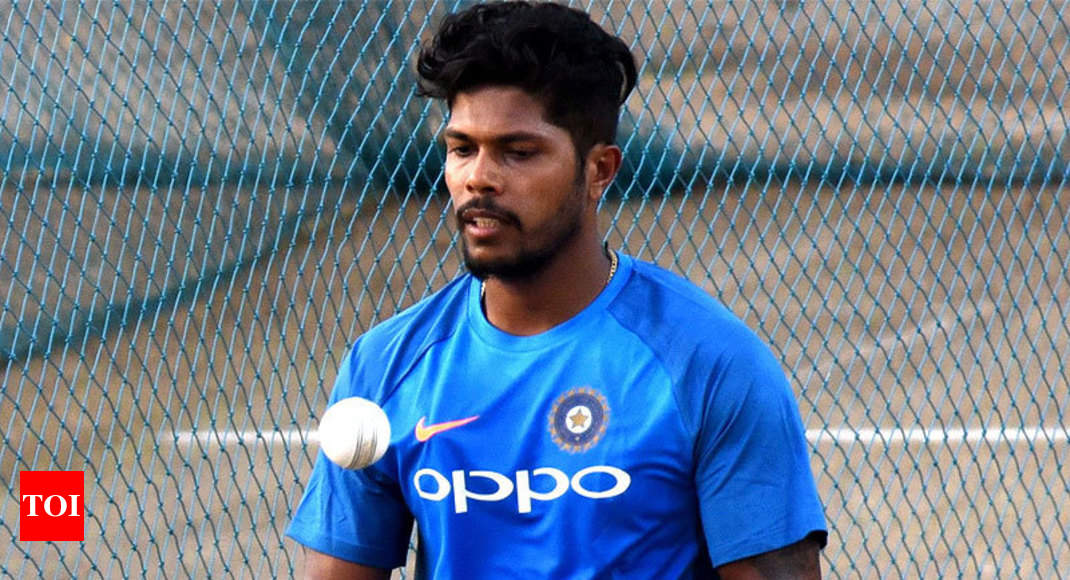 MALAHIDE: Sachin Tendulkar has called it a “perfect recipe for disaster” and now India pacer Umesh Yadav has condemned the use of two new balls in One-day Internationals, saying it is killing the art of reverse swing while putting fast bowlers at great disadvantage.

The ‘two new balls’ system was introduced by the ICC in 2011. Since then, there has been a spurt in the number of high-scoring games, the latest being the world record total of 481 posted by England against Australia.

“Because of the two new balls, it is tough for the fast bowlers to contain runs. If you have only one ball then it gets older and older and you get reverse swing. With two balls, reverse swing is rarely seen in the ODI game right now, so it is difficult for fast bowlers especially if they don’t get the lengths and the yorkers right,” Umesh said.

The pacer further spoke about the difficulties fast bowlers are facing whilst using two new balls in England.

“If the ball isn’t doing anything in the death overs, it is tough to handle that pressure especially if the wicket is very flat.

“Nowadays we have seen that the wickets are very flat and in England they are now regularly playing on that kind of surfaces. They are scoring 480, so definitely it is very challenging for the fast bowlers.

“Even so, we are looking forward to this challenge because we are playing good cricket and we will try to play our best in England,” he said.

Umesh has shrugged off his lack of opportunities in international cricket and said that he is looking to play against England during the impending tour.

After a gap of five years, Yadav was picked for the second T20 International against Ireland yesterday. He took 2-19 as the hosts crashed to a 143-run defeat and handed India a 2-0 boost ahead of the T20I series against England starting Manchester on July 3.

“This is like my comeback after five years,” said Umesh.

“I am definitely happy with my performance in this game and I enjoyed myself a lot in this outing. I just tried to keep it simple and tried to do the same things as I did in the IPL. In the future also, I will try to do the same routine and see how it works out for me.”

Umesh hasn’t played ODI cricket since September 2017, and while he did play against Afghanistan in the one-off Test at Bengaluru recently, he last played a proper series in Sri Lanka, almost a year ago.

Whilst considered one of the most improved bowlers recently, he missed out on nearly the entire home season and also warmed the bench during the tour of South Africa.

Talking about his lack of opportunities, Umesh said, “The team is very well balanced right now. Bhuvneshwar Kumar and Jasprit Bumrah are doing well, and then there are other pacers too, like Mohammed Shami.

“So it gets difficult to get a chance, even though the team management is trying their best to give us opportunities to play. They are trying to rotate and give chances to all fast bowlers, so I am just waiting for those chances to come.”

He is only focussed on his own preparation and performance.

“I am trying not to think about whether it is happening or not. I am trying to think about the process of bowling, and whenever my turn comes, about giving 100 per cent on the field for the team. If I keep giving performances like in the IPL or today, it will only help me get more chances.

“So this is a happy headache for the selectors. They will see what is happening and maybe I will get more chances as I am waiting for those chances,” he added.

Attention now turns to the long tour of England, where team India will play three T20Is, three ODIs and five Tests. While the Test series is some time away, the immediate challenge is to stop the English juggernaut in the limited-overs’ arena.

When asked about the plans to counter England’s free-flowing aggressive style of play, Umesh replied, “All of our bowlers did well in the IPL so we are trying to do the same things here.

We have different plans, A and B, so if one doesn’t work out we try to execute the second plan because you cannot go in with one plan only. That’s how you play with an aggressive and confident mindset while bowling.”

There is an air of positivity in the Indian camp after two convincing wins against Ireland.

“All our bowlers are confident about what we can do in England. There will be few adjustments from how we bowled in the IPL, for sure, but we will work out what they are and how to implement them.

“We have a lot of variations up our sleeves. More importantly, we are enjoying bowling together at the moment, supporting each other and bowling as a group.”