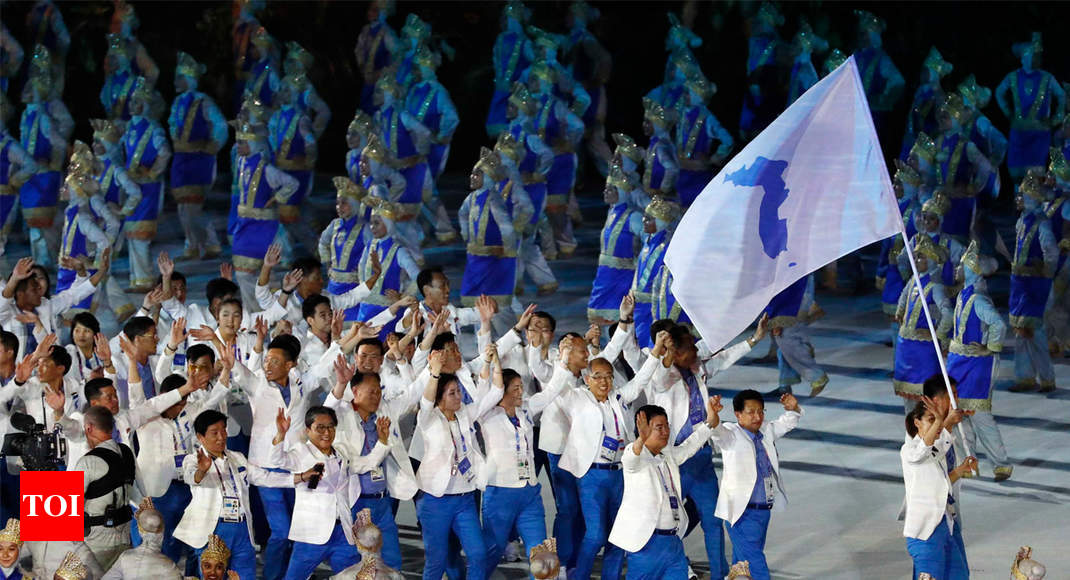 JAKARTA: North and South Korea marched together in a stirring display of unity as the Asian Games, one of the world’s biggest sports events, opened in a blaze of colour in Jakarta on Saturday.

South Korean women’s basketball player Lim Yung-hui and North Korean footballer Ju Kyong-chol jointly held the Korean Unification flag aloft as they led the athletes out to an ovation from the packed crowd.

It is the second such symbolic gesture this year by the two Koreas, who also walked together at the Pyeongchang Winter Olympics opening ceremony – an event that heralded an unprecedented warming of ties.

The North and South, still technically at war, are joining forces in women’s basketball, canoeing and rowing during the 40-sport, two-week regional Olympics in Jakarta and Palembang, a port city on Sumatra island.

South Korean Prime Minister Lee Nak-yon and North Korean Deputy Prime Minister Ri Ryong-nam could be seen clutching hands in the VIP seats as they raised their arms aloft to greet the team.

The ceremony opened with a skit showing President Joko Widodo doing stunts on a motorbike in Jakarta’s streets before riding into the Gelora Bung Karno stadium, to roars from the crowd.

About 1,500 dancers in traditional dress then performed a tightly choreographed routine before Afghanistan led the athletes’ parade into the stadium.

There were huge cheers when the two Koreas, whose athletes together number about 1,000, marched in together wearing pristine white and blue uniforms.

Widodo was then seen dancing in his seat as Indonesian singer Via Vallen took to the stage, before the stadium fell silent to honour the victims of the recent Lombok earthquake.

“You can feel proud of your home country Indonesia,” said Sheikh Ahmed Al-Fahad Al-Sabah, president of the Olympic Council of Asia, before Widodo declared the Games open — an announcement which triggered a volley of fireworks.

It provided a vibrant start to the Games, whose build-up has been dogged by logistical headaches and security fears after Indonesia suffered its deadliest terror attack in a decade in May.

Indonesia has also been grappling with its latest earthquake disaster after strong tremors in Lombok, an island in the east of the vast archipelago, left more than 400 people dead.

About 18,000 athletes and officials from 45 Asian countries will be at the Asiad, organisers said, looking to make their mark across a range of sports from swimming to sepak takraw and bridge.

The Asian Games encompass nearly the full Olympic programme and are considered the pinnacle by many participating nations, for whom Olympic success often proves elusive.