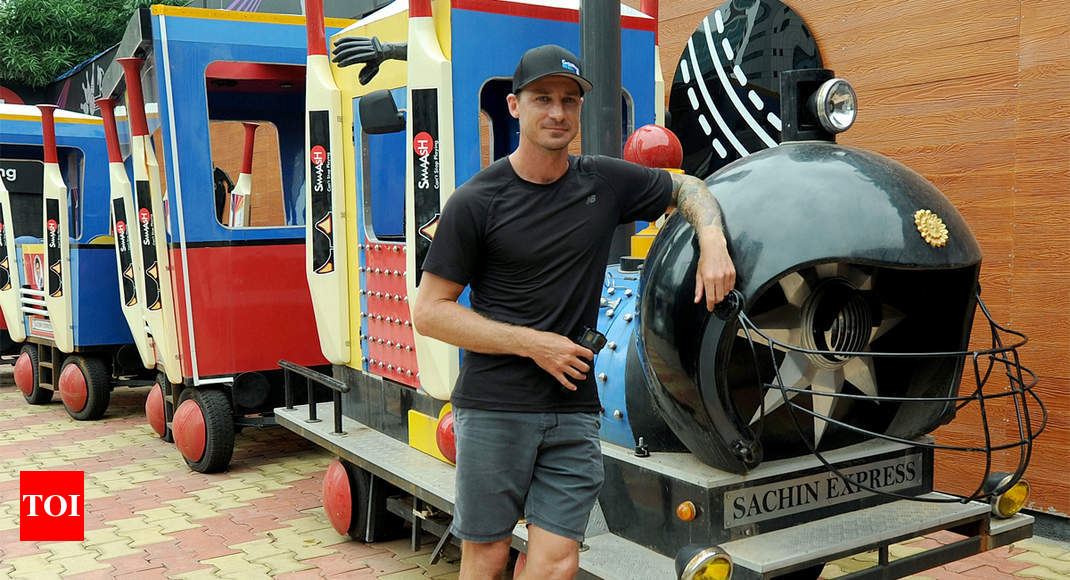 MUMBAI: If he’s been left ‘frustrated’, as his captain Faf du Plessis put it, after bagging just two wickets in two Tests in South Africa’s recent 2-0 rout in Sri Lanka, Dale Steyn does a pretty good job of concealing it. An all-time great fast bowler, but now struggling with injuries and form in the twilight of his career, the 35-year-old, in the city for a GoPro event, come across a man who may have crossed his prime, but still wants to go out on his own terms.

Even as he’s been excluded from the ODI side which takes on Sri Lanka in the forthcoming series, Steyn is eying the 2019 World Cup as the perfect stage for his swansong from limited overs cricket.

“If I’m honest with you, I’m trying and would like to get to that World Cup. If you look at batting line-up, our top six have all together played 1000 games, but our lower half – eight to eleven, who’re currently playing, have not even played 150 games. So, you need to draw experience from somewhere, and I’m hoping that would be my trump card when the selection comes to the World Cup. I may not necessarily play all the time, but I think just being there, I might be able to help add experience. After the World Cup, I don’t see much more reason in playing white ball cricket for South Africa. The next World Cup is in four years’ time, I’ll be 40-41. There will be no reason for me to go to that WC, and the other guys will be hitting their prime. After the World Cup, it wouldn’t a surprise if a lot of senior South African players retire or slowly work their way out of the ‘white ball side’,” he explains.

However, Steyn isn’t done with Test cricket yet. With 421 scalps in 88 Tests@22.64, he is South Africa’s joint-highest in that format, and it’s clear that he wants to go further than just break Shaun Pollock’s record. “I would like to play as long as I can possibly play. And I feel that I have finally gotten over this heavy cloud of injury,” he says.

Steyn points to an interesting reason for South Africa’s first Test series defeat to Sri Lanka since 2006. “The wickets were obviously tough to play on. To be honest with you, Sri Lanka played good cricket for the whole time that we were there. When we arrived there, we didn’t have the best conditions. The (pitches at) nets were green and sport. The seamers were having a field day in the nets, and the batters were just playing and missing or ‘nicking. And then we got a warm-up game, and it (the pitch) was an absolute road. The team that we played against bowled only 10 overs of spin in the whole of a two- day game. They just bowled seam. And then when we got into the Test matches, I think they bowled six overs of seam in two Tests! So, they played their card right, you know. And the preparation for us was really difficult,” he elaborates.

However, Steyn wasn’t in a mood to put that up as an excuse for the defeat. “It’s not something you moan about. You’ve just got to get on with it. But it’s something we’ll remember at the back of our heads the next time they tour South Africa. So, I think the preparations was really difficult. and they came out trumps, they did their homework and planned well. and if you want to win a series, and work your way up the rankings. It’s 100% not cheating. It’s playing by the book and playing it correctly, and they did exactly that. Hats off to them. They played better cricket,” he complimented the Lankans.

SA’s debacle in Sri Lanka reaffirmed the belief of those who feel that Test cricket is losing its charm because most teams are struggling away from home. While the idea of scrapping the toss to help in curbing home advantage was done away with by the ICC Cricket Committee a few months back, Steyn is fine with the novel concept. “If you’re going by the traditional ways, then that is just cr**. Because WG Grace would be rolling in his grave if he heard that there was something called a ‘free hit.’ And a batsman can be out but he’s not out but still score runs off the ball because it’s a no ball. The tradition of cricket has gone out of the window. Twenty20 cricket has changed the game. If someone saying that the toss is a traditional thing, they’re blind, because the game has changed so much. They need to keep up with the times,” he believes.

Steyn, however, backed batting legend Sachin Tendulkar’s statement that using two balls was hampering pacers in One-day cricket. “The wickets in One-day cricket have been a bit too flat. You’re taking the bowlers completely out of the equation. The two-ball rule is just ridiculous. The ball’s only 25 overs old, not 50. You’re also taking the skill out of the game. I grew up watching Wasim Akram and Waqar Younis reverse swing the ball and you try naming me one bowler in the world today who can reverse swing the ball, because it’s just not allowed,” he fumes, before sounding out as serious warning.

“Players are now going to the extent of taking sandpaper on the field. It might sound funny, but this is a desperate plea for cricket to change. Players are going to get into more trouble trying the ball to do something, if you don’t do something about the game.”