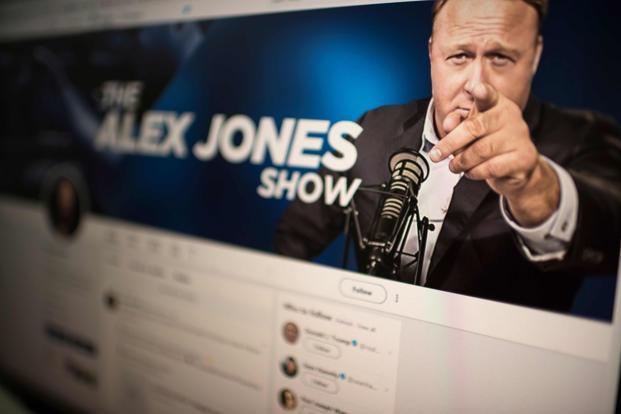 The restrictions against Jones were a reversal from earlier in the month. Photo: AFP

While lamenting abusive conduct on Twitter Inc., CEO Jack Dorsey said any move to block content based on political or social views would stoke already rising concern about the power of social media companies.

“We can’t just keep changing randomly based on our viewpoints,” Dorsey said in an interview that aired Sunday on CNN television’s “Reliable Sources.” “That just adds to the fear of companies like ours making these judgments.”

Dorsey’s comments aired a day after President Donald Trump, a devoted Twitter user, wrote on the site that “Social Media is totally discriminating against Republican/Conservative voices.” Earlier in the week, Twitter put temporary limits on the account of right-wing conspiracy theorist Alex Jones for violating the company’s policies against abusive behaviour.

“More and more people have fear of companies like ours and the perceived power that companies like ours have over how they live and even think every single day,” Dorsey said in the interview. He said he understands that feeling, but doesn’t see himself as having that power.

Trump, in his tweet, said social-media companies are unfair in the way they apply their rules. “They are closing down the opinions of many people on the RIGHT, while at the same time doing nothing to others,” Trump tweeted, saying his administration “won’t let that happen.”

While Dorsey has conceded his workforce is left-leaning, Twitter has insisted that many allegations of anti-conservative bias reflect only actions against those engaged in threats or other banned behaviours — regardless of the political content.

The restrictions against Jones were a reversal from earlier in the month, when Dorsey said Jones would be allowed to continue to use Twitter because he hadn’t violated the company’s rules. That was at odds with moves by Facebook Inc. and Google’s YouTube, which pulled Jones off their platforms over content that violated hate-speech and harassment policies. Jones, who had previously hosted Trump on his “Infowars” show, among other things claims the Sandy Hook Elementary School shooting in 2012 was staged by the government.

Dorsey, who has declared his intention to improve the “health” of Twitter conversations, said during the CNN interview that he’s open to changing the platform to help avoid abuses.

Possible initiatives including placing lower emphasis on follower counts and adding context to misinformation, he said, adding that he was reluctant to give a timeline.

Social-media sites such as Twitter and Facebook spent years boasting that they were committed to open discourse, only to face backlash as they became platforms for the spread of false information, racist violence and election interference. That’s prompted a debate about whether the companies should continue expanding the sliver of content they have long blocked, such as terrorist propaganda.

The controversy, though, has also fuelled concerns about censorship. Trump’s re-election campaign manager, Brad Parscale, wrote in a August 16 opinion piece in the Washington Examiner that a law providing social companies a shield against liability for most content posted by users is enabling a “new Orwellian impulse.”

Even as Trump attacks social media, staffers for House Energy and Commerce Committee told Twitter officials during an August 16 meeting that the panel could subpoena Dorsey, according to a person familiar with the talks. Dorsey is also slated to testify September 5 before the Senate Intelligence Committee to discuss social media companies’ efforts to prevent Russian meddling in US elections, according to a different person familiar with those talks.