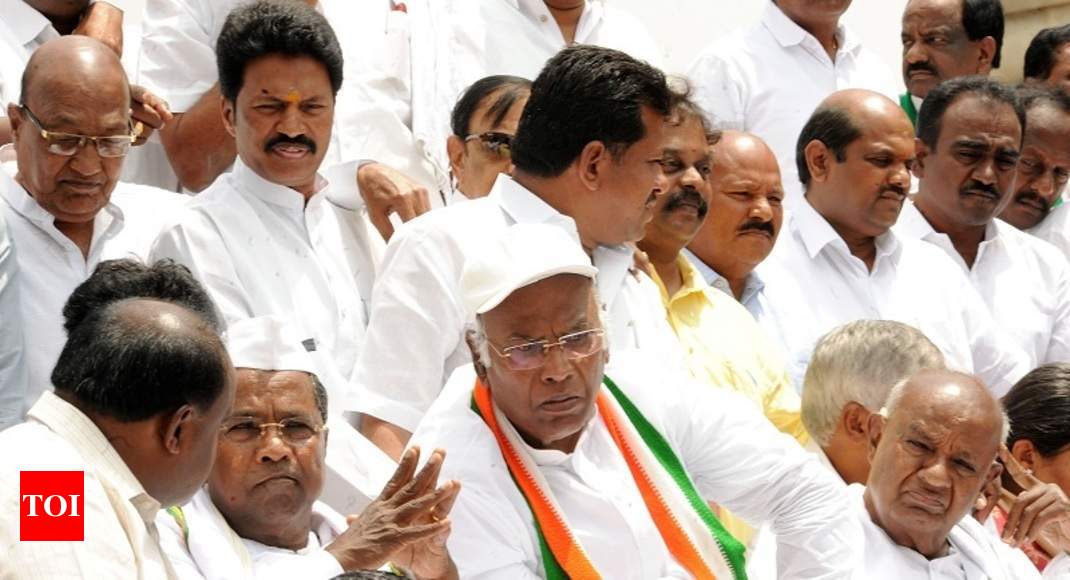 NEW DELHI: This week, two Kannadiga veterans have returned from the sidelines to bask in the glory that was considered past them.

Mallikarjun Kharge, the Congress face from Karnataka, and former PM H D Deve Gowda of JD (S), are being talked about in political circles after their promotion on the national stage.

22 years after the “fumble harmer” became the PM, and following many years of diminishing profile that was viewed as his fading away, Gowda is suddenly back to holding forth on national politics — he is speaking about the dynamics of ‘grand opposition alliance” for 2019.

The rejuvenation of the fading patriarch stems from his son HD Kumaraswamy’s unlikely ascension to chief ministership of Karnataka.

Gowda turned Kumaraswamy’s swearing-in into an opposition jamboree, with anti-BJP satraps from Mamata Banerjee to Mayawati and Akhilesh Yadav to Congress brass led by Sonia Gandhi descending on the venue. It became a show of strength of the “secular alliance”.

Mirroring the spike in the fortunes of his foe from Karnataka assembly, Kharge has become the AICC general secretary, entrusted with the task of the important state of Maharashtra. The weighty organisational assignment added to his portfolio of leader of Congress in Lok Sabha and chairman of the Public Accounts Committee of Parliament.

For Gowda, there has been no looking back since his son presided over the opposition show in Bengaluru last month.

Many feel Gowda senses that situation in 2018 is similar to 1996 when fate pitchforked him onto the national scene.

A satrap who signed on Gowda’s election as PM explained that he benefitted from North Indian leaders — Mulayam Singh Yadav, Lalu Prasad, Ajit Singh, Sharad Yadav, Ram Vilas Paswan et al — refusing to agree on each other’s candidature. It was plain envy or overlapping political constituencies. A Congress leader from Karnataka said Gowda recently told his supporters that he would “lead the Mahayuti” in 2019.

In case of Kharge, the AICC appointment triggered speculations if it meant that he would quit the post of party leader in LS and Rahul Gandhi will take charge himself. But Congress managers denied the possibility.