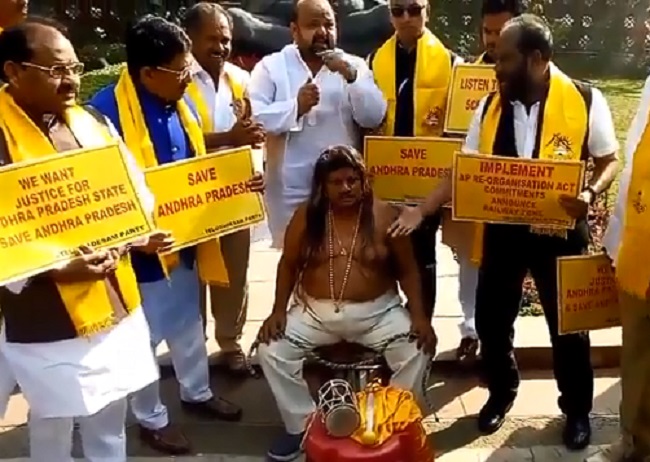 With no sign of a truce between the BJP and its ally Telugu Desam Party, its MP K. Rammohan Naidu on Friday said the party chose principles over preservation of the alliance.

TDP national president and Chief Minister Chandrababu Naidu is likely to hold a meeting in Amaravati to discuss the party’s future strategy on Saturday.

Meanwhile, TDP MPs scaled up their protests in both Houses of Parliament during the day.

The Rajya Sabha was adjourned twice following protests by members from Andhra Pradesh, including those of the TDP.

The protesting TDP and YSR Congress members forced an adjournment in the Lok Sabha too, soon after question hour began.

Even as it is seeking to cut ties with the BJP, the TDP is worried that the YSR Congress may take its place in the alliance. The TDP accused the YSR Congress of trying to score “brownie points” by piggybacking on the TDP’s protest. Mr. Rammohan Naidu said the YSR Congress is trying to take advantage of the situation by making repeated visits to the Prime Minister’s Office.

“We chose to protest against our own alliance partner for the rights of Andhra Pradesh. We have chosen principles above the preservation of alliance,” Mr. Rammohan Naidu said in a statement. He added that the patience of the people of Andhra Pradesh had been tested to the breaking point.

The Congress was playing the victim card for a crime it had committed, the TDP said, reacting to Congress president Rahul Gandhi’s tweet expressing support for the cause.

Chief Minister Chandrababu Naidu had two telephonic conferences with his MPs since Finance Minister Arun Jaitley’s speech in the Lok Sabha on Thursday in reply to the budget debate.

The party expected Mr. Jaitley to make concrete assurances in his speech.

“He [the CM] told us to continue our protests in both Houses. He is back from Dubai on Friday evening. We will be meeting him on Saturday and we will evolve our future strategy based on the feedback from the cadre at the district level,” a TDP MP said.

One of the key demands of the TDP is to bridging the resource gap. At the time of division, the State was promised ₹16,087.76 crore. “The Centre, after taking four long years, has released only ₹4,000 crores,” Mr. Rammohan Naidu said.