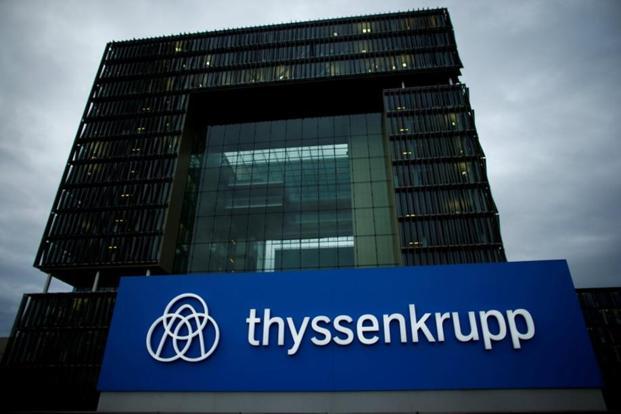 A logo of ThyssenKrupp AG is pictured outside their headquarters in Essen, Germany. Thyssenkrupp’s adjusted operating profit, slumped 46% to 332 million euros, while revenues were up 2% to 11.2 billion euros thanks to a rise in overall sales and order intakes.

Frankfurt: German conglomerate Thyssenkrupp, grappling with a leadership crisis and investor calls for a major revamp, reported a quarterly loss on Thursday as cost overruns in its industrial unit weighed on the bottom line.

The Essen-based group said it booked a net loss of 131 million euros ($151 million) in the third quarter of its financial year, after seeing a 120-million-euro profit over the same period a year earlier.

Thyssenkrupp, which makes everything from elevators and submarines to car parts, already announced last week it was slightly lowering its 2018 outlook because of slower sales and higher than expected costs in its industrial solutions division.

Among the projects causing headaches were a marine project in Turkey, a cement plant in Saudi Arabia and a biofuel power plant in Australia, it said.

The group’s underlying, or adjusted operating profit, slumped 46% to 332 million euros, while revenues were up 2% to 11.2 billion euros thanks to a rise in overall sales and order intakes.

“We see a mixed picture. The bottom line is, that we are not satisfied with the current results,” said interim chief executive Guido Kerkhoff.

“Notably the cash flow is unsatisfactory, and that is not a situation which can be sustained long term. We have to improve significantly across all our businesses.”

The 207-year-old firm has been in turmoil ever since Heinrich Hiesinger quit as CEO last month, shortly after completing a landmark deal merging Thyssenkrupp’s steel activities with India’s Tata.

Supervisory board chief Ulrich Lehner followed him out the door soon after, warning of “many” job losses if activist investors pushing for an aggressive restructuring of the sprawling group got their way.

Looking ahead, Thyssenkrupp said it now expects adjusted profits before interest and tax for its 2017-2018 financial year to reach “around” 1.8 billion euros.

But it still predicts net profit will be “significantly better” than the prior year’s 271 million euros.