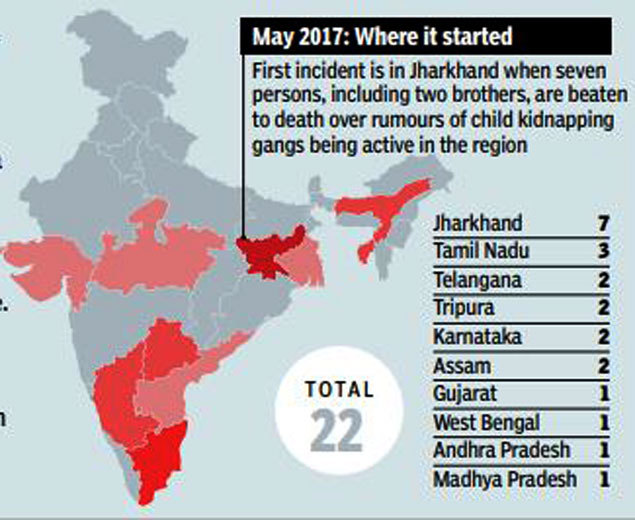 There was a time when only children who refused to sleep were told, “the child-lifters are coming for you”. Today, this has turned into a call for blind violence, from Gujarat to Tripura, as soon as strangers are sighted, even worse if they are travelling in a closed vehicle. Fake Whatsapp messages whip up a frenzy in minutes and before any sanity can prevail, innocents have been clobbered to death
Nerve Points Of A Fake Forward

Target the outsider : In almost every incident, the victim is an outsider – somebody from another area or state, another religion or simply somebody who looks different or speaks a different language; the poor and destitute are particularly vulnerable

Mass panic: Mobs are mobilised in seconds because the message has reached scores at the same time, giving real-time details of the so-called suspects

Settling scores: In at least one instance, a villager found his photo being circulated as that of a child-lifter. A teenager from another village who had a grudge had posted the message

* After a mob killed a woman beggar in Ahmedabad on June 26, police contact beggars and ask them to alert cops in case a beggar is suspected of committing a crime or a mob builds up around one of them

* Rema Rajeshwari, SP of Jogulamba Gadwal district in Telangana, visits villages, clambers onto makeshift stages and warns people against falling for fake news. She got village-level police officers to get in touch with sarpanchs and different communities through WhatsApp so they can monitor the messages doing the rounds and nip trouble in the bud

* Don’t lynch and kill people who are new/If you have a suspicion dial 100/Rachakonda police is here to protect you/Telangana police is with you – croons traffic inspector Anjapally Nagamullu of LB Nagar to make villagers aware. He believes the song works better than sermons