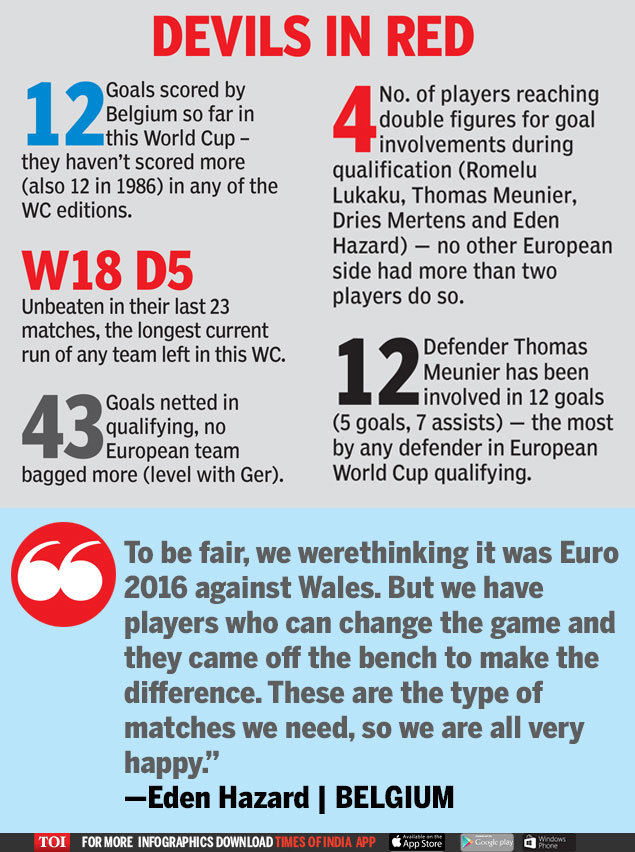 There was a sense of deja vu around Kevin de Bruyne’s searing run down the middle on Monday night that shattered Japan’s dreams. For once, your mind veered to those Premier League nights in the first decade of the 2000s when a certain Thierry Henry was doing the same for Arsenal at the theatre of Highbury.

Years have rolled by, Henry has left those shores and is now an apprentice coach under Roberto Martinez in the Belgian side. Apprentice is probably an understatement — the French legend works with the Belgian attacking line, trying to infuse an instinct that made Arsenal such a loved team in those years.

Not that de Bruyne has learnt the art of those galloping runs from Henry; he has done it over the years for the clubs he has played for — be it Wolfsburg or Manchester City. But the attack-at-all-cost football that this Belgian side plays may have something to do with Henry.

On Monday, it was this instinct that saved the day for Belgium. Two goals down against a resolute Japanese unit which always had a man behind the ball, raised fears of another favourite biting the dust. But this Belgian lot seems to be made of a different mettle, they showed they can withstand extreme scrutiny.

Most of the Belgian seniors are EPL stars, they know how to deal with pressure on a daily basis. And the attacking game that they dished out on Monday seemed a little different from the one the Spaniards and the Germans showed in their disastrous campaigns this year. While the two former world champions used those short passes in search of space even at the cost of complicating things just a little bit, Belgium have kept it more direct. While de Bruyne goes to that same tiki-taka classroom when he is playing for his club under Pep Guardiola, he modulates himself beautifully while doing the job for Belgium, and there could well be Henry’s influence there.

“Thierry brings something completely different. He’s someone who has been in the situation of having to develop the mentality of chasing the dream of winning something special for his country. He is very much an important figure in our staff and we hope he will pass on his experience to the players,” Belgian coach Martinez had said when Henry took the responsibility of working with the Belgian attacking line.

The coach had indicated that it’s the “simplicity” of Henry’s style the team was trying to tap into to make it a world-beating unit. “The attacking quality we have in our group is very rich. Henry’s experience of being able to go through that situation that we have as a team is going to be very important. Then when you go into the basics of simple attacking drills, as a player you can get a lot from him,” Martinez explained the Frenchman’s role.

The team has done well since then and it was this simplicity that kept them alive after the severe Japanese test. Next up are a bunch of boys who are masters of the simple game — Brazil. And who else can Belgium turn to but Henry to beat the Brazilians at their own game!