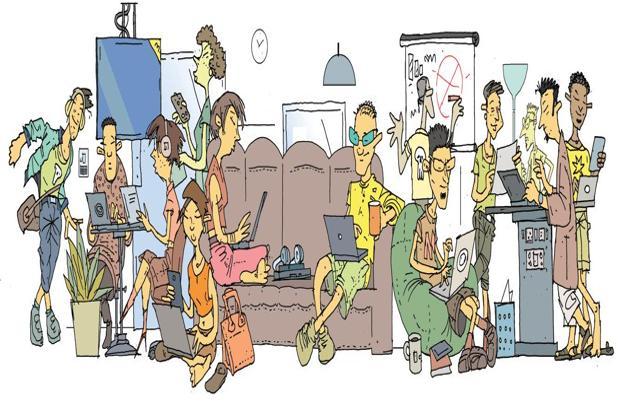 Since millennials constitute the largest age-group wise segment in the Indian workforce, their attitudes towards work increasingly matter.

New Delhi: How does one transition from heading a fast-paced strategy division in one of the world’s largest brewers of alcohol to running a cute, little start-up that aims to hand paint memorable moments captured in a photograph? Well, ask Rohaan Aditya Dang, a 27-year-old former head of strategy at Diageo’s operation in Vietnam, who did just that.

“I was sick of the 9-to-5 corporate structure. I wanted to explore something new,” he says. So, Dang relocated to Bengaluru three years ago and now runs Make My Painting, which through its roster of in-house artists seeks to connect art, technology and memories—a vision eerily reminiscent of Don Draper’s iconic ‘Kodak moment’ monologue in the television show Mad Men, a period drama set in the cubicle-filled, American office culture of the 1960s that took over much of the world and is now beginning to disappear.

The pushback is coming chiefly from people like Dang, a typical example of an emerging clique of millennials— people born between 1981 and 1996, according to the Pew Research Foundation—who are increasingly looking for both purpose and flexibility in their work life. Stability is the least of their concerns. According to a recent Deloitte study, 43% of millennials expect to quit their jobs within two years of joining.

Since millennials constitute the largest age-group wise segment in the Indian workforce, their attitudes towards work increasingly matter. India not only has the highest population of millennials in the world, but they also function as the chief wage earner in a large chunk of the country’s households. This workforce churn is not restricted to just the corporate sector, but cut across the class and skill hierarchy—creating, for example, an army of Swiggy ‘delivery executives’ or Ola ‘driver partners’, who are not in it just for the salary surge driven by incentives, but also for the flexibility in work hours and the ability to be one’s own boss.

“Millennials don’t just want to work for two square meals a day, but wish to be self-starters and trendsetters,” says Ritesh Agarwal, founder and chief executive officer of Oyo Hotels, a company whose average age is 27. Over the last decade or so, executive search firms have also been observing that the culture of “growing with the company” is gradually dying down.

While previous generations considered financial rewards and future prospects while applying for a job, millennials are increasingly looking for flexibility in terms of work hours and location. Most young workers have varied interests, so they prefer taking up jobs that give them the freedom to explore different verticals. “Earlier, if one stayed in a company for long, they were considered to be more stable, but today it’s all about the variety of work you have done,” says 23-year-old Kesavan Nampoothiry, a content writer at a leading e-commerce company in Bengaluru. “Sticking to one particular job may not give you the freedom to explore.”

Even employers have begun to accept that their young workforce seek a meaningful experience at work, and that their employees have multiple interests, both within the workplace and outside. “For the previous generation, work was the centre of everything, but for this generation, their universe has sports, personal hobbies, fitness, socialising, and work and more,” said the chief people officer of a leading professional services firm. “Work is just one of the many things they want to do.”

While established brick-and-mortar companies are constantly scrambling to adapt, several multinationals claim to have figured the secret sauce to offering a work environment that is suitable for their young employees. Our workplace gives individuals the freedom to work from where they want to; we are at peace with that, says Sameer Wadhawan, head, human resources at Samsung India. “Within the office, we offer a lot of flexibility. We have a lot of collaborative spaces like lounges,” he says.

Then, why are millennials still expecting to shift jobs frequently?

“The person who makes decisions in the organisation is most likely of my father’s age and he is unable to place himself in my shoes,” explains Dang.

The age-old concept of someone knowing more than you because they have worked in the organisation for a longer duration does not seem to exist anymore. Millennials are increasingly looking to work at organisations that have approachable executives open to ideas from younger associates.

“Most millennials are looking for a flat structure at work. They expect the kind of work culture that exists at companies like Facebook,” says Dang. “You do have different levels (at Facebook), but it’s a flat structure and people are approachable.”

Young workers want their voices to be heard. They want to gain easy access to the top executives in the organisation and get recognised for the work they do without having to wait for the right opportunity to knock at the boss’s door. There are enough who doubt the practicality of these demands though. Amit Agarwal of Stanton Chase, an executive search firm in New Delhi, says it is unreasonable for millennials to expect large MNCs to have a flat structure. “How many people will report to a chief? That (flat structure) is not going to happen,” he says.

The opportunity to do different kinds of work along with being part of different teams within an organisation interests most millennials because they are constantly on the look out to learn new skills.

“There is constant monotony because when you work in a team, the team is focused only on one type of problem and you don’t get to do different things,” says 22-year-old Tanush Vinay, who is employed at the Samsung R&D Institute in Bengaluru.

With continuous learning emerging as a big buzzword, more and more professionals are simply taking up freelance work to explore fresh opportunities in the professional world. “The problem of doing the same work every day is solved when you become a freelancer,” says 28-year-old Sheela Rathinum, who designs digital marketing campaigns for brands such as Novelty Tea House and IPL’s Mumbai Indians.

It also helps that India’s largest generation by size is more informed and well connected. They prefer jobs that are challenging and purpose driven.

“What is likely to attract this generation is a workplace that promises learning opportunities, challenging assignments, freedom to innovate, and flexible working arrangements,” says Sandeep Kohli, partner and talent leader, EY, India. “To leverage this talent pool effectively, organisations must start evaluating how the new generation will respond to a professional set up – the goals they set for themselves and their expectations from the organisation they work for.”

Though large corporations organise events, workshops, and team outings among other things to break the monotony of the everyday routine in their offices, there is no change being witnessed in the atmosphere. There is barely any opportunity for employees to have any interaction with people from different companies.

“Being able to interact with other people is not only refreshing but is also very dynamic, because, then, everyday becomes a new day,” says Dang.

Inadequate network opportunities is driving people away from full-time jobs which demand working from a particular place for a fixed number of hours.

“As a copy writer, sitting at a desk and staring at a mall from my office doesn’t work for me. I need to get out, meet people and see things,” says Rathinum. Millennials who run their businesses out of co-working spaces say it is easier to hire young employees because the atmosphere is vibrant and interesting, allowing them to network with people of their age and get fresh ideas.

A January 2018 report by PayPal titled, ‘Insights into the freelancer’s ecosystem’ shows that most Indian freelancers are under the age of 40 and 41% among them have witnessed rapid growth the previous 12 months.

The advent of the gig economy—a market characterised by freelance or short-term contracts—has seen a large number of young workers quit their full-time jobs. Varun Gujjar, 32, worked as a senior web developer for three years with an advertising agency before he made a shift to freelancing about five years ago.

“There is no limitation to the amount of money that you can make. More the number of hours you work, the more money you make and there is nobody supervising you, which is great,” says Gujjar.

Though millennials’ attitude towards work and workspaces is definitely changing, head-hunters say the shift may not always be positive. Immediate social media broadcasting of job changes or promotions often leads others to make impulsive decisions, they say. “If one person changes his job or gets promoted, it puts a tremendous amount of pressure on the rest of them to match up,” says Agarwal. “The previous generations did not face this kind of pressure which made them stick to their jobs.”

Of course, Indian being a land of infinite contradictions, those seeking a new work culture co-exist seamlessly with those seeking just about any work. The fact that every time the Indian Railways advertises openings, the rush to get in pushes applicant numbers to upward of a hundred times the vacancies shows something, says Radhicka Kapoor, senior fellow, Indian Council of Research on International Economic Relations. “There are still people looking for stability,” she says. But the byword is change.