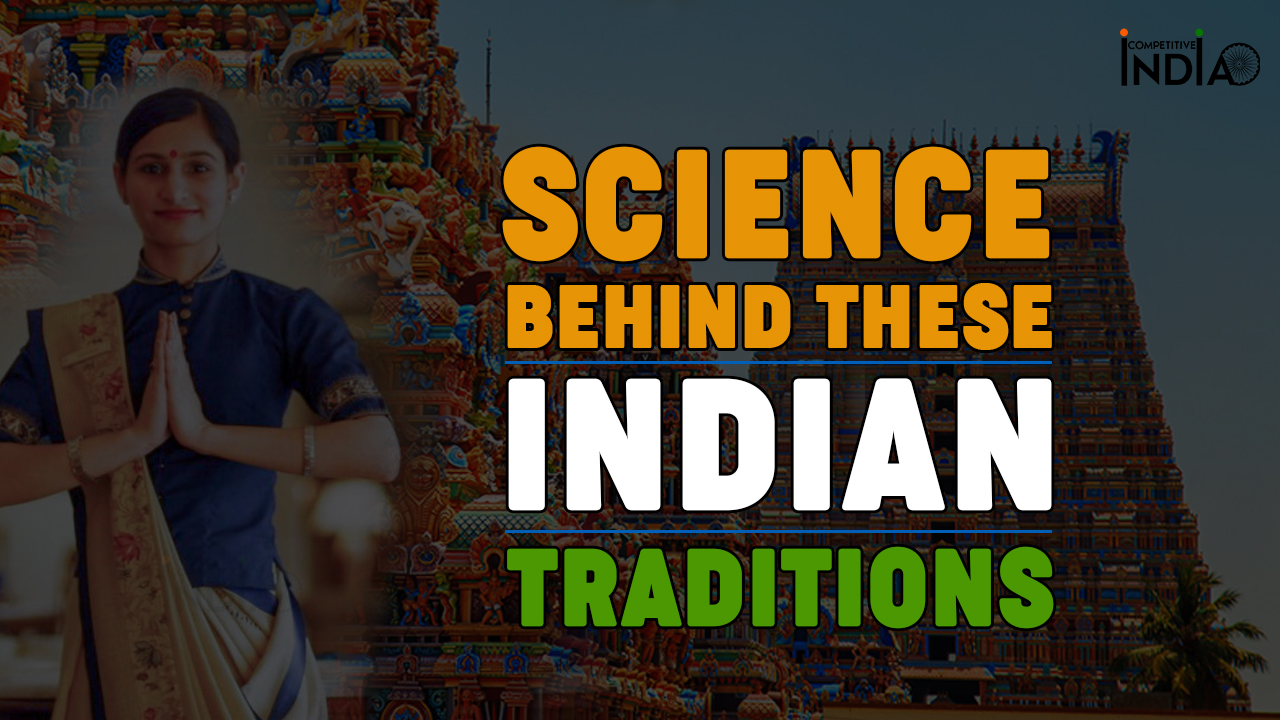 India, a country of having settled human civilisation dating back to 7000 years is a country of spirituality. Being birthplaces of religions like Hinduism, Jainism and Buddism, India is a country which has adopted every religion and has inculcated in its culture the best practices of these religions and this is what we call as ‘Indian traditions’. Indian traditions are very unique because they have been adopted from the diverse cultural practices of different religions/communities and here we find a strong spiritual belief for these traditions. At the same time, we can ignore the scientific reasons behind these traditions and the reasons which still have kept them thriving in this modern world. So, let me take you to some of these Indian traditions and find the scientific logic behind it.

1. Namaste: Let’s start with the first thing first, What do you do when someone comes to your house or when you meet someone? It can be Namaste, Sat-Sri Akal, Vanakam, Namoshkar or Parnam. In all of these the common gesture to greet the person is by joining palms of both hands together with a smile to show respect to him or her. In return the person also greets us with the same kind of gesture, this tradition of greeting by joining hands dates back to the time immemorial. Many sculptures dating back to 3000 BCE to 2000 BCE have revealed sculptures in the Namaste posture, so this is one of the most important traditions in Indian culture.

In yoga this gesture is known as ‘Anjali Mudra’.it is also known that tips of the fingers are major energy points in the human body and when we bring them close to one another there is a flow of energy to the mind of the person doing it. This energy brings a state of calmness and happiness in mind by activating the release of toxins, so this way it brings happiness to both the persons doing it thereby creating an aura of happiness around them. So, this is the science behind our traditional greeting- Namaste!

2. Surya Namaskar: This is the first thing which a common Hindu does when he wakes up in the morning. Surya Namaskar means greeting the Sun, it involves bending towards the sun and performing 12 steps or ‘Aasans’. All these aasans are derived from the Indian culture of Yoga which is recognised all over the world. Performing Surya Namaskar improves digestive system, helps in bringing down blood sugar levels, reduces anxiety, ensures regular menstrual cycles in women, brings glow on the face and keeps one active throughout the day. This Indian tradition of Surya Namaskar has strong scientific support throughout the world and Yoga, which is the mother of this has gained remarkable popularity in the western world.

3. Fasting: In Indian culture, we find a unique tradition of fasting where people don’t eat for some duration/period of time and sometimes don’t even take water to worship God. They generally do so during some festival or some day of spiritual importance. This practice is known by different names in different religions such as “Vrata” in Hinduism and “Roza” in Islam, but the concept of fasting remains the same. Our scriptures say that we should fast to impress God who will bestow upon happiness and fulfil our wishes but there is also a scientific justification available for this.

It is a scientifically proved fact that fasting for at least one day in a year help in detoxification of our body and it re-energises our body. Moreover, it has many health benefits like improved blood sugar control, improved heart health, efficient brain function and if done periodically it also helps in losing weight.

4. Sacred importance of Tulsi: In Hinduism, Tulsi is considered as a sacred plant and you can find it in every Hindu’s courtyard. According to Hindu Mythology, the tulsi plant is the goddess Tulsi and people worship her daily in the morning and evening. You will find that they consume leaves of tulsi in many ways, starting from prasad which they offer to God, to treat cough and cold, using it in beverages like tea and even when a person is about to die they put it in his/her mouth.

These uses of tulsi for different purposes has scientific evidence attached to it. Tulsi is widely known for its medicinal properties and keeping it at home is considered as good for health. Consuming tulsi leaves directly or indirectly helps in regulating blood pressure, bowel movement, urination, reduces nausea, cures skin infections and helps in treating stomach cramps. When taken as a beverage either in tea or with water, it helps in treating cough and cold. So, this practice of treating tulsi plant as a sacred one has not only religious importance but also a strong scientific argument.

5. Significance of hanging “Nimbu-Mirchi” – This is something which you can find outside any house, shop and even outside some workshops in India. It consists of 4-5 green chillies and lemon tied vertically in a black thread, and you can easily find people selling them in the morning, at dailymarkets and even at red-lights on roads in India. People in India believe that hanging them outside their houses, shops, factories, workplaces keep the evil spirit and ill-will of people jealous of you away from you and your work. They also believe that doing so will result in their business prospering and keep them happy.

Obviously, there is no scientific support to this ‘keep the devil away’ theory but it has a benefit which indeed cannot be overlooked. Chillies and lemons are natural disinfectors and hanging them on the walls or in shops keep insects like lizards, spiders and other pests away. So, there is a reason good enough to do this and that is why it is an important part of our tradition.


These are just five Indian traditions which I have mentioned here, but there are many practices which Indian people follow and they all have scientific reasons behind them. I have listed some of them here for you if you are eager to know more about them and the link for reasons behind them.