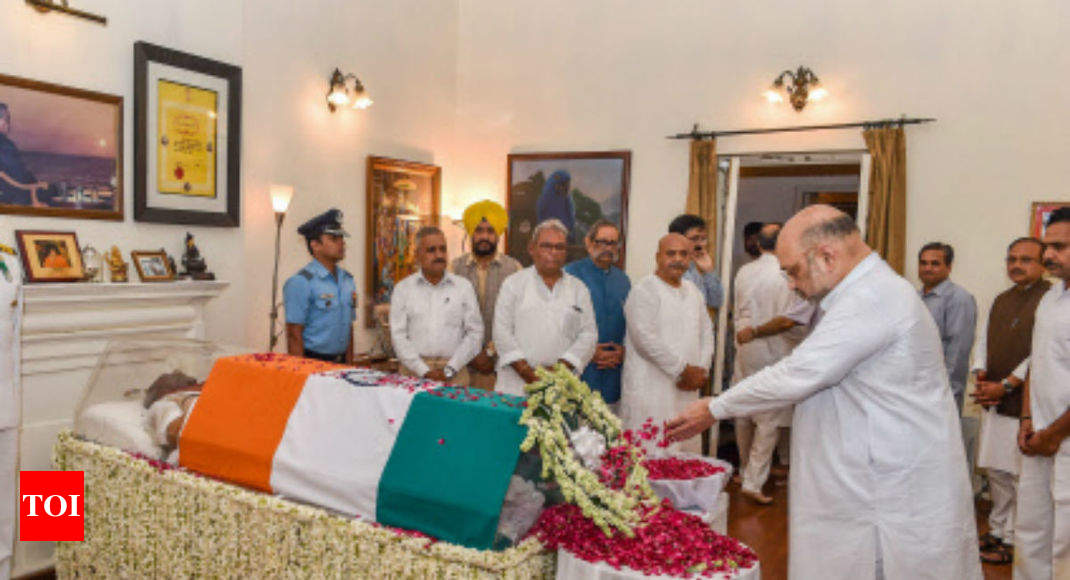 NEW DELHI: BJP and its ideoological parent RSS, paid rich tributes to the talismanic leadership of former Prime Minister Atal Bihari Vajpayee lauding his contribution in bringing the saffron party to the centrestage of Indian politics.

Speaking to reporters BJP president Amit Shah said, “The pole star of India politics is no more. Atalji has been a multi-talented personality. A country has lost a big statesman on his demise. The void left by his death in Indian politics will take a long time to be filled. Not only he was worked as a BJP leader but guided the country like a true hero.”

Praising Vajpayee for his values and decisive leadership, RSS chief Mohan Bhagwat and general secretary Bhaiyyaji Josh said in a statment, “With his ideas and conduct, he established the Indian cultural values in his public life. He was an intense, decisive leader who was acceptable to all”. The vacuum created by the demise of such a tall leader will not be easy to fill, the Sangh said.

Shah said Vajpayee, as BJP’s founding president, nursed a banyan tree in the country’s politics with his tenacity and tireless work. “A rare politician, brilliant speaker, poet and patriot, his demise is not just a irreparable loss for BJP but also for the entire country,” the BJP chief said, adding that his thoughts, poems, foresight and political skills would always inspire and guide all.

The BJP chief further said, “On the one hand Atalji as the head of a party in opposition played the role of an ideal opposition while on the other hand he provided the country a decisive leadership as Prime Minister.”

In a blog, the party president quoted several poems of Vajpayee terming him as humility personified. “Pt Deendayal Upadhyay had foreseen the future of Atalji… Nehru had said oneday Atalji will lead the nation and Chandra Shekhar used to call him “Gurudev” in Parliament. Manmohan Singh had termed Atalji as Bhishmpitamah of politics…he was such a leader that parties across the ideologies used to listen to him in rapt silence,” Shah wrote in his blog.

Terming Vajpayee as nucleus of the anti-Congress politics and was the only politician elected from six different Lok Sabha constituencies. “Vajpayee envisioned an India without fear and hunger…his regime witnessed India’s emergence as nuclear power and the visionary river inter-linking projects,” Shah recalled.

Shah visited AIIMS twice and was in constant touch with the party leaders assigning them responsibilities in the wake of Vajpayee’s deteriorating health condition.