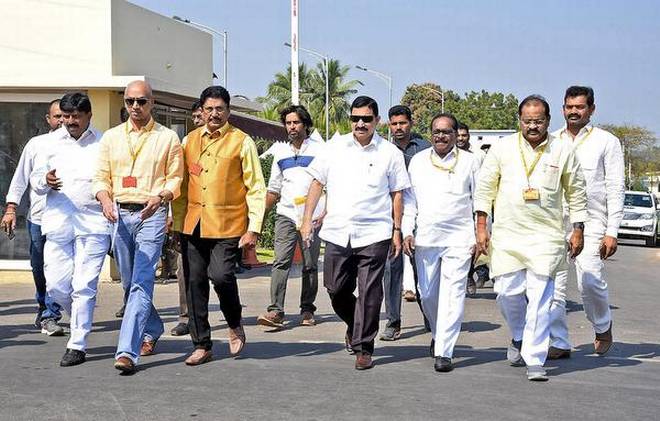 The media, including those representing a couple of national channels, waiting on Sunday outside Chief Minister N. Chandrababu Naidu’s residence near Karakatta in Undavalli were seen counting the time from the time MPs had entered Mr. Naidu’s residence.

The scribes were expecting that their long wait would not go waste. But a phone call from Union Home Minister Rajnath Singh to Mr. Naidu had literally changed the course of the Telugu Desam Parliamentary Party (TDPP) meeting. Mr. Naidu asked his party MPs to hold their horses making it clear that there would not be any break in the coalition. Before the meeting, several TDP leaders openly aired their dislike for the BJP and wanted the party to break the alliance. The MPs, who walked in in a combative mood emerged with a calm posture and their body language apparently signalled there would not be any fight to finish approach. And, all the tough posturing in the last two days by the TDP fizzled out with Union Minister of State for Science and Technology Sujana Chowdary saying, “Don’t talk of divorce, let us talk of marriage only.”

The TDP MPs, however, managed the show saying the party supremo directed them to mount pressure on the Centre until justice was done. Mr. Chowdary said the people were unhappy with the Union Budget. The TDP would scrupulously follow the public mood and opinion, he said.

Anakapalle MP Avanti Srinivas said they were ready to resign to protect the interests of the State. The MPs would abide by the decision of TDP national president and CM Chandrababu Naidu, he said. Rajya Sabha member T.G. Venkatesh said if the Centre fulfils the promises that it had made “in whole”, the TDP would be “friends again”, and if not, the TDP was “ready for anything”. Hindupur MP Nimmala Kishtappa said the fight would continue.

Vijayawada MP Kesineni Srinivas (Nani) said the TDP was committed to the development of the State. The promises made in the AP State Reorganisation Act must be fulfilled. The Budget might be good for some but not for AP, he asserted.

The Telugu Desam Party, the BJP’s only ally in the south, was disappointed with how little was allotted to the State in the Union Budget.