Museums in India often have a sad, forsaken air. Statues seem aloof in glass cases. Paintings look bleak in poor lighting. Artefacts come with snatches of information on scraps of paper. Even when the world outside is hurtling towards a glimmering tech future, the museums seem unable to let go of a dusty past, especially in the way their viewers interface with objets d’art. The Centre for Indian Music Experience (CIME), arguably India’s first museum dedicated to music, wants to sing a different tune.

A museum for music anyway cannot be a space where one can gaze at a collection and move on. It needs to be aural rather than visual. It needs to be experiential rather than material. So if you walk into CIME in Bengaluru’s JP Nagar — the museum will be fully launched in about two months — you will find 40 iPads across different galleries that contain multimedia content to support the exhibits.

The Sound Garden, a section that is already open to the public, has touch-sensitive installations of chimes, gongs, bells and reeds that are set to twelve musical notes. Visitors can experiment with combinations and create their own melodies.

There are also documentaries, interactive games and sing-along kiosks that will explain niche musical genres and traditional gharanas. “We allow people to create melodies by combining classical Indian and Western music. This is to help them understand the nuances of each,” says Suma Sudhindra, directoroutreach, CIME.

She says the inauguration of the museum, which will be run by the nonprofit Indian Music Experience Trust, got delayed as they found it difficult to raise through donations and crowdfunding the Rs 42 crore that was needed. “Even now, we are short of Rs 7 crore and hope to get assistance from the state government,” says Sudhindra. “However, the museum is almost ready for public viewing, and despite difficulties, we have not compromised on the quality of digital exhibits and offerings. That’s what will draw the footfall, especially of youngsters.”

While digitisation has reinvented museums in the West, turning them into vibrant cultural spaces, its presence in India is limited. While government-run museums are limited by protocols and lack of funds (maintenance typically occupies a minuscule percentage of annual budgets), private museums are collaborating with industry experts to equip the spaces with technology and make them more relevant.

The Partition Museum in Amritsar, for instance, is about everyday objects and memories of the traumatic event. Visitors can source details of people who were affected by it. “Our upcoming archive has over 5,000 artefacts — these include oral history, photographs, letters and video footage. This might help people identify links to family or friends they were unaware of. Or, years later, it might help them hear their ancestors’ voice again,” says curator Mallika Ahluwalia. The museum, which has seen 1.5 lakh footfall since its launch in August 2017, will also launch a mobile application where users can access videos and text related to Partition. 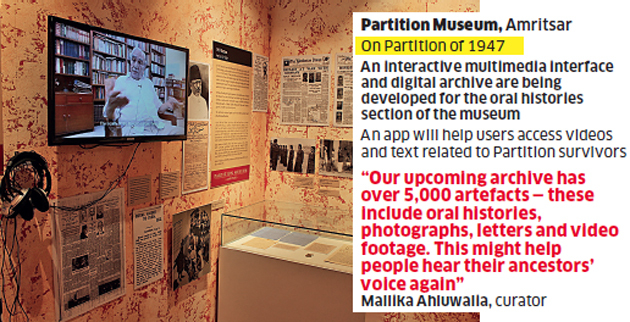 Initiatives like Google Arts & Culture are currently helping about 50 museums in India with their digital life-cycle — from online collection management to digitisation on mobile and desktop. Programme manager Simon Rein says technologies like 3D printing, art cameras, street views and 360-degree videos are drawing attention to interesting and lesser-known sub-cultures. “It is more than a set of museums, but a growing collection of stories,” he says. “For instance, some topics that have attracted attention recently include ‘Women in India: Unheard Stories’ on achievers who have shaped history and society.” “Women in India: Unheard Stories” is a virtual collection of artworks on Indian women sourced from many cultural institutions.

Thanks to technological innovations, Mumbai’s century-old Chhatrapati Shivaji Maharaj Vastu Sangrahalaya (CSMVS) has seen a 35% jump in visitors in the last five years, says director-general Sabyasachi Mukherjee. That said, the man credited with the revival of one of India’s most popular museums from a state of dilapidation, also believes that technology is just complimentary to good content curation.

“The CSMVS has achieved several of its goals with a combination of indigenous skills and the latest digital technologies, thereby sustaining not merely as a showcase of antiquities but a place of interaction between the past and the present,” Mukherjee says. “In short, we are maintaining the balance between technology and organic experience.” CSMVS gets about 2,500 visitors every day.

Vaibhav Chauhan agrees with Mukherjee that a museum must get the basics right. The secretary of Sahapedia, an online open resource on Indian art, culture and history, is spearheading Museums of India, a digital repository of India’s museums, irrespective of size, funding, location or ownership. It plans to map 500 museums by next year. “The idea is that a strong online presence will drive offline footfall,” he says.

Given that over 33% of the country’s museums are state-run, governments have to build capacity and drive footfall, says Tejshvi Jain, founding director of ReReeti, which works on museum revival. She believes that curation should be audience-focused and not exhibit-focused, as technology that is not aligned to visitor needs and management goals will be futile in the long run. “Often, a preliminary understanding of the audience is missing. This results in investments in technology becoming a liability instead of an asset.”