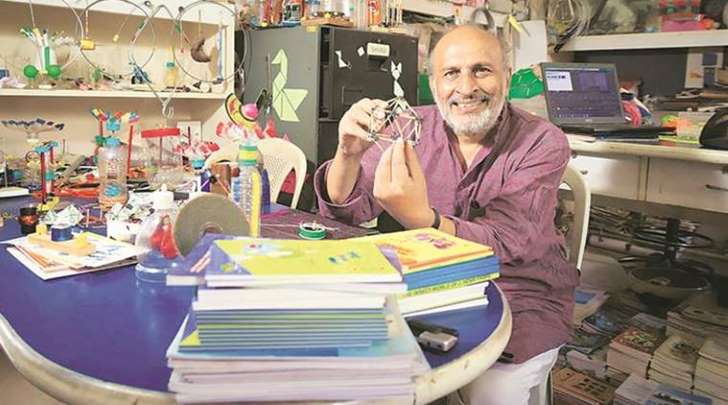 Science is about challenging authority and asking questions, says 64-year-old Arvind Gupta, who has been awarded the Padma Shri this year. Known for turning trash into toys that children can make themselves while learning the basic principles of science, Gupta dismisses Union minister Satyapal Singh’s statement that Charles Darwin’s theory of evolution of man was not scientific as “silly”.

“These statements do not encourage science,” Gupta, who has translated 380 award-winning books on science and math in Hindi, told The Indian Express. “The scientific community has criticised such statements that do not encourage science,” says Gupta, who has dedicated over 35 years to popularising science and making it a fun-learning experience for children.

With 1,500 science experiments documented in photos and 8,600 short video clips on YouTube in 18 languages that has reached out to 63 million people across the world on making improvised toys, the Pune-based toymaker draws inspiration from Gautam Buddha, who he says urged people not to believe in anything simply because they had heard it but to draw upon observation and analysis and find if it agrees with reason.

“Science is like that. It is not just me who is fascinated by science and uses these simple toys to popularise it. There are so many more who are passionate about inculcating a scientific temper in children.

For instance, P K Nanavati, who is associated with Dr Narendra Dabholkar’s superstition eradication movement, has dubbed 1,000 videos in Kannada that depict how toys can be made from trash. Or then former Home Secretary Madhav Godbole’s wife Sujata, who has translated 36 books by Isaac Asmiov — an American writer known for his works on science fiction — into Marathi,” Gupta says.

“While the award has come from out of the blue, I am happy about the national honour,” he says modestly. Gupta recalls the manner in which science was taught in villages in the 70s. As a student at IIT-Kanpur, Gupta says it was a revolutionary time.

“There were students’ protests, the Naxal movement and such political churning unleashes social energy. We decided to play a meaningful role in people’s lives,” Gupta says as he speaks of his participation in Dr Anil Sadgopal’s NGO Kishore Bharati in the Hoshangabad science teaching programme in Madhya Pradesh in the late 70s.

At the Children Science Centre at Inter University Centre for Astronomy and Astrophysics, Gupta worked for 11 years and, right from the ‘Matchstick Mecanno’, he showed how great teaching aids and other scientific experiments can be created from domestic items.

While Gupta retired following his fight with prostate cancer where he had to undergo 42 rounds of radiotherapy, his passion for science education remains undaunted. As Sujata says, “The first thing that strikes you about Arvind Gupta is his untiring energy and commitment to work for children.”