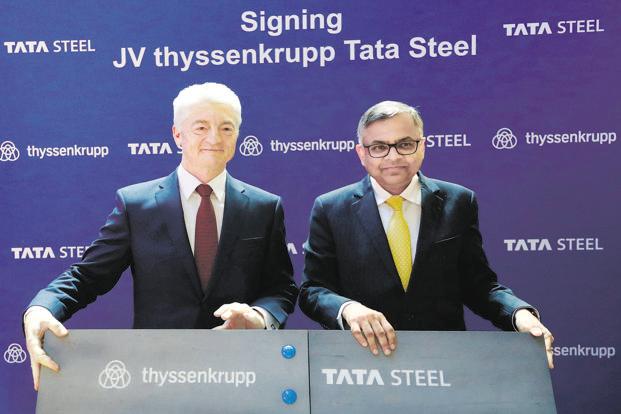 Mumbai: Despite its apparent concessions, has Tata Steel actually come out on top in the joint venture agreement with German competitor Thyssenkrupp? Analysts believe that ultimately, Tata Steel’s concessions have been “modest” and far below what the more vocal of Thyssenkrupp’s investors have been gunning for.

Foreign brokerage firm Jefferies said in an analysis of the deal that the 5% lower economic interest that Tata Steel has agreed to at the time of a future IPO “implies $200-350 million of value shift in favour of Thyssenkrupp” against the original 50:50 agreement on sharing IPO proceeds. This offsets only part of the total value shift in favour of Tata Steel that Jefferies had earlier estimated of $500-600 million.

In fact, US-based activist investor Elliott Advisors has accused Thyssenkrupp’s management of offloading assets into the joint venture too cheaply. Elliott had submitted an estimate of the two companies’ fair valuations, demanding an 80% stake in the joint venture for Thyssenkrupp for its more profitable operations. Financial Times reported on 1 July that two members of the Thyssenkrupp board voted against the deal while one member abstained. The newspaper also reported that Swedish activist investor Cevian Capital had voiced concerns regarding the deal’s valuations.

In a conference with journalists in Brussels on Monday, Heinrich Hiesinger, CEO, Thyssenkrupp, insisted that his company had received a fair valuation. “We believe that the 55:45 split in IPO proceeds and the synergies (that will accrue) from the joint venture are a fair representation of our valuation and will address concerns that were raised about the valuation gap.”

Thyssenkrupp’s management has also been under pressure to present a strategy update to the board of “life after steel” and to improve margins in its capital goods and elevator business – its new stated areas of focus – and disposal plans for its industrial solutions and material sciences verticals. Managements at both firms have said that Thyssenkrupp Tata Steel BV – the new company and a 50:50 joint venture between the groups—is expected to have €17 billion in sales and joint labour force of 48,000 workers. It will be the second largest steel player in Europe in the flat steel market after ArcelorMittal.

Both companies have stated that the JV will help achieve annual synergies of 400-500 million euros, through joint purchasing including logistics services, higher equipment utilization and reduced administrative expense. If, in the future, Thyssenkrupp decides to take the JV public, the proceeds will be split 55:45 in the German partner’s favour.

Speaking to Mint a few days earlier, Atanu Mukherjee, president of global metals and energy consultant MN Dastur & Co., said: “I think it’s a great move for Tata Steel in terms of improving its position after its acquisition of Corus in 2007. With this, assets are pooled in a way that maximises value for Tata Steel globally.”

At Monday’s press conference, N. Chandrasekaran, chairman, Tata Steel, told journalists that his company remains committed to building steel in Europe over the long term. “The Tata group’s approach has been to find a solution for Europe (steel operations). The discussions with Thyssenkrupp took time and there were pension issues to be resolved. There was a certain environment that was needed to create a strong JV with a strong future. This is a good solution not only for shareholders but also for employees.”