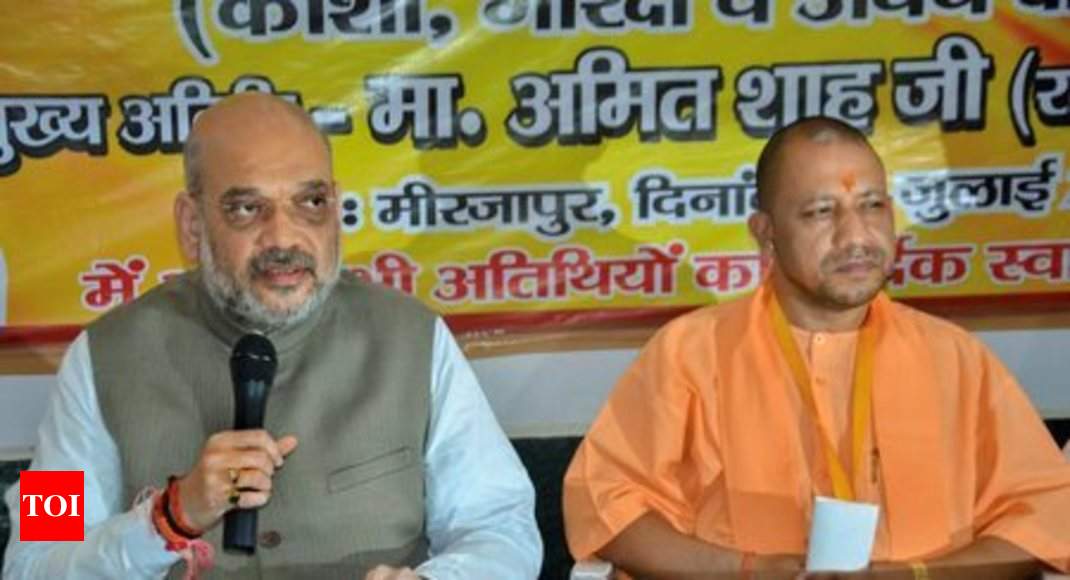 VARANASI: BJP president Amit Shah on Wednesday called upon party workers to be ready for the scenario where SP and BSP come together for the 2019 polls, emphasising an alliance between Akhilesh Yadav and Mayawati could potentially create complications for the party’s bid to sweep the politically crucial UP like in 2014.

Addressing a closed-door meeting of the party’s social media warriors, Shah said the challenge to BJP in UP could become tougher in case “Bua” (BSP chief Mayawati) and “Bhatija” (SP chief Akhilesh Yadav) joined hands, and asked them to start working straightaway to increase BJP’s vote share in the state from 44% in 2014 to 51%.

According to sources, in his address to the party’s IT cell at Deen Dayal Upadhyaya Trade Facilitation Centre auditorium, Shah asked the participants to give him details of constituencies where the likely ‘Bua-Bhatija’ alliance could pose a challenge.

On getting a muted response, Shah sought to rally the spirits of the audience saying, “There is no threat for BJP from any grand alliance but we will have to be prepared. The party will definitely take up its its vote share… we will make it possible and take the number of seats from 72 to 74 in the state.”

He further said, “I am coming here after visiting more than 17 states. We are in power in 70% area of the country. Imagine what response leaders like Mamata Bannerjee, Chandrababu Naidu or H D Deve Gowda will get if they come to cities like Bareilly, Agra or Varanasi to address a rally. They are regional leaders and have no hold on votes out of their states.”

Referring to welfare schemes launched by the Centre, Shah asked party workers to collect details, do research and spread it by making it readable on all forms of social media.

“False propaganda and blame game being played by opposition parties against BJP should be countered effectively. BJP governments have not done anything for which partymen should feel ashamed. Go and tell people about the benefits given to them by us… people should be made aware how Modi’s leadership is being admired across the world,” Shah said.