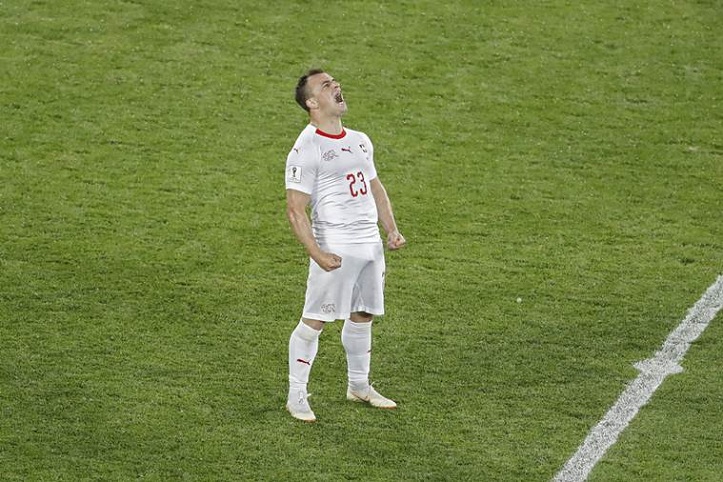 Switzerland became the first team come from behind and win a match in this World Cup. They keep themselves alive in the race for the Round of 16.

A last-minute Xherdan Shaqiri breakaway goal handed Switzerland victory Friday as they came from behind to defeat Serbia 2-1 in Kaliningrad. The win puts Switzerland in pole position to make it out of a tough Group E that contains five-times winners Brazil but they were pushed all the way by the Serbs. It was a sweet victory for Shaqiri and fellow Swiss goalscorer Granit Xhaka, who along with team-mate Valon Belrami were booed relentlessly by Serbia’s fans throughout. Shaqiri, Xhaka and Belrami trace their roots to Kosovo, a former province of Serbia, a fact which had stoked tensions before the match. Both Shaqiri and Xhaka pointedly celebrated their goals by making an eagle gesture with their hands, viewed as a symbol of defiance Xherdan Shaqiri celebrates after scoring his side’s second goal. (Source: AP)Serbia dominated the first half with Aleksander Mitrovic and Dusan Tadic wreaking havoc among the Swiss defence. But the fact that they got just one goal out of that period of dominance went on to bite them in the second half. Switzerland slowly clawed their way back and Granit Xhaka’s screamer somewhat turned the tide. Switzerland started dominating possession and putting the Serbian defence under pressure. Xherdan Shaqiri then kept his calm in a one-on-one situation with the keeper and stroked the ball home to make Switzerland the first team to come from behind this World Cup. Serbia could have qualified had they won this match and they now have to win their last match to qualify now. That last match, is against Brazil.