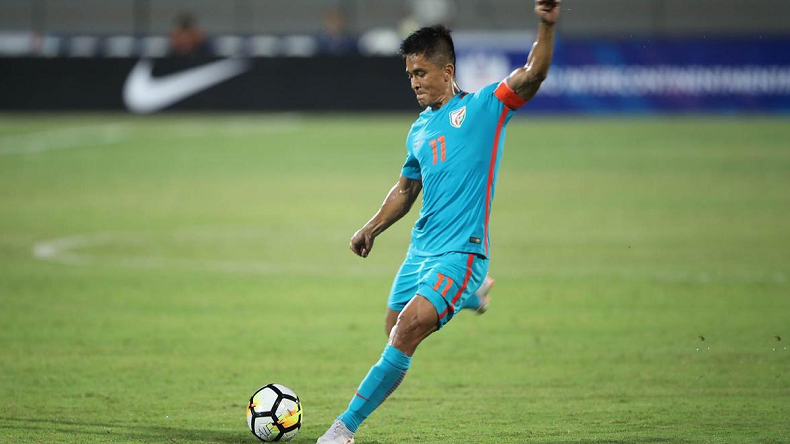 In his 100th International match, skipper Sunil Chhetri scored a brace to lead India”>India to a 3-0 win over Kenya in the second match of the Hero Intercontinental Cup, here on Monday.

Neither team were on attacking mode post the heavy downpour at the stadium.

A freekick for India”>India was of no avail as they failed to encash it. Despite Kenya employing men to break through India”>Indian defence, they were unable to create a clear scoring opportunity.

With Kenya, attacking from distance and accumulating corners to test India”>India’s pedigree in set pieces, the defensive line of Sandesh Jhingan and Anas thwarted any dangerous chances for the opposition.

In the 22nd minute, Skipper Sunil Chhetri made history by becoming the second India”>Indian ever to bag 100 International caps.

But, Chhetri’s shot from distance after Jeje had caused panic in the opposition defence, went inches over the bar.

Three minutes later, Gurpreet Singh Sandhu was called into action and the goalkeeper dived to save a shot from a distance.

Udanta Singh proved to be a threat down the flanks and his outburst of speed caught the Kenyan defence off-guard quite often.

Changing over, Kenya almost gave India”>India a scare in the 49th minute when Ovella Ochieng burst through the centre of the India”>Indian defence but could only shoot just a few inches away from the goal.

In the 55th minute, India”>India had a golden opportunity to take the lead but Sunil Chhetri failed to make a proper connection with on the volley after Halicharan’s cross from the flanks.

With the momentum in India”>India’s favour, Constantine’s men kept on attacking and in the 63rd minute Pronoy Halder’s shot almost took the lead for India”>India but some acrobatic goalkeeping by Kenya kept his shot at bay.

In the 68th minute, Sunil Chhetri scored in his 100th International cap, courtesy of a penalty kick to give India”>India a solitary goal lead. In the 71st minute, Jeje Lalpekhlua hammered home from close range to double India”>India’s lead over Kenya after a quick play on the flanks to make most of India”>India’s attacking momentum.

In the last few minutes, Sunil Chhetri burst onto the opposition goal chipped the ball over the onrushing goalkeeper to finish a sublime move into the back of the net, giving India”>India a 3-0 lead.
With his second goal of the match, Sunil Chhetri scored his 61st goal in International football in 100 International matches.

The India”>Indian defence line contained the Kenya initiatives to reduce the deficit and kept the Kenyan forwards at bay as the full-time scoreline read 3-0 in India”>India’s favour.

India”>India is scheduled to face New Zealand on June 07 in the Hero Intercontinental Cup.