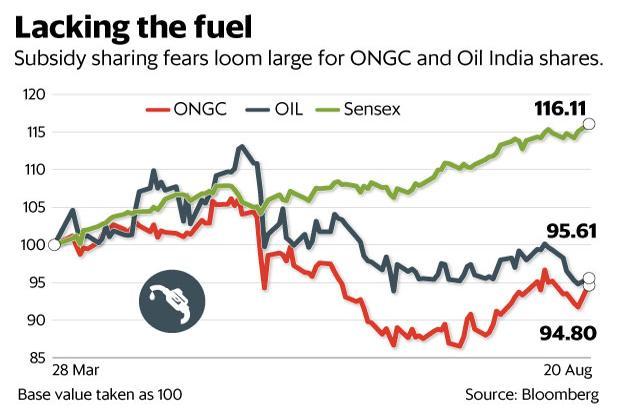 Shares of Oil and Natural Gas Corp. Ltd (ONGC) closed more than 3% higher on Monday. Investors’ concerns about a subsidy sharing burden seem to have alleviated a bit. On Saturday, the Financial Express reported that the government has dropped a plan to ask ONGC to resume sharing its fuel subsidy burden if the Indian basket of crude breaches $70 a barrel, citing an ONGC official.

Analysts say investors will welcome a formal announcement on the matter. “Unless and until there is an official announcement clarifying the subsidy issue, investors won’t feel very confident,” said an analyst who did not want to be named.

Additionally, the ONGC stock was already trading at low valuations so Monday’s jump isn’t particularly exciting. The stock trades at an undemanding seven times estimated earnings for this fiscal year, according to Bloomberg data.

Despite firm crude oil prices, shares of both state-run upstream oil companies—ONGC and Oil India Ltd (OIL)—have underperformed the benchmark Sensex so far this year. Investors fear that these companies will not be able to keep the full benefits of higher crude oil prices, and will be asked to share the subsidy burden.

“We assume that upstream state-owned companies take about a third (of the subsidy burden), but it is possible that the oil marketing companies share in the burden too contrary to what we build into our models,” analysts at Jefferies India Pvt. Ltd said in a note to clients.

So although the upstream companies had a great start to the year, analysts are taking things with a pinch of salt. ONGC and OIL reported a 37% and 34% sequential increase in operating profit, respectively, thanks to the increase in realizations.

According to analysts at Jefferies India, domestic gas prices (up 6% in 1HFY19) should rise another 9% in 2HFY19, while tighter global demand-supply balances should keep oil prices firm too.

As mentioned earlier ONGC’s valuations are undemanding. The OIL stock is not pricey either, trading at seven times estimated FY19 earnings.

Clarity on subsidy sharing would be crucial for investors. Unless that happens, there is little to suggest that the trend of underperformance will reverse for these stocks.