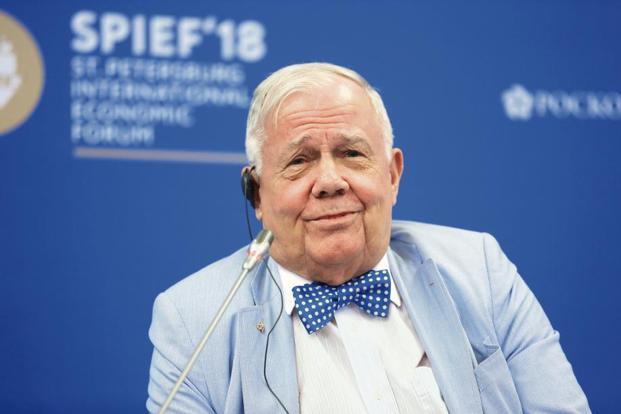 Jim Rogers said that the next global correction will be the worst in his lifetime, but did not give a timeline. Photo: Bloomberg

Mumbai: Veteran investor Jim Rogers said he has not invested in the Indian markets since he exited in 2015, and has missed the rally. However, he was not willing “to jump onto a moving bus, because if you do so, you only get hurt”. In the telephone interview from Singapore, Rogers said that the next global correction will be the worst in his lifetime, but did not give a timeline. Edited excerpts:

Indian markets are at a record high. What’s your take? Did you invest in India after exiting in 2015?

No. I have not invested in the Indian markets. I should have, everybody should have, but I have missed it. I don’t like to buy anything at all-time highs. So, I am doing nothing. I am watching. I am not going to jump onto a moving bus, because if you do so, you only get hurt.

There is a lot of easy money in the world, especially in India, and it is going into the market. That is always worrisome, because when the rest of the world starts having problems, India will have a problem, too.

What do you think of the ongoing trade war situation? What could be the likely outcome?

Something is going to happen to make it sound better. Mr Trump or somebody will put together something that will sound good. But next year, or the year after, when economies around the world have a problem, that is when he (Trump) is going to lash out and have a real trade war, and that will make the next economic problem even worse.

Do you still see a rout in the making in world markets?

The next one is going to be the worst correction in my lifetime. In 2008, we had a problem because of too much debt, but now the debt in the world is much, much worse. Next time, its going to be much worse when we have such an economic problem.

In 2007, when Iceland went bankrupt, nobody had ever heard of it. Then it was the Lehman Brothers that went bankrupt. It was then that people knew that there was a problem. We are not looking at the small things.

Many Indian banks have a problem, and people are not paying much attention to it. There have been bankruptcies in China. Some things can happen, but we don’t know when. I do know we are closer.

Which asset class are you most bullish on? What are you bearish on?

I am most bullish on probably agriculture commodities, Russian government bonds in roubles, Chinese shares, Japanese shares. Some of these assets are depressed and have a chance to rise.

I am most bearish on FANG (Facebook, Amazon, Netflix and Google, which is now Alphabet) stocks in America. They cannot skyrocket from here. They are certainly turning into a bubble. Just because I said I am not optimistic, doesn’t mean I am going to sell them short, because bubbles really do strange things.

Which lesser-known markets have the potential to make it big?

Zimbabwe could be one. It has been a disaster for some years. We are going to have a new government next week. Colombia is very exciting, too.

Would you invest in Saudi Aramco IPO?

I would not invest in Saudi Armaco IPO because oil has been strong and I don’t invest in things when they are strong. I like to invest when it is weak.

What are your thoughts on cryptocurrencies?

I have never had any. I think all the cryptocurrencies are going to disappear one day, and go to zero.