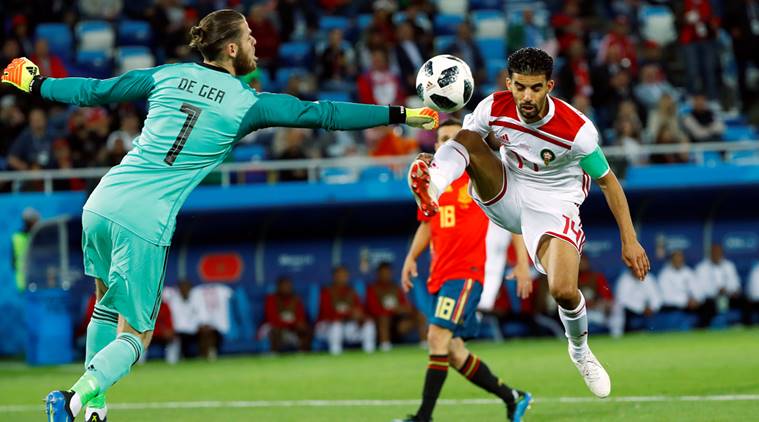 KALININGRAD, Russia — As sports crises go, it doesn’t get much bigger than losing a coach 24 hours before the start of the World Cup. And yet, after three games here, Spain — thanks to a mix of resilience and good fortune — emerged from the chaos as the top team in Group B, setting up a meeting with Russia in the round of 16. 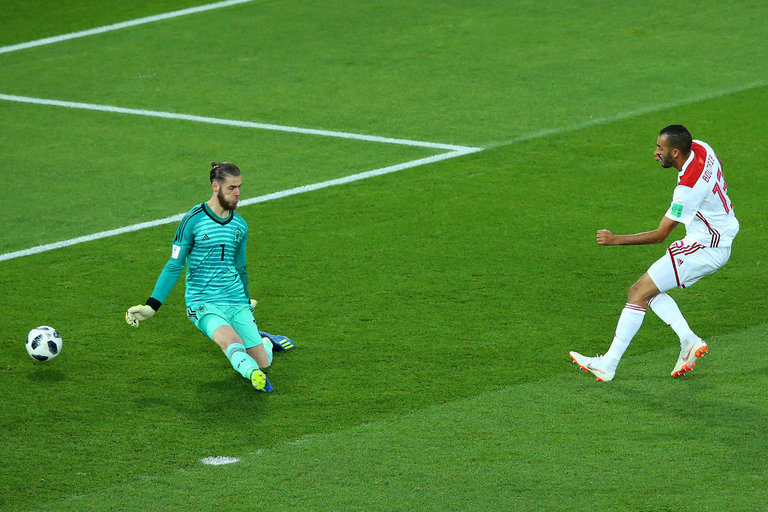 That chaos extended into stoppage time of Spain’s final group-stage match on Monday against Morocco, which had already been eliminated but somehow led by 2-1 as the clock ticked past 90 minutes in Kaliningrad. With Portugal leading Iran late in their Group B game, Spain was poised to limp through in second place.

Then everything turned, thanks to the World Cup’s contentious new innovation: the video assistant referee, or V.A.R.

First, a goal by Spain’s Iago Aspas in the 91st minute was initially disallowed by an offside call. But after a protracted V.A.R. review, it was ruled to be a goal after all, spurring frenzied celebrations on the Spanish bench. It got wilder still, as the V.A.R. delivered a penalty kick for Iran after a review in the 93rd minute against Portugal over in Saransk. Iran converted, securing a draw and lifting Spain to the top spot in the group and sending Portugal to a meeting with Uruguay in the next round.

Emerging from that maelstrom, as well as the bewildering turn that suddenly made him the coach of the Spanish national team, was Fernando Hierro.

“The mini-goal was to emerge on top of the group and that’s where we are now — mission accomplished,” Hierro said after the game. He had arrived in Russia fully expecting to fulfill his role as the team’s director of football, overseeing the work of Coach Julen Lopetegui, not doing it in his place. But then Lopetegui was fired by the Spanish federation after it had emerged that he had negotiated a deal to become Real Madrid’s new coach without telling his bosses.

“I came here in a suit and I will leave in a tracksuit,” Hierro had said about his sudden appointment.

The surreal chain of events before the tournament led many to demote Spain overnight from one of the tournament’s favorites to a possible group-stage casualty. Hierro has tried to play down the effect of losing Lopetegui so close to the tournament, insisting he is in full control of the team.

“Please don’t think whenever I have to make a decision I call Lopetegui to ask his opinion,” Hierro said. Still, he’s aware that there is room for improvement, particularly when it comes to Spain’s defense.

It gave up three goals to Portugal in the opening game, a pulsating 3-3 tie in which Cristiano Ronaldo accounted for all the scoring for the Portuguese. Morocco has nowhere near the talent of Portugal, and has no one like Ronaldo. Yet it managed to expose defensive deficiencies on Monday that Hierro said he knows he’ll need to address if his team is to go any further.

Morocco took advantage of Spain’s high defensive line and seized the lead after just 14 minutes following a mix-up between two of the most experienced players on Spain’s roster. When Andrés Iniesta — the veteran midfielder who scored the World Cup-winning goal in 2010 — and the captain Sergio Ramos got in each other’s way near the halfway line, Khalid Boutaib pinched the ball away from them and raced down the field for an easy finish.

Iniesta got some redemption, providing the assist for Isco five minutes later. But Morocco, backed by thousands of traveling supporters, refused to fade away in what was guaranteed to be its final match at this tournament. Boutaib made another run on goal following a simple throw down field early in the second half. Spain’s goalkeeper, David de Gea, blocked Boutaib’s shot but could only watch as Noureddine Amrabat’s thunderbolt of a rebound bounced back off the woodwork.

Then, with just nine minutes left in regulation time, the substitute Youssef En-Nesyri rose above the Spanish defense on a corner kick and headed home a goal to make it 2-1.

Spain looked to have blown the game, and their chance at winning the group, until Aspas got a flick on to Dani Carvajal’s cross in stoppage time. As he turned to celebrate, though, he could see the linesman’s flag raised, calling offside. The referee stepped in, making the signal for a video review, a new and unlikely emblem for the 2018 World Cup. Amid jeers and whistles, Spain had been saved.

As they trooped off the field, relieved to still be in the tournament, the Spanish players received another bit of good news. Iran’s V.A.R.-assisted penalty had saved Spain from the prospect of a meeting with Uruguay, the tiny South American nation that revels in its nickname of “aguafiestas”, or party poopers, for the number of times it has sent bigger nations crashing out of the World Cup. Instead, Spain faces Russia, which had been overrun by Uruguay earlier in the day.

“Luck of the champion? We will have to see what happens on July 1 at 5 p.m.,” Hierro said, looking forward to the next challenge in his unlikely World Cup coaching career.