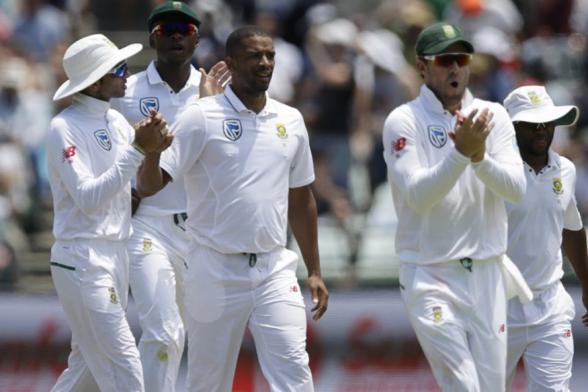 For a half hour or so, the South African pace attack looked… unremarkable. Without Dale Steyn – out of the series with a heel injury – the other three had a difficult task summoning their usual menace. Then came an inswinger. It only decided to be one after travelling three-fourth the distance down the pitch. It fooled Virat Kohli. And it broke India.

Newlands was once again a reminder that Test-match conditions tilted in favour of the bowlers foster compelling cricket. In fact, footage of the fast bowling from both teams can probably replace adrenaline in hospitals. The fourth day alone featured 18 wickets and six of them went to Vernon Philander as his career-best sealed victory for his team, on his home ground, by 72 runs.

In the end, the result highlighted the difference between the two sides, namely that South Africa’s bowlers allowed 48 boundaries in the entire Test and India’s offered 41 in the first innings alone.

Mohammed Shami and Jasprit Bumrah did try their best to make amends. Like a heavy metal song that begins in the guise of a gentle melody, they simply blew batsmen away in the morning.

Faf du Plessis was the worst affected. He did not do much wrong in deciding to press forward to a delivery that under normal circumstances would have come up about waist-high. But in Cape Town, on a surface that spent an entire day under the covers, something crazy happened. The ball banged into the deck, it trampolined up to take the top glove even as the batsman recoiled from the line of fire, and settled in the wicketkeeper’s waiting gloves. Wriddhiman Saha finished with 10 catches, a new national record.

A target of 208 seemed imminently achievable and India did start rather well, cruising to 28 for 0 in seven overs and in that time, M Vijay had already bested two jaffas, ruled out on both of them, but using DRS to continue his innings. Philander made sure the opener wasn’t third time lucky.

Given the new ball from the other end, Morne Morkel bounced out Shikhar Dhawan and then had Cheteshwar Pujara caught behind with a snorter that the batsman had no choice but to play. India were in the mire and in walked their captain.

Kohli’s stay at the crease was purposeful. He half seemed in one-day mode, turning dots into ones and ones into twos. He knew India wouldn’t get too many opportunities to score and so he tried to give himself a leg up – literally. In the hour that he was out there, he made a conscious effort to thrust his front foot down the pitch and in his eagerness to do so, it often slid too far across on off stump. One of his leg glances was played right around his pad. South Africa sensed an opportunity. Philander converted it brilliantly. The game changed from that moment on. Kagiso Rabada came charging in next over and roughed up Rohit Sharma with a ferocious bouncer. The batsman was beaten for pace and would have been out if not for a bit of casual fielding at long leg by Keshav Maharaj – he did not have his shades on and the sun blinded him from even putting a hand on the catch. If India read anything into that moment of fortune, Philander got rid of Rohit five balls later, a loose push away from the body forced an inside edge to crash into his stumps. Hardik Pandya was caught at gully – the same position he was dropped at in the first innings – for 1 with AB de Villiers diving low to his left and rising up to issue a send-off.

In the pre-match presser, South Africa made no pretense that they have a score to settle with India. Come the time to back it up, they were absolutely relentless. De Villiers batted at a level beyond the rest to take the lead above 200. There was a flick through midwicket for four that bowlers might petition to be taken out of the game. Then, a man who was meant to be in a moon boot walked out to bat. Steyn may not be able to play the sport he loves for four weeks, but when his team was nine down and needed him, he shrugged off the pain and put on the pads. South Africa are highly invested in winning this series and they’ve made a near-perfect start to it.